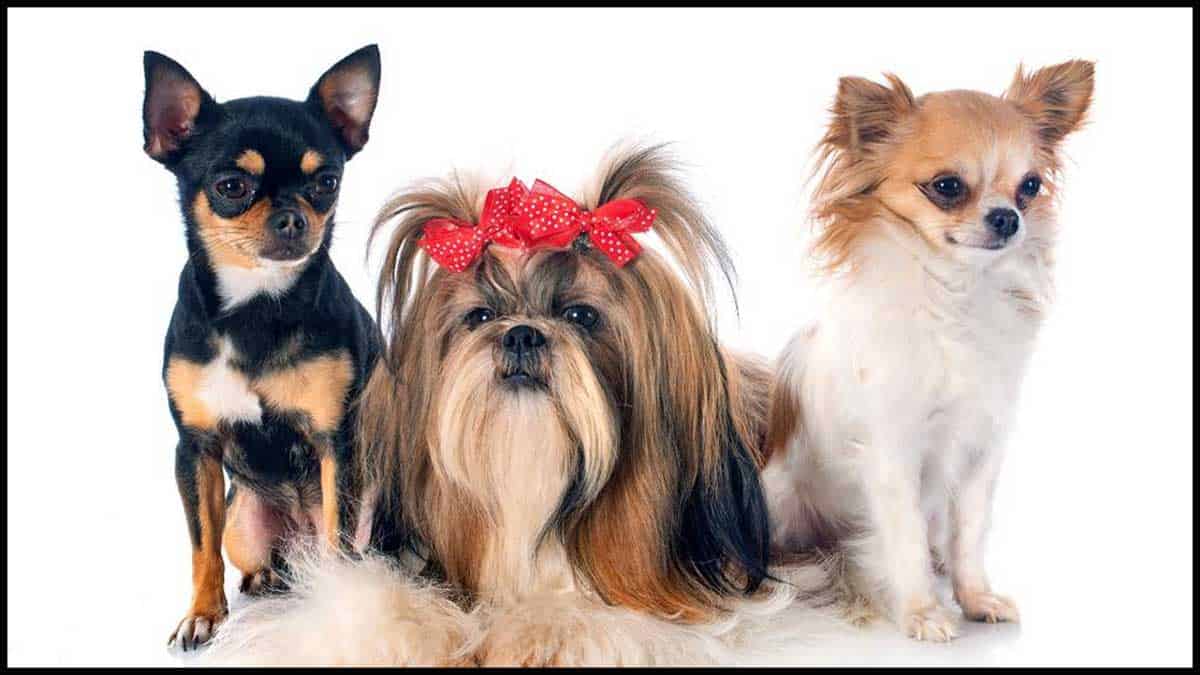 20 Dogs That Stay Puppies the Longest

Americans love dogs, there’s no doubt about that. It’s estimated that the dog population in the United States is almost 80 million and that 44% of households have a dog. Here are the 20 dogs that stay puppies the longest.

We typically get dogs when they’re puppies and form bonds that last a lifetime. It is when they are puppies that our canine friends are still a size we can manage and are perhaps the most irresistible. While they would perhaps never say it out loud, some dog owners may privately wish their puppy would never grow up — these are the states where people love dogs the most.

24/7 Tempo set out to identify the breeds that stay puppies the longest. Dogs reach adulthood at different stages. But some appear to stay puppies longer than others. We compiled the list based on a range of factors for which data were available, including life expectancy and size, as well as other more intangible factors such as temperament, playfulness, and cuteness.

Bichon Frise translates into English as a curly dog. This breed’s most distinctive feature is its white coat, which accentuates its dark, inquisitive eyes. It has been described as a fluff ball of a dog and as a canine comedian, reflecting its winning personality — and securing its place on our list.

Just as Boston is a historic city with a young population, this dog is a relatively old breed with a young heart. Nicknamed “The American Gentleman,” it’s compact and classy. It excels at canine sports and is eager to please and so is popular as a therapy dog.

Named after its city of origin, the Brussels griffon is a toy dog and somewhat larger than others on our list. Its large expressive eyes and flat face give it a unique puppy-like appearance, whatever its age. The Brussels griffon comes in a variety of colors, including red, reddish-brown, and black.

This breed has been popular since the days of King Charles II. It is small for a spaniel and goes through its puppy stage slowly, staying frisky even when older. It also has big eyes and a big heart, which is why it’s on our list.

Named for a state in Mexico, the Chihuahua is the smallest breed of dog. It has a long life expectancy of up to 16 years but looks like a puppy no matter its age. It’s also smart — it has the biggest brain relative to the size of any dog. It has been described by the AKC as “Tiny dog, giant personality.”

The cocker spaniel is the smallest of the sporting dogs and packs a lot of cuteness into a small package. With a handsome face, big soulful eyes, and a tail that wags the dog, it’s no surprise it has topped the AKC popularity rankings at various times over the years. That doesn’t just go for the purebred cocker — all the spaniels and crossbreeds such as the cockapoo have legions of fans who love their handsome features and puppy-like qualities.

The French bulldog has a wrinkly face and protruding bat-like ears. Based on that description alone, you might wonder why it’s on our list. But it’s an irresistible puppy-like dog with a big heart. It’s also bigger than many other breeds on our list and is considered good with small children.

The golden retriever is by far the biggest dog on our list and it doesn’t have a particularly long life span. However, it’s one of the most popular breeds of any size and is adorable as a puppy and as a full-grown adult. Its friendly, gentle disposition makes it one of the best breeds for families.

The Havanese, as its name might suggest, is the national dog of Cuba. It’s small and sociable. A distinguishing feature is its long, silky coat. The Havanese has a long life expectancy and manages to look like a puppy — even when it has an old-man beard.

The Japanese Chin is a toy dog that, despite its name, originated in China. In some respects it is more kitten-like than puppy-like — it likes to climb on top of things and washes by licking its paws and rubbing them on its face. Puppies lose much of their coat between five and 12 months of age and can look almost naked before the fur grows back. Another idiosyncrasy is its fondness for snorting and sneezing.

The Lhasa Apso is an ancient breed from Tibet, where it served as a companion and watchdog in isolated monasteries. It can be cute, mischievous, and deeply devoted — and frolicsome as a puppy or adult. In fact, it’s difficult to tell a puppy from an adult because of the breed’s extensive facial hair and floor-length coat.

The Maltese are an ancient breed and a classic lapdog. It’s small, like the island from which it got its name, dainty, and proud. It also has a fairly long life expectancy. It has a reputation for being affectionate and perky, which are endearing puppy qualities.

Despite its old man face, walrus mustache, and bushy eyebrows, the miniature schnauzer has many qualities that earn it a place on our list. It’s small and sturdy, intelligent and affectionate, energetic, and playful. It’s classed by the AKC in the terrier group, and while it has different traits from the terrier breeds on our list, it shares their puppy qualities and appeal.

The Pekingese was bred to be the lapdog for Chinese royalty and to be small enough to fit inside the huge sleeves of ancient Chinese garments. Surprisingly, it was used as a guard dog and can have an un-puppy like fierceness. It’s a survivor. One of the two dogs to escape from the Titanic was a Pekingese named Sun Yat-sen.

The Pomeranian is the smallest of the spitz breeds, weighing from 3 to 7 pounds. It was made popular by Queen Victoria, who was smitten by its puppy qualities. She had as many as 35 Pomeranians in her kennels and died with one by her side.

The pug is an ancient breed. It has been with us for thousands of years and was recognized by the AKC in the 19th century. It has a distinctive wrinkly face and big, sad sympathy-winning eyes. The pug has a lot of personality in a small package and likes attention and affection — all endearing puppy qualities.

The Shih Tzu is a toy breed with a long life expectancy and devoted fans. It originated in China many centuries ago. Although diminutive in size, its name comes from the Mandarin word for lion. The breed began appearing in the U.S. after World War II when returning veterans brought their pets back to America.

The toy fox terrier is energetic, intelligent, and playful. It was bred in the last century for its size and hunting ability. Farmers who wanted a particularly small dog to catch rodents crossed fox terriers with toy dog breeds. The toy fox terrier was not registered by the American Kennel Club until 2003.

The Yorkie is a very popular toy breed that grows up to a mere 7 pounds. Its confidence and playfulness have earned it the nickname “the tomboy toy.” While it stays puppy-like for a long time and is easy to baby because of its size, the Yorkshire terrier requires a lot of care and attention.

With their bright eyes, sturdy little bodies, and pink ears, westies are hard to resist. Bred to hunt rodents in Scotland, they love a good chase but are also great family dogs. Like other dogs in the terrier group, the westies are feisty and energetic.