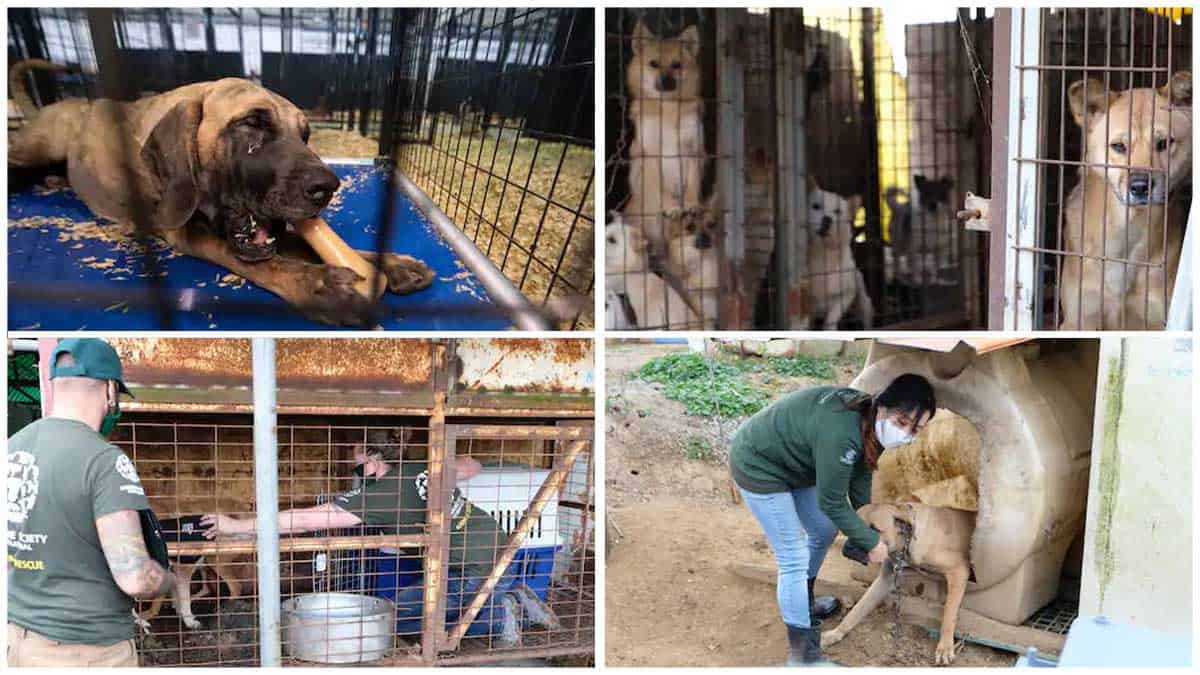 South Koreans are turning against eating dog meat. This is giving 200 rescued dogs a chance for a new life in the United States and Canada.

In late October, 196 dogs arrived at Dulles International Airport. This was after they were rescued from captivity in tiny cages on South Korean dog farms. These farms are gradually closing down as demand for dog meat is declining.

Some dogs have been sent to shelters across the United States and Canada. Others will be given behavioral training to ensure they are ready for their new roles as family pets. Since January 2015, the Humane Society International (HSI) has taken about 2,000 dogs from 17 former dog farms in South Korea.

About 120 dogs from the October flight remain at the shelter in Hagerstown, Md. The other dogs have been moved to nearby shelters or placed with a foster family. This was by Kelly Donithan, a senior specialist at HSI who was part of the rescue team in South Korea.

One of the dogs in a temporary foster home is a pregnant 1-year-old Chihuahua named Cassie.

“It’s going to be a process to get her to understand she’s not going to be mistreated,” said Debbie Patten, who is caring for Cassie at her home in Warrington, Va. “With time and a lot of patience, we are going to bring her around.”

The dogs in Hagerstown are kept in rows of pens, each equipped with bedding, food, water, and room to move. Some of the most traumatized dogs may need to be spaced apart or have visual barriers around their pen. Other dogs, particularly smaller ones, may require extra space to hide inside their pen.

“Some of the most traumatized dogs are slowing adjusting to their new surroundings,” Donithan said. “We try to make sure that we don’t put animals out into homes too quickly.”

South Korea has long been one of the Asian dog meat trade centers. But attitudes there are changing as pet ownership rises and concerns about animal cruelty mount.

A poll released by HSI in October showed that 84 percent of South Koreans have not consumed dog meat in the past or do not plan to. Meanwhile, nearly 59 percent said they would support a ban on the dog meat trade. That’s a sharp rise fromjust35 percent in a 2017 poll by Nielsen commissioned by HSI.

Dogs have long been eaten in South Korea, China, Vietnam, the Philippines, and parts of Africa. Consumption is often concentrated in particular regions or times of the year.

Many countries resent the West’s fixation on the issue. They argue that the dog meat industry is no worse than factory farming and eating other animals. To them, critics are guilty of racist double standards.

But there are also growing animal rights movements within Asia opposed to the dog meat trade, and it is banned in Hong Kong, Singapore, Taiwan, and Thailand. In Switzerland, where dogs and dogs and cats have been eaten in some isolated rural areas, the commercial sale of dog meat is banned.

Still, at least 1.5 million dogs have kept on nearly 4,000 registered farms in South Korea, according to the Korea Dog Meat Farmers’ Association. That’s around half the 3 million dogs farmed two decades ago. The industry favors nureongi, yellow dogs, tosas, and jindos, but many other breeds are found on the farms.

Nearly 3,400 restaurants across the country serve dog meat, which is especially popular during hot weather and the three-day summer boknal (“dog days”) period.

Some Koreans believe dog meat, often consumed in a stew called bosintang, helps boost stamina and virility during hot weather. It is also boiled with herbs to form a tonic called gaesoju, which is also believed to boost stamina and aid postoperative recovery.

But the cruelties of the trade — where dogs are kept in cramped, rusty, and elevated cages above piles of feces before being electrocuted — are finally beginning to sink into the popular consciousness.

The 200 Rescued Dogs Aren’t the End of the Story

Many dogs are diseased and pumped full of antibiotics. Historically, they were often hanged or beaten to death, believing this enhanced their taste and health benefits before animal-protection laws largely put a stop to these methods.

At a farm set among paddy fields in Seosan, about 75 miles southeast of Seoul, 61-year-old owner Kim Il-hawn helped HSI workers on Oct. 22 collect 170 dogs from cages where they had been awaiting death. The other 26 dogs came from different farms that closed earlier.

Kim said he felt “rather relieved” to finally see his farm close after four decades in the business.

“The way television depicted dog meat as cruel made me feel guilty about the work I do,” he said. “At one point, I found myself feeling pity for the dogs at my farm.”

Some of the animals growled as the humans approached. Others, somehow still trusting of humans, allowed themselves to be stroked and petted.

“I know this farm is bad for them,” Kim said. “That’s why I am releasing these dogs because I know they are going to be having a better life in America.”

Kim said the price of dogs had fallen by half in recent years, another reason to get out of the business. But he couldn’t resist a quizzical comment on the animal rights workers who seemed “obsessed” with his dogs.

“They treat the dogs like we pay respect to our seniors,” he said. “I don’t know what’s up with them.”

Joo Young-bong, head of the Korea Dog Meat Farmers’ Association, accused groups such as HSI of exploiting dogs as a means of soliciting donations.

“Dog meat is part of Korean traditional cuisine,” he said. “Having them take dogs from our farms and fly them out, it’s like shaming Korean culture.”

Dog meat, he insisted, is healthy and ethically no different from eating fried chicken. “Chickens are also cute animals. Why enforce a double standard for dogs?” he asked.

But HSI’s Flocken insists his organization also seeks to shut down factory farms in the West.

In Seoul, HSI campaign manager Nara Kim pointed out that the change in attitudes was coming from within South Korea itself.

“It’s been very surprising; things are changing very fast,” she said. “It’s one of the things Koreans do — we start realizing something and change very fast.”

Korea’s National Veterinary Research and Quarantine Service says the number of pet dogs rose to 6 million in 2019, up from 4.6 million in 2010. Television shows feature dogs and their devoted owners, while pampering pets and dressing them up in fashionable clothes are increasingly popular, representing a valuable and rapidly growing market.

President Moon Jae-in even has a rescue dog himself. Tori, Korea’s First Dog, a small black mixed-breed, had languished in a shelter and was at risk of being sold into the dog meat trade before being rescued by the animal rights group CARE and adopted by Moon in 2017.

Tori turned up at a protest of the dog meat trade in Seoul in 2018, apparently dropped off there by Moon’s daughter.

As a presidential candidate, Moon had promised to phase out the dog meat trade but has been silent on the issue since taking power, despite a petition signed by 200,000 people.

His government now says it needs to consider the livelihoods of people engaged in the business and expects “the system to change gradually in line with social discussions.”

Many dog farmers also sell animals into the underground dog fighting business, and some of the animals rescued last week were aggressive and understandably distrustful of humans.

But Flocken said the vast majority would be ready to find their “forever homes” after some weeks of behavioral training. The few who are too terrified and anxious to live with people will be sent to a specialist shelter, where they will receive “incredible care.”

Last year, Flocken adopted a 5-year-old Golden Retriever from a dog-meat farm. It has taken months for Chewbacca to become less anxious, Flocken says, and “he’s still a little rough around the edges — but he’s part of our family now.”

Some dogs from the latest rescue mission in South Korea are already getting used to a domestic routine.

The Future of These Pups

Patten, 62, who is taking care of the Chihuahua, Cassie, said the dog has spent most of her time in a crate in Patten’s room since arriving Oct. 23. Initially, the dog wouldn’t come out at all when Patten was around. Now she’ll inch out for a pet when Patten sits by the crate, only to quickly retreat back inside.

“I’m just going with my instincts,” she said. “I’m not pushing her. It’s a lot of Google reading.”

Anna Frostic, senior vice president of programs and policy at the Humane Society, has taken in a 4-month-old puppy, a yellow lab mix with white spots on her toes and chest, to her Virginia home in Alexandria’s Old Town.

“It’s pretty remarkable that she’s been able to adopt so quickly as a pet,” said Frostic.

So far, the pup mainly sleeps and “continues to roll over from one cute position to another,” Frostic said. When out for a walk, “she can’t be more excited to say hi to everyone.”

She’s still finalizing a name, but Frostic said it will probably be saeloun, Korean for “new.”