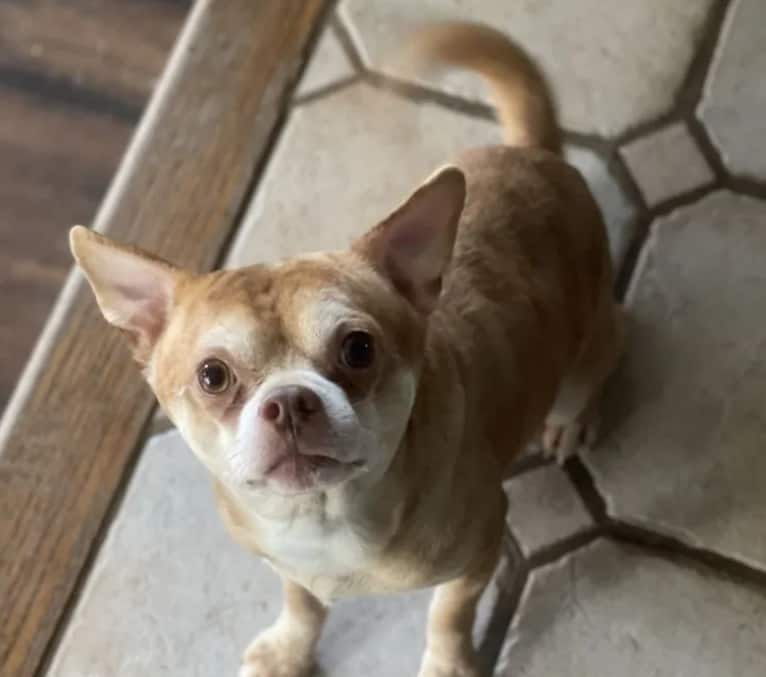 She is going once, going twice for the “neurotic, man-hating, animal-hating, children-hating” dog who looks like a gremlin. A tweet about a “demonic Chihuahua” named Prancer, who is up for adoption, has gone viral on Twitter. Due to the brutally honest description written by his foster owner of what potential adopters could expect from the dog.

Have you ever heard of a Chihuahua described as a “haunted Victorian child”? What about a “Chucky doll in a dog’s body”? Well, now you have!

Tyfanee Fortuna, Prancer’s current foster owner, shared a post to Facebook on April 7 with some photos and videos of the two-year-old pup. Trying to find a way to make the dog sound appealing to future adoptive owners.

“I’ve tried for the last several months to post this dog for adoption and make him sound… palatable”” she wrote. “The problem is, he’s not. There’s not a very big market for neurotic, man-hating, animal-hating, children-hating dogs that look like gremlins. But I have to believe there’s someone out there for Prancer because I am tired, and so is my family. Every day we live in the grips of the demonic Chihuahua hellscape he has created in our home.”

Fortuna wrote that fellow Chihuahua owners would understand what she was talking about. Prancers embodied the” Chihuahua meme that describes them as being 50% hate and 50% tremble.”

This dog would be a problem at that moment.

“If you’re intrigued and horrified at how this animal sounds, just wait… There’s more, e,” she added.”Prancer came to me obese, wearing a cashmere sweater with bacon, egg, n cheese stuffed in his crate. I should have known this dog would be a problem at that moment.”

She explained that his previous owner was an older woman. She treated Prancer like he was a human and didn’t socialize with him.

“Sprinkle in a little genetic predisposition for being nervous. And you’ve concocted a neurotic mess, AKA Prancer,” she wrote. “During his first week, he was terrified to have a personality. As awful as it sounds, I liked him better that way. He was quiet and just lay on the couch. Don’t bother anyone. I was excited to see him come out of his shell and become a natural dog. I am convinced at this point he is not a wild dog. But more like a vessel for a traumatized Victorian child that now haunts our home.”

She also made an epic reference to” The Office” in terms of how Prancer gets along with other animals.”We have somewhat agreed that it’s wrong to attack the other animals,” she explained.”But you know that episode of the Office” where Michael Scott silently whispers I’ll kill you” to Toby? That’s Prancer having to coexist with everyone when I’m around begrudgingly.”

Prancer also tastes in humans because they only like women, so if you have a husband, “don’t bother applying unless you hate him.”

I think at this point.

“We also mentioned no kids for Prancer. I think at this point. You can imagine why,” she added.”He’s never been in the presence of a child, but I can already imagine the demonic noises and shaking fury that would erupt from his body if he was. Prancer wants to be your only child.”

DespitePrancer’ss oddities, Fortuna said he has some good traits, including his loyalty and penchant for companionship. She wrote,” He likes to go for car rides, he is housebroken, he knows a few basic commands, he is quiet and non-destructive when left alone at home, and even though we call him bologna face, he is kind of cute to look at. He also smiles” when he is excited.”

Fortuna understands that Prancer might be a hard sell and that”finding someone who wants a Chucky doll in a dog’s body is hard.”

“If you’ve always wanted your haunted Victorian child in the body of a small dog that hates men and children, please email njwoof@cs.com,” she wrote.”Oh, also, he’s only 2yrs old and will probably live to be 21 through pure spite, so consider that if you’re interested.”

Prancer is available for adoption through Second Chance Pet Adoption League, located in Morris Plains, New Jersey. Even with the colorful description of Prancer given by Fortuna, Stephanie Pearl, a representative for Second Chance Pet Adoption League, told TODAY via email that they have had inquiries nationwide for potential owners wanting to adopt him after sharingFortuna’ss post on their Facebook page, but are only accepting local applications for the potential adopter to meet with him and form a connection.

“We have had lots of lovely well-meaning people inquiring, and we hope that every one of them goes to their local shelter or rescue and opens their home to a needy dog like Prancer… well, maybe not just like Prancer, but there are so many homeless dogs in need,” she wrote.

Pearl said Second Chance Pet Adoption League specializes in”misunderstood little ones,” much like Prancer. They need specific homes due to their fears, lack of socialization and training, and authoritarian pasts. She also says that anyone looking to adopt a new canine friend into their family should not overlook the”underdogs.”

“No matter what personality, breed, size, or age you are looking for, you can find your match in a shelter or rescue somewhere,” she wrote.”And consider being a foster home! Prancer is only alive, adored, and now scarily famous today because his foster mom stepped up and rescued him to keep him from being euthanized or brought to a shelter where his unique, um,” attitude” may not have been understood or appreciated.”

Prancer’s unique personality melted the hearts of many on social media, who have become personally invested in his adoption journey and are still thinking about him after the viral post.

“I hope Prancer the chihuahua finds his forever home. I love you, sweet devil prince,” one person tweeted.

Another user wrote,” just read the adoption ad for Prancer the Haunted Victorian Chihuahua, and I damn near choked on my tea. What a treat. Someone, please adopt and love this dog.”