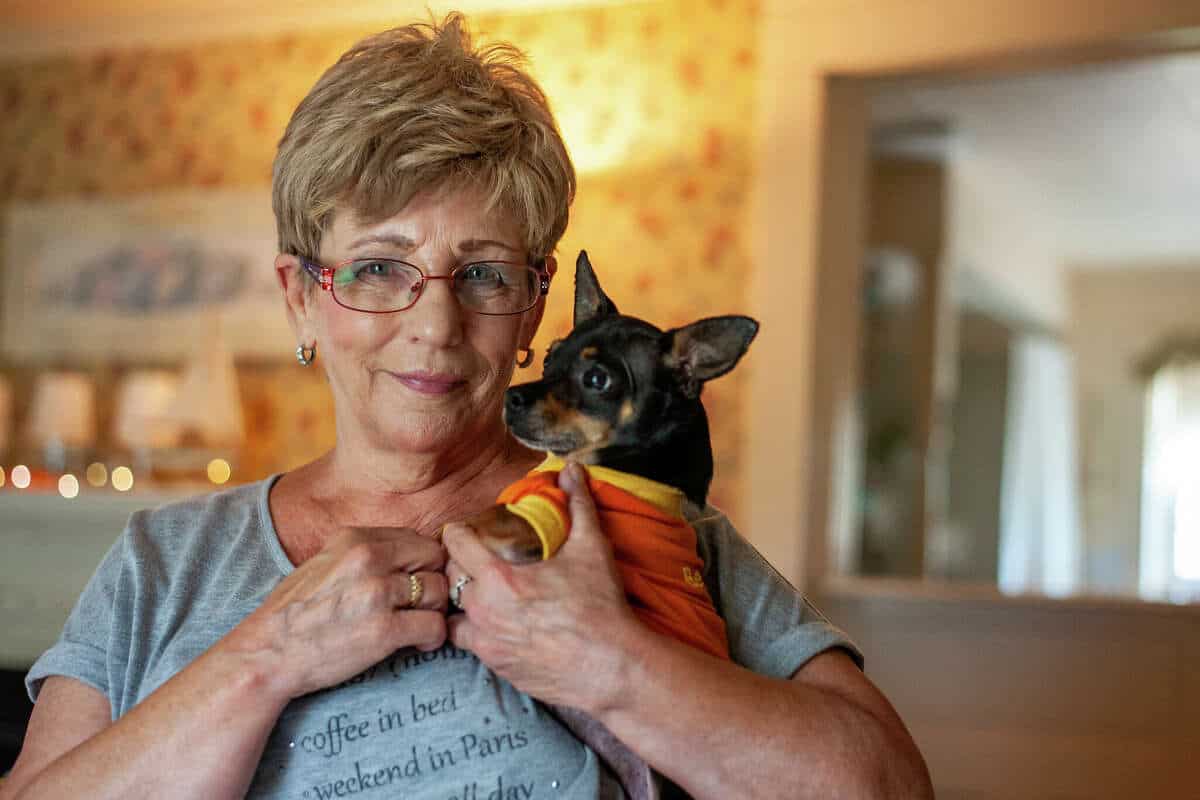 Buddy’s back: Midland dog found after losing half his weight.

‘I do not know how he did it, but I am sure glad to have him back

Dawn Hartley had resigned herself to the inevitable. It was time to stop looking for her Buddy.

After three weeks of Facebook posts, contacting neighbors – and hoping – she accepted the reality that her canine best friend was never coming home.

Then, miraculously, she received the call she had been waiting for the next day.

Against all odds, it had found the six-pound Chihuahua after almost a month on the run. The wayward furball returned to Hartley three pounds lighter, but the bond between the two is more vital than ever since their reunion.

“We were close (even before he got lost),” Hartley said. “He is like my second skin.”

Hartley adopted Buddy about three years ago as a 1-year-old rescue. Before going missing, he was a scared dog and shied around everyone aside from her.

While Buddy can be a wanderer, Hartley said he typically stays close to her.

One day, in the second week of August, Hartley went outside and through her backyard gate. An hour later, she noticed Buddy was nowhere to be found and assumed he had followed her out of the gate.

This realization was shortly followed by neighbors telling her they had spotted Buddy out on his own. Further sightings reported that he was seen crossing Lyon and Patrick roads. The tiny, fuzzy phantom roamed the grounds of Dow and made his way to the Tittabawassee River, near Dow Diamond and the I-Park. This area contains industrial operations of companies like Dow and DuPont.

I-Park workers occasionally spotted the dark-haired Chihuahua, but they could never catch up with him. Hartley and Gwen Drake, founder of the Midland County Pit Stop animal rescue group, said they were in contact with security and workers in the I-Park during the search.

“They were watching for him, but they could never find him,” Hartley said. “(Buddy) was very evasive.”

Rachel Miner, DuPont production leader of APT in Midland, said when workers saw a post about Buddy in the AskMidland Facebook group, they put up missing pictures of Buddy on her building’s bulletin board due to the close vicinity of where it had spotted the dog.

“Not long after they did that, we saw him run by the building,” Miner said. “Everyone was like, ‘Oh my gosh, it’s Buddy!'”

It is rare for stray animals and lost pets to wander into the I-Park, so workers were surprised to see him running around there. One of Miner’s engineers put out food and a dog’s bed to lure him in so they could catch him. Miner added that there were seven or eight Buddy sightings around the building. However, he would always run away when workers approached him.

Hartley and Drake grew concerned about Buddy’s well-being and the predators he might encounter. Coyotes, raptors, and even raccoons could have targeted the tiny dog during his walkabout. Luckily, he only suffered bug bites while missing, Hartley said.

While these dogs may not be natural hunters, Drake said Buddy probably went into survival mode and may have tried hunting for food, though he may not have been successful. The food put out by DuPont workers might have helped Buddy survive in the wild.

“The resiliency (of Buddy) is amazing to me,” Drake said. “The fact that this dog was not hurt by an animal, hit by a car, (or) anything like that is huge.”

He did not capture Buddy on the I-Park property. Two weeks ago, a resident spotted the severely dehydrated and malnourished Chihuahua inside an old car near R W Electric. A couple of people helping Hartley look for Buddy reached out to her with the news.

Drake was the one who delivered the news to Hartley – Buddy was back.

Once Buddy’s weakened body – he could not walk – was back in the arms of Hartley, she immediately went to an animal clinic to get him some much-needed water, food, and rest. The dog was half his regular body weight when he was ultimately found.

In the two weeks since his return, Buddy has been eating regularly and has regained most of his weight. Even though he is still skittish, Hartley said Buddy seems calmer and more confident since his return.

If a pet goes missing, Drake suggests that the owner post photos and descriptions in Facebook groups such as Lost Pets in Midland, MI, and contact local animal shelters. She also highly recommends pet owners microchip dogs and cats with up-to-date information so they can return lost animals to owners sooner.

Once a pet is found, Drake also said pet owners should test them for parasites since they were likely eating dead animals and trash if they were missing for a long time. She also implores people who see pets wandering outside to help that animal in some way, if possible.

“Whether you can stop and help that dog or not, find some help (and) do something.”