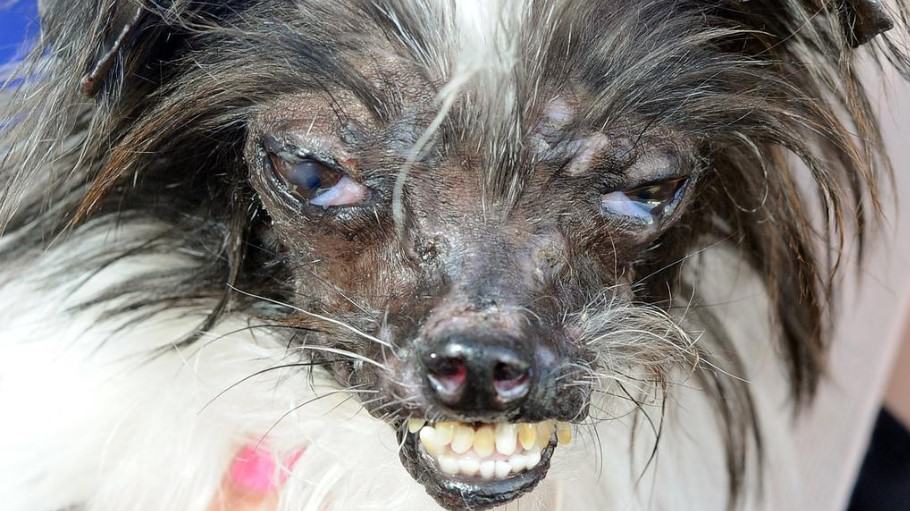 A MUTT severely burned as a puppy has been named the World’s Ugliest Dog. His owner couldn’t be more proud.

It’s that time of year again when dogs with giant heads, hairless bodies, and other oddities compete to be the World’s Ugliest Dog.

Although Peanut is healthy now. His owner, Holly Chandler of Greenville, North Carolina, says he was seriously burned as a puppy, resulting in bald patches all over his body.

Peanut’s owner plans to use the prize money to pay the vet bills of abused animals.

“We’re trying to use him as a poster child for what can happen to abused animals,” she said.

In the running… SweePee Rambo, a Chihuahua/Chinese Crested mix. Her owner holds it during the World’s Ugliest Dog Contest in Petaluma, California.

The contest, held at the Sonoma-Marin Fairgrounds in Petaluma, California, is in its 26th year.

The dogs are scored by a three-judge panel in several categories, including unique or unusual attributes, personality, and natural ugliness.

Josie, a Chinese Crested, sticks out its tongue at The World’s Ugliest Dog Competition.

The past five winners have included a duck-footed beagle, boxer and basset hound mix with a waddle, a Chinese crested and Chihuahua mix with a protruding tongue and short tufts of hair, and a Chihuahua with a missing eye and a camel’s back.

Short but sweet. Quasi Modo, whose owner claims has a back that’s too short for its body, struts its stuff onstage at The World’s Ugliest Dog Competition.

Contestant: Icky looks over the shoulder of his owner Jon Adler before the World’s Ugliest Dog Contest starts.