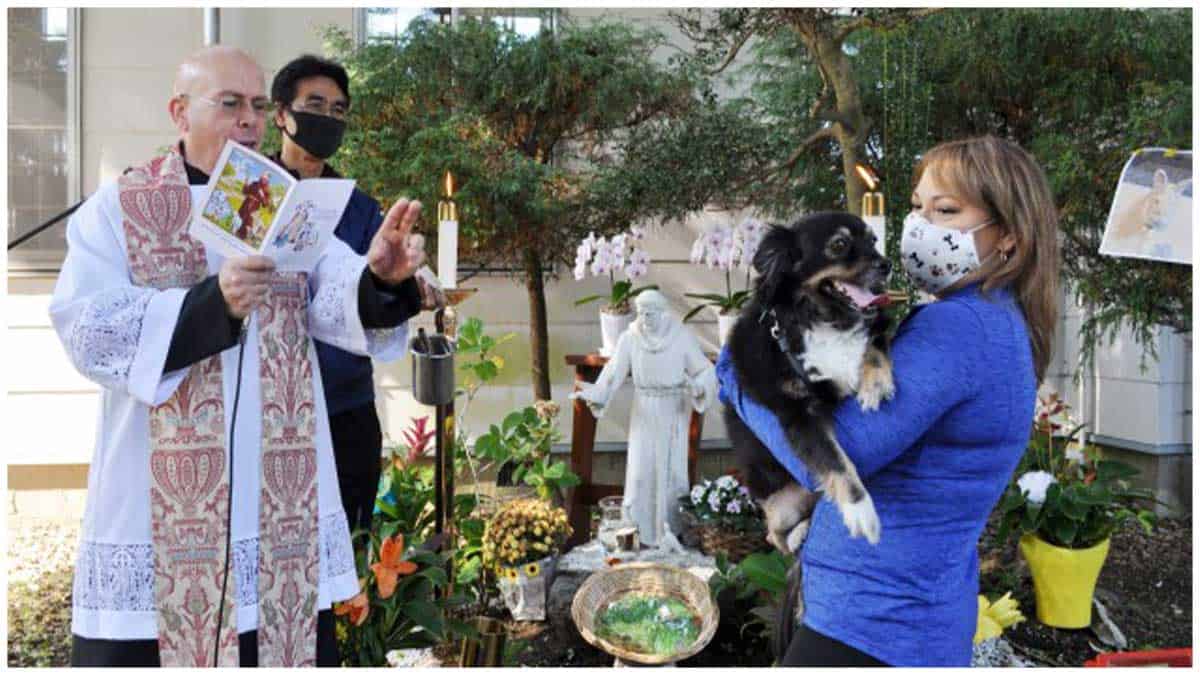 As Chaplain (Lt. Col.) Alan Irizarry set up an altar in a garden next to the Camp Zama Chapel for the St. Francis Blessing of the Pets and Animals.

Meanwhile, peaceful music played in the background. Soon a few barking dogs arrived to chime in, and it was also music to Irizarry’s ears.

“The pets are going to be barking and making noise,” Irizarry told pet owners who had gathered for the Holy Family Catholic Community pet blessing at the chapel Oct. 31, “but that’s wonderful, right? They give you so much joy and so much happiness. I enjoy it a lot.”

Each year, many Christian communities throughout the world celebrate the feast of St. Francis of Assisi, Oct. 4, with a blessing of the pets on or near the feast date. St. Francis, born in Assisi, Italy, in 1181, is the patron saint of animals, archaeologists, ecology, Italy, merchants, messengers, and metal workers.

Irizarry, the operations chaplain for U.S. Army Japan and a Catholic priest, individually blessed a Sugar glider (a nocturnal, possum-like animal indigenous to Australia) named Gizmo; a trio of goldfish named Alma, Merna, and Chito; a rabbit named Pokey; and 10 dogs with a variety of names, breeds, and temperaments.

Irizarry opened the ceremony with a prayer to God that included, “We thank you for giving us these pets who bring us joy. As you take care of us, so also we ask your help that we might take care of those who trust us to look after them.”

Harold and Carmen Rivera said they brought their dog Pepito, an 8-year-old Chihuahua, and Collie mix, to the blessing because he is an important member of their family.

“He is very friendly and he is our best friend,” Carmen Rivera said.

Harold Rivera agreed, saying, “[Pepito] keeps us good company. We’re empty-nesters, so he’s like our next thing after our kids.”

Meanwhile, Douglas Stewart, owner of Gizmo, said he and his wife Mamiko had had Gizmo for about eight years, and they wanted to take advantage of the opportunity to have a priest bless him.

“I’m part of the Catholic community here, and Gizmo is part of our family, so I wanted to get him blessed as we [get blessed] every time we go to church,” Stewart said. “We love him and we want to take care of him for the rest of his life.”

Michael Silang said he attended with his family and their dog Keiko, a 4-month-old Pomeranian because Keiko is their first pet ever and the blessing was an important opportunity.

“We’ve had her for four months,” Silang said. “She’s a stress reliever. And, she’s a joy. She’s very energetic.”

Irizarry concluded with a final prayer, thanking God for all the animals, birds, and fish in the world.

“We ask you, Lord, that we may be good to our pets always, so that they may be happy also,” Irizarry said during the prayer. “Help us always to take care of them so that they will be healthy.”

Refreshments after the ceremony included hot dogs for the humans and treats for the dogs.