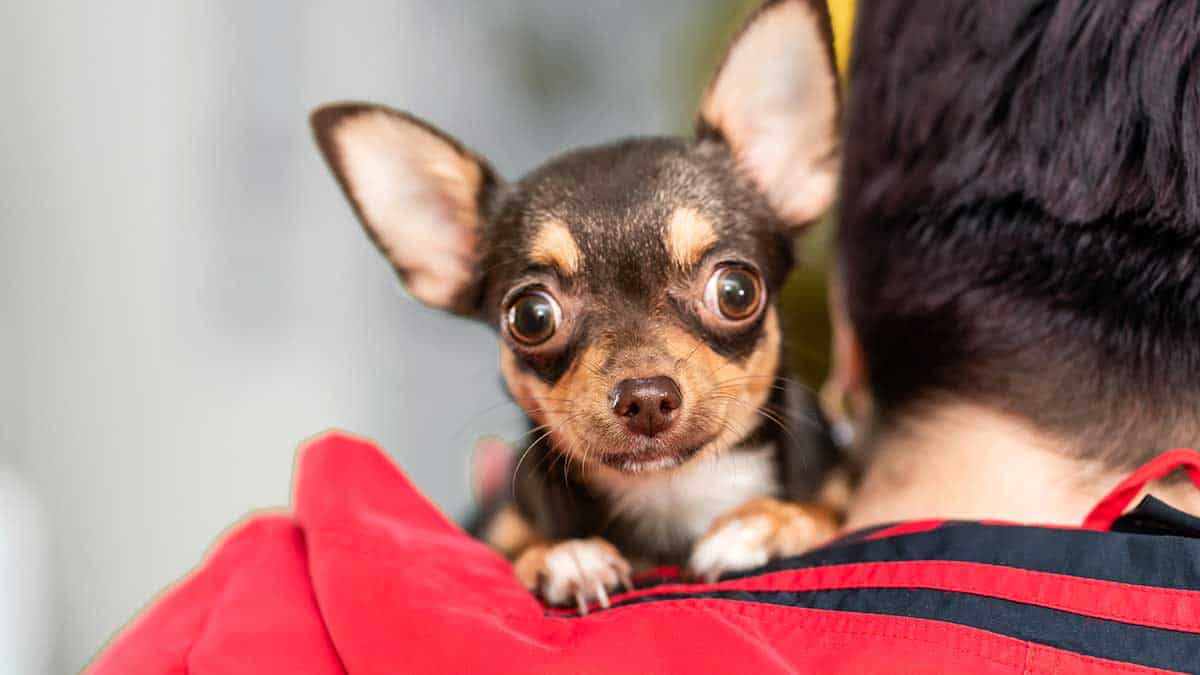 Do you think that Chihuahuas can see ghosts? Before you go ghost hunting with Fido, we’ve scared up some info that will shed some spooky light on the subject.

We all think our Chihuahuas have a heightened sense of intuition. You know what I mean; that special, unspoken ability to channel our thoughts and react accordingly (cue Chihuahua gently placing a paw on hand of troubled pet parent).

We already know that it’s not new news that they’ve been documented as recognizing and responding in an alert-type manner to medical episodes such as impending seizures and various forms of cancer. Or, that they seem to sense an approaching storm even before the weather app picks it up; who can forget the stories of wildlife seeking higher ground just before the devastating tsunami that ravaged the beaches of Thailand.

And as we have all likely experienced, they are pretty quick to size up strangers and zero in on any negative vibe to help us discern friend from foe.

So, is it possible? Could our best buddies actually have that mysterious sixth sense known as extrasensory perception (ESP)?

Many studies have explored the possibility and while some experts tend to pass it off as simply super-heightened natural senses, none have actually stated that it is categorically impossible for Rover to possess psychic abilities.

So, lets take a giant step back. From a strictly practical standpoint, we all know that just like humans, canines have five basic senses: sight, smell, taste, touch and hearing. And because three of these five senses (sight, smell, and hearing) are extremely powerful in Chihuahuas, its quite possible that his sudden pause by the photo of your late Aunt Bessie isn’t because he has just seen her ghost wafting by, but because he’s picked up on an unusual sound in the far distance or a faint but intriguing smell. Can we agree on that?

Stay with me, because there’s more. Adding to the argument being made by all those psychic skeptics out there is the superior field of vision that a Chihuahua is known to possess – particularly when it comes to spotting movement well beyond your scope of vision or spookily enough… during the twilight hours.

But it’s this heightened sense of sight and his ability to spot all things that lurk in the dark (yet are invisible to the human eye) that gives pet parents across the globe just one more reason to believe that Rover really does pack a supernatural punch.

Further supporting the “I refuse to believe it” theory are studies that were done by the University of Florida. Their research has shown that Chihuahuas who live in a loving home is more inclined to cue in on their owner’s body language and respond more quickly and intuitively to emotional moments than are their shelter counterparts; so you now have an argument for nurture versus nature.

In other words, research implies that the super tuned-in trait that has your pooch picking up on and responding to your deepest, darkest feelings is simply a learned reaction that stems from communal living versus a psychic hot-line to your inner soul.

This practical and rather rational theory is also supported by best-selling author, psychologist and expert in all thing’s “dog”, Stanley Coren. He feels that it’s a canine’s super-receptive reaction to stimuli that allows our four-legged friends to anticipate phenomena. Take, as just one example, the sudden change in barometric pressure that would have preceded the tsunami in Thailand or for that matter, any major weather event.

Animals are quick to pick up on that change along with the accompanying smells that come with any dramatic swing in weather conditions. Think of that strong smell of ozone that precedes a rainstorm. The animal’s natural instinct for self-preservation tells them to head for higher ground… or in the case of my Chihuahua, to hide under the bed.

So, let’s check with another authority. Dr. Mary Burch, Director of the Family Dog Program for the American Kennel Club (AKC) tends to feel that for those pet parents who are already open to accepting paranormal phenomena, it’s quite likely that some of their pooch’s odd actions and manners simply play into this belief.

Suddenly stopping, staring or barking by the favorite chair of a deceased loved one or exhibiting behaviors that may look like he is sensing an apparition can understandably lend credence to the desire to believe. But Burch also places value on the basic, gut instinct that a Chihuahua will often simply run with. Unlike humans who tend to analyze and over-think before they react, a Chihuahua will act on his initial feelings.

He will growl if he doesn’t get the right vibe from a stranger, stop dead in his tracks if he hears or smells something out of the norm and be quick to bark at something he sees in the dark. Burch comments, “Dogs are remarkable creatures, with senses that far exceed a human’s”.

Now if you’re still convinced that your pooch’s behaviors are in fact channeling the other side, you may be interested in the findings of Los Angeles-based Certified Dog Behavior Consultant Russell Hartstein.

With over 30 years of applied behavior analysis under his belt that includes work with renowned primatologist Dr. Jane Goodall, he states that in spite of all the rational explanations for how our pooches appear to have psychic powers and the fact there is a lack of scientific evidence to support it, the truth is we just don’t know.

Hartstein claims that “The most interesting part of the science of dog behavior and understanding is that we simply don’t know so much”. So, is Harstein a believer? Maybe not yet, but he clearly hasn’t closed the door on the possibility.

And this is where it gets interesting because in spite of his reference to the lack of “scientific proof”, there are studies that show our furry friends possess special molecules in their eyes that allow them to sense the earth’s magnetic field.

Cryptochromes are light-sensitive molecules that exist in the retinas of 90 species of mammal and these are now known to include dogs (but not cats). Researchers from the Ludwig-Maximilians-University Munich, the Goethe University in Frankfurt, the Universities of Duisburg-Essen and Göttingen as well as from the Max Planck Institute for Brain Research in Frankfurt claim that animals possessing this molecule may have a magnetic sense that is linked to their visual system.

Now if all of this is starting to sound a little too complicated, you should know that for many mammals, the earth’s magnetic field is key to helping them with orientation and navigation.

So, the natural abilities of creatures possessing this extra magnetic sense are already recognized by researchers. It just hadn’t been determined that dogs also possessed this, dare I say it…. supernatural power.

And this is where we hit the “draw your own conclusion” portion. For as long as ghost hunters have existed, they (and those who believe in the paranormal) have put forth that spirits are able to generate their own electromagnetic fields.

If that is the case, is it such a stretch to believe that our pooches are able to pick up on it? And that when they bark into the night or hesitate by a loved one’s favorite resting place, that it isn’t just by coincidence? The jury is still out on this one!