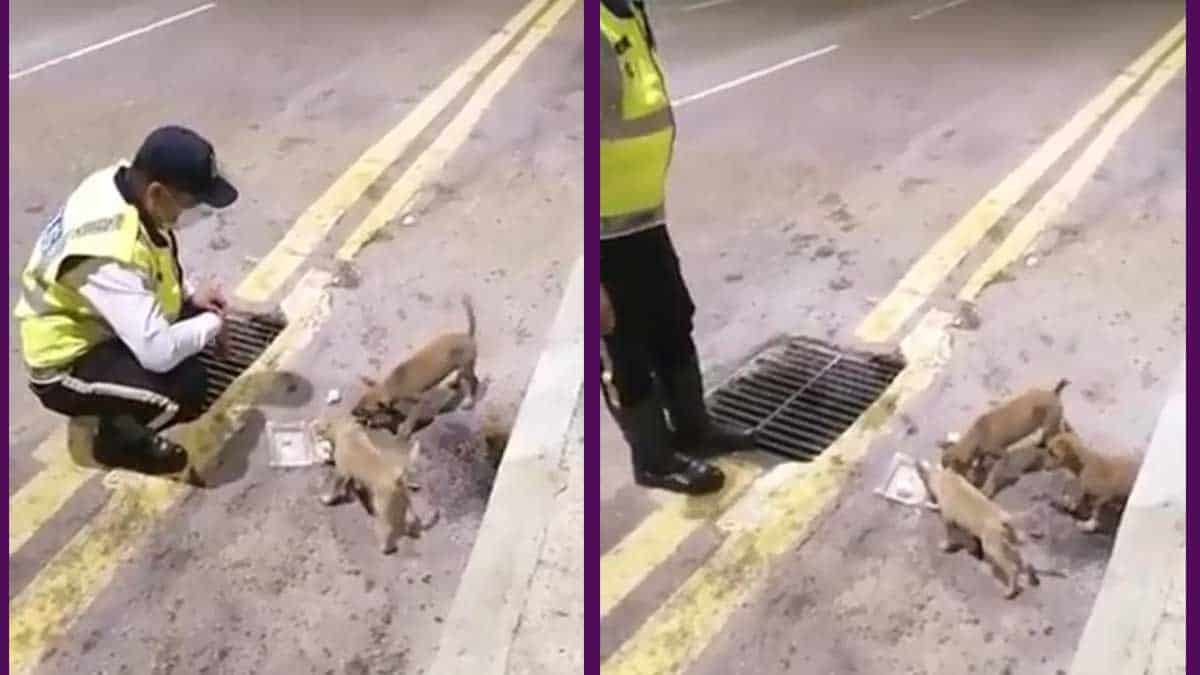 People aren’t the only ones having a tough time during the Covid-19 pandemic.

Animals — especially stray dogs and cats — are no doubt facing even greater difficulty in their search for sustenance, with fewer people roaming about and food scraps to rummage through.

Thankfully for three starving puppies, a kind frontline officer went out of his way to get food for the little pooches, as shared in a video on Facebook user Aman Shah II’s page.

Uploaded last night, the 22-second-long video, depicts a traffic police officer — presumably a frontliner manning a roadblock — on the curb of the main road with a packed meal in hand.

The three mongrel puppies seem to be taking shelter from the heat, hiding away in the not-so-safe drainage culvert on the side of the road.

In a bid to get them out of the hiding spot, the officer squatted down and can be seen easing the plastic container closer to him.

While one was a little hesitant to leave its sanctuary at first, after seeing its siblings safe and sound, enjoying their meal, the cute pups gobbled up their food together, wagging their tails in delight.

“Giving food to the little kids,” said the videographer.

The video has since made its round on social media, with many Malaysians saying how happy the puppies look after being fed and praising the officer for his kindness, not only during the pandemic but during Ramadan as well.

“You fed them with love. Now they will guard you like an army!” wrote one user.

“Salute! Well done sir. Thank you for showing care and concern to these puppies. They just got to eat since its hard for them to get food now,” wrote another.

While one user also pointed out that it would be better for people to give strays food in a “safer place,” preferably away from roads, as animals tend to return to the same spot in search of food.