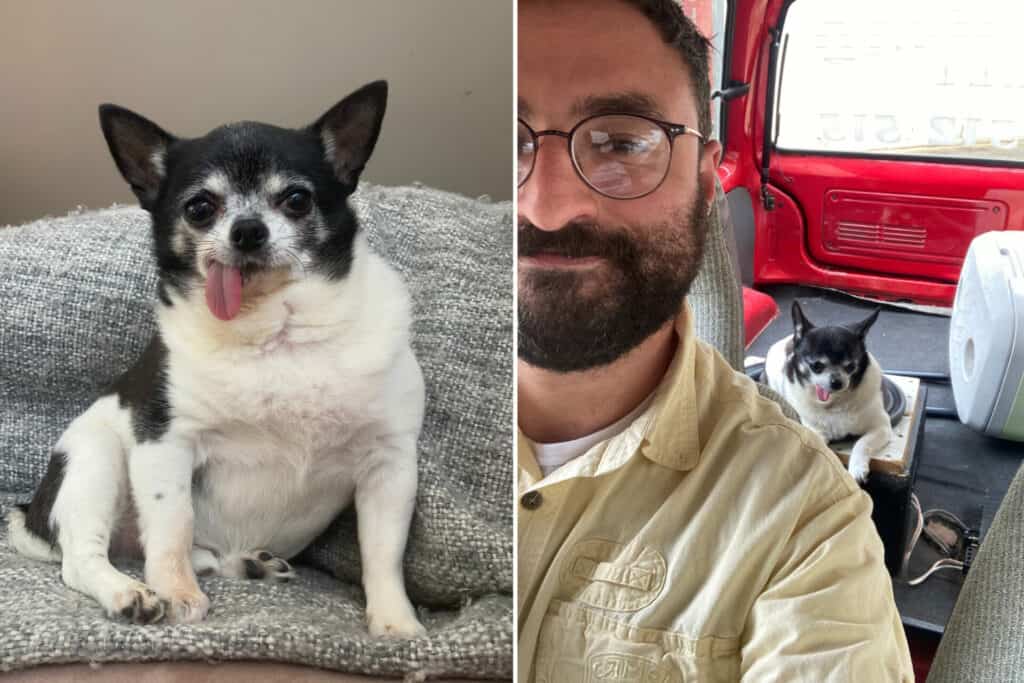 Chihuahua Gets Snuggly on Subwoofer

A dog with a passion for music has delighted the internet this week. After his owner shared a video of him snuggly up on top of a speaker.

Denis Arbatov and Elizabeth Garginian adopted the Applehead Chihuahua Macaroni. Seven years ago and have since discovered his love for a good tune.

Macaroni can be seen curled up on top of a subwoofer in a video shared on Reddit and Instagram.

Alongside the footage, Arbatov wrote: “My chihuahua’s favorite song is ‘Sandstorm’ by Darude. He won’t leave the subwoofer when it plays.”

13-year-old Macaroni, who lives in Australia with his owners. Left, and a picture of Macaroni sitting on top of the subwoofer with owner Denis Arbatov in front, right. The internet is obsessed with this music-loving pup. After a video of him listening to his favorite tune captured viral attention.
Denis Arbatov

“When Macaroni comes with us on an outing. He cradles himself snuggly on the subwoofer for the tunes ahead,” owner Arbatov told Newsweek.

With over 19,000 upvotes, the footage delighted the internet, where viewers rushed to share their comments.

“So that’s why it’s called a subwoofer,” joked one reply. While another wrote: “Cool little dude is just rocking out with his tongue out.”

Named in homage to Macaroni and his canine brother Lenny, the pups frequently appear on the deli’s Instagram page, where they are a huge hit.

But it is Maraconi’s love of music that has gained attention online.

“He’s pretty easygoing and loves an array of music. Never hogs the Spotify and likes it when we curate the playlist, even if it kicks a little harder,” Arbatov said. “Mind you, we’re pretty wary of his age, so we turn down the low frequency just enough for him to enjoy the music and still be comfortable.”

There is evidence that Macaroni isn’t the only dog who reacts to music.

In 2002, psychologist Deborah Wells of Queens University, Belfast, examined the influence of music on our canine friends.

Working with 50 dogs in a rescue shelter, Wells recorded the animal’s reactions when they listened to pop music, classical music, and heavy metal.

While some music didn’t appear to have any impact on dogs, it was revealed that heavy-metal songs often prompted barking and agitation, while classical music had a calming effect.

“When he’s not listening to music, he likes trying to catch flies and eating schmackos but is a couch potato at heart,” said Arbatov.

“I see we have a dog of culture among us,” joked another commenter.

Another Redditor joked: “Bruh, there are like no brain cells in that dog’s head, and I’m fine with that. He loves what he loves.”

Do you have funny and adorable videos or pictures of your Pet you want to share? Send them to life@newsweek.com with details about your best friend, and they could appear in our Pet of the Week lineup.