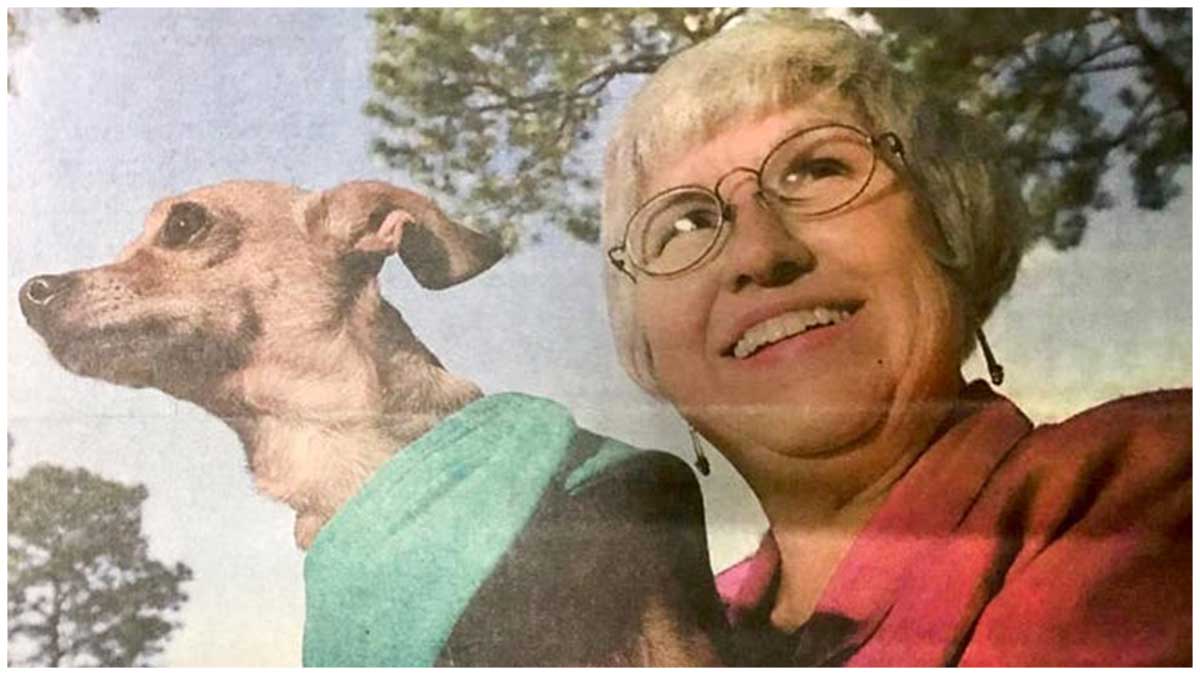 Do You Remember this Unusual Event from 1999?

“Bandita and Sandy Parks made headlines around the world and caught the attention of disc jockeys from as far away as New Zealand when the story of their struggle against a hawk and her cry of, “Drop the Chihuahua,” hit the news wires,” wrote Murchison in the post.

Here is the Original Story of 1999

As a hawk swooped in for the kill, pet owner Sandy Parks screamed, ‘Drop the chihuahua!’

BLUEWATER BAY — The only remnants of Monday’s battle in the front yard of the Bluewater Bay duplex are some flattened shrubs and a busted drainpipe.

Silent is the wildly beating wings of a hungry hawk and the shrill cries of the tiny dog.

But if you listened hard enough Tuesday, you could still make out one fierce shriek ringing out over the cozy, quiet block of Gleneagle Boulevard:

Sandy Parks, artist and dog owner, didn’t know why Bandita froze at the end of her Monday walk.

Annoyed by the idea her 3-year-old Chihuahua was playing “one of her stubborn dog games,” Parks tugged her 5-foot leash and called her name.

In a swoosh, Bandita was airborne, clutched in the talons of a hawk. The bird, later identified by veterinarians as a juvenile red-tailed hawk, had evidently resorted to preying on pets because of a wing injury.

Parks said she didn’t care about the ins and outs of why a hawk was lying-in-wait in her neighbor’s bushes. She had a six-pound Chihuahua to liberate.

First thing that ran through her head in that day of 1999?

“Oh, she’s not getting my dog,” Parks recalled, dipping her head for emphasis.

“She wasn’t letting go and I certainly wasn’t letting go– I thought we were going to have a duel to the death,” she said, standing on her front stoop and waving her arms as she relived her defense of precious Bandita. “Here I am, with this thing on the end of my leash and I didn’t have any tools or anything.”

Usually, her block is abuzz with joggers or walkers, Parks said, but Monday morning it was just the three of them.

Parks did what any other 61-year-old grandmother would do when her beloved pet faced becoming a meal for a hawk with 2-inch talons and a 5-foot wingspan: She beat the bird into submission.

First, she tried yanking the cord around and slamming both the bird and the dog into the outside wall of her duplex.

“I figured (the hawk) was on the outside and would smack first,” Parks said. “But I did think I would probably wind up killing them both.”

After a blow to the head, the bird dropped to the ground– its claws still in Bandita– and Parks stomped her foot into its belly. When that didn’t work, the grandmother yanked the leash. All animals attached to it, into the house, started jockeying until the hawk’s legs lined up with the door jam.

A few door slams later and a wounded Bandita was free, scampering off to the safety of a closet.

After rigging the door so the red tail couldn’t escape, Parks collected her pooch and promptly broke every driving law to get to the veterinarian.

“I didn’t realize I had so much adrenaline,” she said, looking back on the experience, as she surveyed her house decorated with pictures of her pet and stuffed-animal Chihuahuas. “I thought I was bigger, stronger, and tougher than it was, you know, Wonder Woman.”

Shortly after Bandita’s scrapes and puncture wounds had been tended, the vet’s door opened and in came the hawk, scooped up by members of the Audubon society and trucked to the same animal doctor.

“So there they are, the bird in a box and the dog in a cage in the same room– (Bandita) wasn’t too thrilled about that,” Parks said. “She didn’t even want to come to the front door. I’ll probably never get her outside again.”

In the meantime, she has more to think about than just a dog with puncture wounds and a dark scrape down one thigh: Battering the hawk — a bird protected by federal migratory laws — is illegal.

“Oh, I got the lecture,” Parks said of her consultation with the vet. “I just wanted to say Listen, put me in jail, fine me, just take care of my dog.’ The bird wasn’t afraid of me and once he lost the fear of humans, he could have been dangerous. What if it had been my granddaughter or one of the neighborhood kids out walking the dog?”

For all its trauma, the hawk lost only one feather in Monday’s incident and is expected to make a full recovery from its earlier injuries, the veterinarian at Niceville Animal Hospital said Tuesday.

At 2.6 pounds, the bird tips the scales at half of what a healthy hawk should weigh. The red tail might remain in wildlife rehab for up to six weeks before being released.

“I know now she was starving and just trying to survive, but I just wanted my dog,” Parks said. “She is the only other person in this house.”