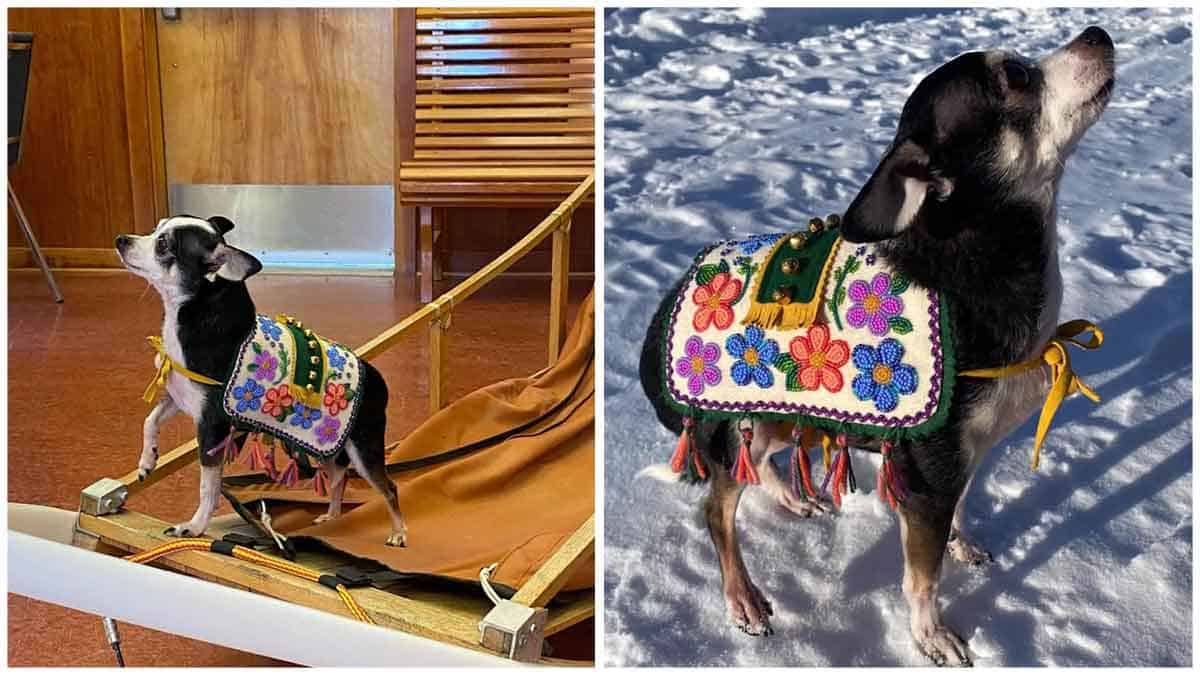 An artist revives blankets tradition with beaded bling for her 7-year-old Chihuahua.

A Chihuahua may not be the first choice as a sled dog. But, seven-year-old Rikki looks ever proud sporting a new beaded dog blanket.

The blanket was handmade by his owner Velma Olsen. She is a Northern Tutchone and a member of the First Nation of Na-Cho Nyak Dun in Yukon.

“It’s just so much fun creating clothes for this little guy,” she said.

“He was very proud to put it on. He actually pranced around, and was very happy to have it on.”

Olsen spent a month working on Rikki’s blanket and made it specifically to enter him in a pet parade contest organized by the Yukon Rendezvous festival happening this month in Whitehorse.

“I look for any little way to inject a little bit of culture into things,” she said.

Dog blankets are embellished fabric that drapes over a sled dog’s back. This is a longstanding tradition among First Nations across the Yukon and Northwest Territories. The blankets are designed with embroidery, ribbons, tufting, bells, and now beadwork.

“They were a symbol of respect for the dog,” said Nyla Klugie-Migwans, a member of the Selkirk First Nation and the Tlicho Nation.

“A long time ago, the dogs that we had were working dogs. Mushers or families would use dogs to get from one community to the next. And, they would travel long distances to visit family or pick up supplies.”

Reviving the tradition of dog blankets

Both Olsen and Klugie-Migwans were among 10 Whitehorse-based artists who contributed to the Kwanlin Dün Cultural Centre. They did so by sewing the group’s traditional First Nations dog blanket project in 2017.

“Our generation wants to learn as much as we can about those items’. This includes connection to the land, animals, and people,” said Klugie-Migwans.

“Things have changed over the years and the next generation is trying to revive all those things. You might see them in museums and all the beautiful beadwork that was created in the past.”

The project was co-ordinated by Florence Moses, who put out a call out across the territory to make the dog blankets together as a way to revive First Nations representation at the annual 1,600-kilometre Yukon Quest sled dog race.

“As Indigenous women, when we sew for our families, we always want to make everything as pretty as we can,” said Moses.

Pups, Sleds and Everything Nice

Dogs were no exception. Moses described the blankets as everyday items and a part of life in the North. She recalls stories about the blankets passed down from generation to generation.

“I remember my cousin telling me stories of my grandmother getting dogs ready to go to town because when you live out in the bush and you go to town, it’s a big deal,” said Moses.

“As soon as they saw the dog blankets coming out for them, they knew they were coming to town and the dogs would get excited.”

The blankets from the project are now a part of the Yukon Permanent Art Collection, but some of the artists involved continued making more.

Moses said she was happy to see the resurgence of the blankets.

“I think it’s very cool and very forward. If we can bring more people loving and supporting Indigenous arts and Indigenous women as artists because of what they’re doing with their modern-day beading, tufting or quillwork; if a person has the creativity to make a traditional item more contemporary so it’s appealing to the people of today, that’s perfect,”