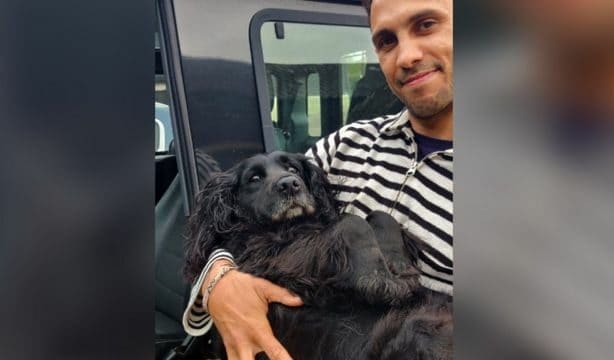 A dog that ran off from its owner was found more than three days later, having fallen into a storm drain.

Ebb, a 10-year-old cocker spaniel, disappeared into hedges near Sudbury, in Suffolk, on Saturday 30 April. Despite searching and calling the dog every day, there was no sight or sound of the much-loved pet.

Michael Cromwell rescued the family pet after he found her chest in water on Tuesday, 3 May. The family is “really relieved”, he said.

“My father-in-law had taken his dog [Ebb] out for its early walk and she ran off. She was probably chasing something,” Mr. Cromwell said.

“We weren’t too worried at first as she knows the area really well. And, it’s always been very safe.”

However, when she failed to return several hours later, the family became more concerned she had not heeded their calls.

They put posts on local social media pages and neighbors who knew Ebb well rallied around to help search. But, there was no sign of the dog.

The Quest to Find the Dog

“My father-in-law had just about given up hope by this time. And by Tuesday, I felt the same way,” Mr. Cromwell said.

“We thought we’d have one last sweep of the perimeter of the field. Suddenly, my wife started shouting that she had found Ebb.”

The dog was at the bottom of the drain up to her chest in stagnant water. Mr. Cromwell said the drain was about five feet deep.

“She must have sat upright all that time. She couldn’t lie down or she would have drowned,” he said.

Mr. Cromwell managed to pull the shivering pet to safety.

“She couldn’t stand at all and we rushed her to the vet,” he said.

After staying in overnight, the vet confirmed Ebb was just exhausted and she was allowed home. Several days later she was back to her old self. She slept and ate “a lot”, Mr. Cromwell said.

He was unsure why Ebb did not respond to everyone calling her name.

“She never barks very much. I think it just didn’t compute that she should do that to get our attention,” he said.

“She probably heard us and just thought, ‘oh good, they’re coming. But it took days for us to find her.”