Don’t Leave me! Chihuahua Begs and Pulls a Sad Face When his Owner Gets Ready to go to Work

Did u ever see how a Chihuahua begs for his/her wishes?

A pet Chihuahua has come up with an adorable way to tug at his owner’s heartstrings when she gets ready to leave for work.

The tiny puppy, who lives in Littleton, Colorado, pulls a sad face and whines at his female owner every morning to guilt trip her into bringing him to work with her.

Sweet footage, taken on November 9, shows the unnamed Chihuahua sitting on his owner’s bed as she tells him she must go.

Adorable chihuahua’s eyes water when the owner leaves for work 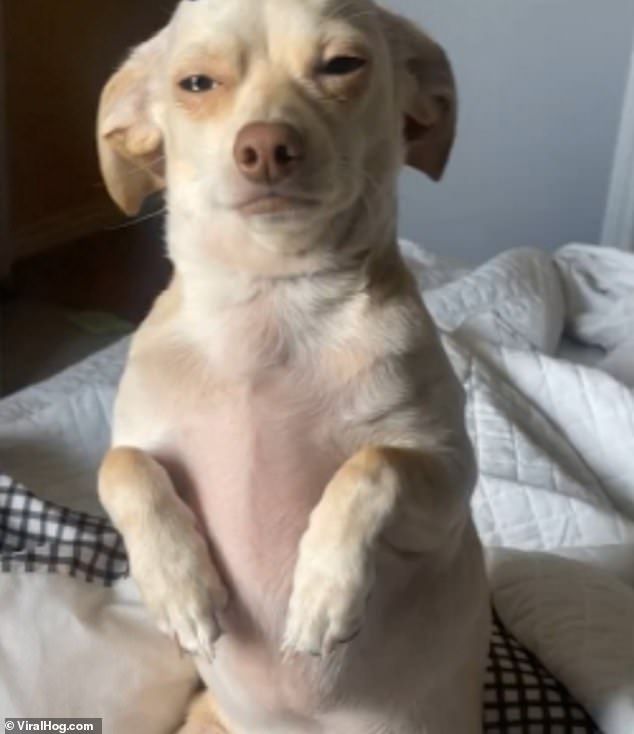 The Chihuahua, who lives in Littleton, Colorado, repeatedly blinks as though holding back tears as his owner gets ready to go for work.

The Chihuahua begs, with his ears pressed down on his head. He starts to tremble and repeatedly blinks as if holding back tears.

His owner, whose name is unknown, says: ‘I have to go to work. I’m sorry, please don’t look at me like that! I love you so much.’

The puppy’s body then looks away from his owner in disdain, as if he knows she will leave him anyway.

The owner continues: ‘I’ll be back, and we’ll go on a long walk, OK? Please stop. It breaks mama’s heart!’

Speaking about the footage, the owner added: ‘I got a new job, and now when I get ready, he knows I’m leaving without him.

‘He does this in different places every morning in hopes I’ll bring him.’

“This Chihuahua begs to stay with him always”

Viewers on social media were captivated by the dog’s sad performance, with one saying: ‘Awwwwww, he’s crying. I would just have to quit my job!!!’

Another said: ‘Now that’s the art of guilt tripping in a nutshell.’

A third said: ‘Oh jeez. I’d have to accidentally allow him to hop in the backseat of my car and take him to work.’

Another said: ‘Oh my god, how cute! I’d call into work for that little sweety!’

Fans of the little dog also compared him to Dobby, the house elf from the Harry Potter movies.

Others suggested leaving on the TV to keep the sad chihuahua company.

Chihuahuas are well-known for their wide-ranging facial expressions and often leave their owners amused with their performances.

Earlier this month, a chihuahua was filmed grimacing while getting his rabies shot because he was terrified of needles.

Footage showed Mon’s face freeze in fear as the vet approached with the needle before he widened his eyes and appeared to snarl.

But chihuahuas are not the only needy dog breed, as a large puppy in Budel, the Netherlands, hilariously demonstrated earlier this year.

Daisy Gijsbers was trying to work from home on January 7 when Indonesian rescue dog Ralphy clambered onto her lap.

The canine then managed to maneuver himself inside her fluffy robe before poking his snout out of her sleeve.

Ms. Gijsbers’ boyfriend, Sjors Rombouts, who filmed the comical scenes, said the Ralphy was known for ‘doing this all the time’ when the couple worked from home.