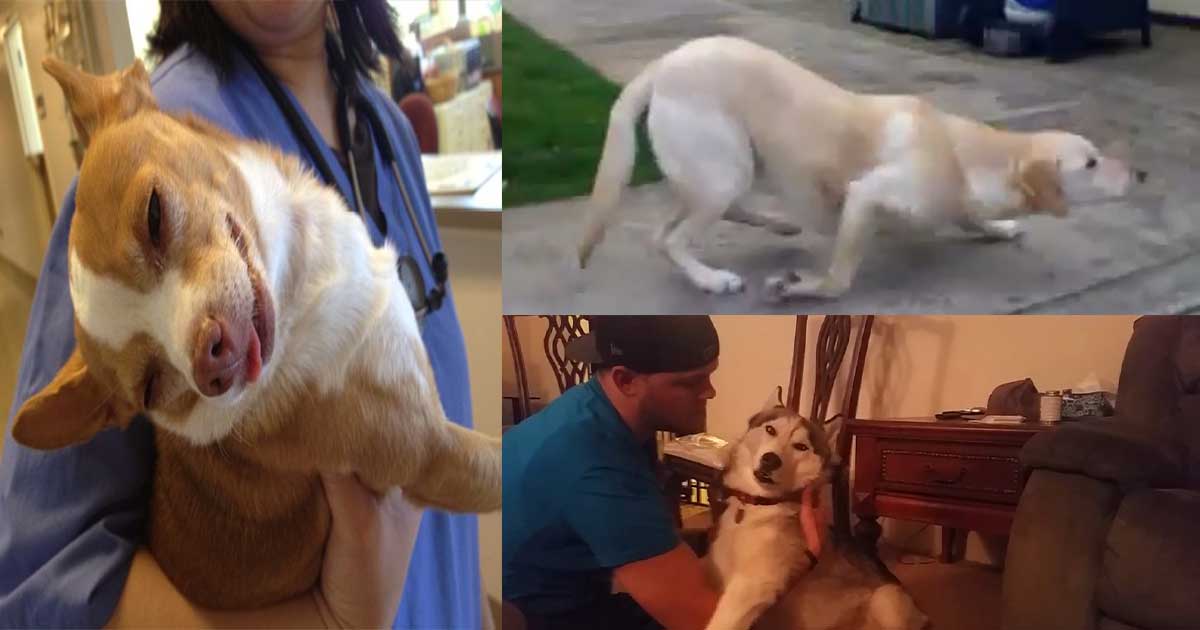 The last ten years have seen a massive spike in dogs getting accidentally stoned. Tom Shell’s dog Stella is one special of them, he came home to find her on a real wild ride.

When Shell walked through the front door, his 13-year-old mini Australian shepherd was lounging on the couch, looking confused as hell. At first, he thought the dog was having a glaucoma flare-up because she was “looking kind of hazy-eyed.” But when Stella slid off the couch and started stumbling in Shell’s direction, unable to walk properly, he knew something was seriously wrong.

Concerned, Shell put her back on the couch. That’s when he noticed that his office door was open, the remains of his torn backpack strewn across the middle of the room.

He realized he’d come home to an absolutely blazed dog — a growing problem as legal weed makes increasingly potent and enticing edibles more accessible across America. Even in states where weed remains illegal for any sort of use, the presence and consumption of the drug is becoming widely accepted.

Did you notice this?

Dr. Tina Wismer, the ASPCA call center’s medical director, says that in the past, the majority of callers were pet owners whose cats and dogs got into “plant material” like discarded roaches or wayward dime bags.

She attributes some of the uptick in cannabis-related cases to the destigmatization in recent years, acknowledging that pet owners may be more willing to call the hotline now that weed is more widely accepted.

Seth’s case something very popular if you not hear, read it below in detail.

Dogs’ appetite for human food is what’s really moving the needle. “Dogs, oh my gosh, especially [with] the chocolate-based edibles, the number of those calls has skyrocketed,” Wismer said during a phone interview.

Now that people in legal states can get edibles delivered to their homes as quickly as a pizza, hiding a stray brownie may hardly be a priority. Ten years ago when it was more frowned upon, people were more stringent about keeping their edibles under lock and key. But when everyone has a stock of sugary THC it doesn’t merit a second thought.

Which brings us back to Shell, who had come home to find his dog totally baked.
Shell, a Los Angeles-based film director, had been working on set when a crew member generously gave him a homemade brownie topped with vanilla icing.

Having spent his 50-some years in a relaxed California culture where weed isn’t a big deal, Shell tossed the edible, safely wrapped in a plastic bag, in his backpack and “forgot about it for a day or two.”

But dogs have a remarkable sense of smell; they have 300 million olfactory receptors to our six million. A plastic bag was no match for Stella, who managed to sniff out the brownie, rip apart Shell’s backpack, and eat the whole thing.

“She had kind of a sheepish look on her face, too, like when she breaks into the trash,” he said. “She ate part of the baggie as well, I think.”

Dogs are particularly sensitive to weed — according to Hemp Industry Daily, they’re up to 10 times as sensitive to THC than humans are. Dr. Ken Pawlowski, a veterinarian based in California, told the Los Angeles Times that “dogs have more cannabinoid receptors than any other animal that we know.”

And while the amount of THC (the psychoactive ingredient in cannabis) in professionally manufactured edibles is strictly regulated in states where they’re sold legally, the potency of homemade treats is a wildcard. In California, edibles can’t contain more than 100mg of THC per package, and 10mg per serving.

Shell panicked: “I didn’t know what kind of [THC] dosage this guy had in there. He said you could eat the whole thing, but for all I knew it was good for two people.”

Symptoms of marijuana ingestion in dogs include ataxia (wobbling or stumbling like they’re drunk), overreacting to sound and movement, urinary incontinence, dilated pupils or glassy eyes, and in severe cases, low blood pressure and low heart rate. If the dog’s blood pressure and heart rate drop to dangerously low levels, it can be fatal.

Once he realized what Stella ate, Shell rushed her to an emergency vet center. Feeling like “the worst father in the world,” he waited as the staff gave her medication to induce vomiting to get rid of the chocolate (which is also toxic to dogs), and then gave her more medication to stop the vomiting process.

Once a dog’s vital signs are stable, there’s little more to do than wait until the dog sobers up. Because there are few clinical studies on cannabis in animals, figuring out how quickly a dog can metabolize weed is a guessing game — though most vets agree that they feel the effects more severely than humans.

Wismer says vets will occasionally treat dogs with a lipid injection to sober them up; since cannabinoids are fat-soluble, they “bind to the compounds and help the dog wake up quicker.” But more often than not, if the dog’s blood pressure is stable, the vet will just send them home and instruct their owners to keep an eye on them.

And so Shell waited. “I brought Stella back home, and she was stoned as can be for the rest of the afternoon,” Shell said. He’s pretty sure the dog was “enjoying the ride” — she spent the night eating snacks and curling up next to him.

“She was very clingy … but in a mellow way,” Shell said. “[Stella] didn’t seem upset. She wanted to be near people, that’s for sure.”

As veterinarians field calls from frantic dog parents, the pet industry is also dipping its toes in cannabis products, albeit non-psychoactive ones. CBD tinctures and CBD-infused treats are gaining popularity as an alternative treatment for pets with severe anxiety and chronic pain, but there’s little research on how dogs metabolize THC, CBD, and other cannabinoids.

(Pet-grade CBD edibles apparently work on humans, according to a valiant SF Gate reporter who ate several handfuls of bone-shaped treats to see if they had the same effects as CBD products for humans.)

Min Lee, brand president at Honest Paws, which infuses its dog treats with CBD oil, wants to see stricter regulations to prevent pet products from being tainted by THC. He worries that cannabis companies aren’t making products specifically for animals, and will “repackage human products” without first consulting veterinarians about the potential side effects.

“Unfortunately, the pet industry is always going to be a little slower to adopt regulations and standards than the human industry only because humans have a voice,” he said during a phone interview.

Wismer says the poison control hotline has even fielded calls from pet owners whose dogs ate a large amount of CBD treats and exhibited the same symptoms seen in dogs who got into edibles.

“No one’s regulating these products — is there actually some amount of THC in them?” she questioned. Or is it that dogs make different metabolites than people do? Is it just dose related?

Unfortunately, no one really knows what the answer is.”

THC in itself isn’t toxic for canines — some pet owners believe that the “entourage effect,” the combination of psychoactive and non-psychoactive compounds found in a non-processed cannabis leaf, can be more effective than just CBD when treating pain.

Wismer adds that chocolate may affect blood pressure and heart rate, putting dogs at more risk of dying. But because of the lack of research in how THC, CBD, and other cannabinoids affect dogs, she’s cautious about endorsing CBD products for pets.

The passage of the Farm Bill in 2018 legalized hemp, which could pave the way for more studies into the drug’s therapeutic effects. But veterinarians still can’t prescribe cannabis to their patients, and Wismer is hesitant to recommend CBD treats to pet owners because the evidence is largely anecdotal.

“The problem is, we don’t know what the right dose is to treat different things,” she said. “Is the dose different for treating pain than treating anxiety?”

If you do want to treat your dog’s pain or anxiety, Lee suggests looking for products that use full spectrum oil and human-grade ingredients.

“Try to identify pet brands that actually work with veterinarians,” Lee explained.
Shell isn’t opposed to the possibility of giving Stella CBD, if there was a need to do so — he even gave his late Shiba Inu, Bonsai, CBD oil toward the end of his life to alleviate his arthritis — but he has been more careful with keeping human-grade edibles out of her reach. He feels lucky that the homemade brownie was a relatively low dose, but worries that she could get into more potent gummies.

“If the dog got into those and ate the whole thing,” Shell said, referring to a tin of high-end weed candies he was recently gifted, “It would have been disastrous. I’ve taken measures to make sure I’ve got triple protection [around weed] but it’s just one of those things where she’s got really good sniffers and I just wasn’t thinking about it.”

Fortunately, Stella made a full recovery and was “ready to rock and roll” by the next day, back to her usual hyper self.

“It wasn’t a terrible experience,” Shell reflected. “Except for the $250 to 300 emergency care bill.”