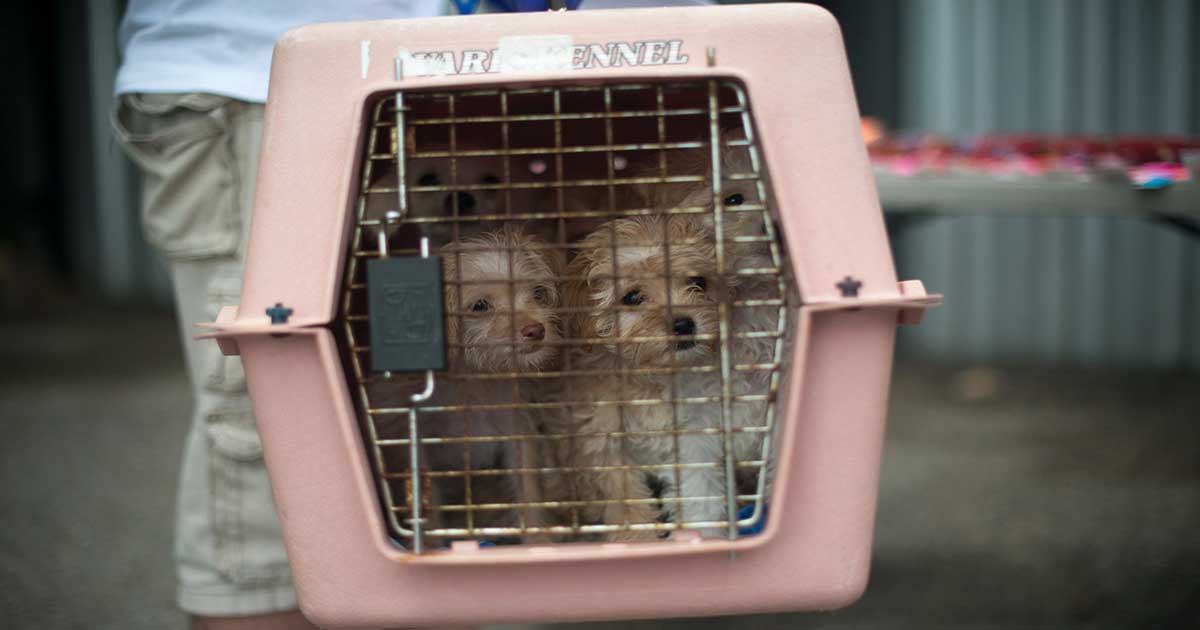 Everyone Wants a Rescue Dog But Not Everyone Can Have One.

You get a maltipoo in here and you’re likely to see a blood bath.

HOUSTON — Jonathan Martinez was standing near an empty cage at the municipal animal shelter here looking dejected. A 25-year-old accountant, he was getting married soon and he and his fiancée wanted to make a dog a part of their new life together. But every time he saw a dog he liked on an online database of lost or abandoned pets, it would be gone by the time he got to the shelter.

Holding up his phone to show screenshots of two adorable terrier mix puppies, Mr. Martinez said, “I saw them when I checked the website this morning but the rescue people took them before the shelter even opened.” A shelter employee apologized and told him the rescue group was shipping the puppies to Colorado for adoption.

“Why are they doing that?” Mr. Martinez said. “I’m right here ready to take a dog home right now.”

Mr. Martinez is bumping up against an issue that is causing some consternation in the animal welfare community. Over the past 15 years, rescue organizations have shipped millions of shelter dogs from poorer communities in the South to wealthier places in the Northeast, Pacific Northwest and Midwest, where stricter spay and neuter laws have resulted in a dwindling supply.

Relocating rescue dogs “can be a lifesaving thing,” said Sandra Newbury, a veterinarian and director of the shelter medicine program at the University of Wisconsin, Madison. After all, overcrowding at shelters puts more animals at risk for euthanasia.

But she worries that things have gotten out of hand. Overzealous rescue organizations and shelters, under pressure to increase their live-release rates, might be harming animals as well as creating barriers to adoption. “Why would you ever put a dog through transport if you could place it in the local community?” Dr. Newbury asked.

The journey can be perilous, especially for puppies and kittens, which are more vulnerable to stress. Some animals have escaped from the vans transporting them and been hit by passing cars. Others have overheated. In May, 26 dogs died from excessive heat in a vehicle owned by the American Society for the Prevention of Cruelty to Animals while being shipped from Mississippi to Wisconsin.

The practice of transporting shelter animals cross-country really took off in 2005 after Hurricane Katrina. The storm displaced thousands of dogs in New Orleans, and rescue organizations mobilized to ship them to homes in other states. This created supply chains and relationships among animal welfare groups, which can range from an individual with a couple of kennels in the back of a minivan to an organization like the A.S.P.C.A., which has a fleet of 12 custom-made vehicles that can each transport up to 40 dogs.

Animals often go out in weekly shipments from say, Houston to Greenwich, Conn., or from Sacramento to Sun Valley, Idaho. Along the most traveled routes, there are hubs or way stations where animals are walked and fed. Outfits like Wings of Rescue and Pilots N Paws provide air transport.

The transporter may have a heart of gold or just be in it for the money. Shelters and rescue groups sometimes pay transporters to take the dogs on the front end, while others may pay to receive them. Adoption fees can top $500, as it is now fashionable to adopt rescue animals. This is in part thanks to the A.S.P.C.A.’s ad campaign pairing heartbreaking images of abandoned and abused animals with Sarah McLachlan singing “Angel.” The ads, which began airing in 2007, generated more than $30 million for the organization. Moreover, at a time when the news is filled with stories of migrant children in cages, many people may see adopting a rescue pet as an easy way to take feel-good action.

As a result, animal rescue has become a “retail operation,” said Greg Damianoff, director of the Bureau of Animal Regulation and Care, Houston’s municipal shelter. Rescue groups have been known to duke it out over the most desirable dogs like shoppers over a marked-down Armani gown. “You get a maltipoo in here and you’re likely to see a blood bath,” he said.

The hot commodities are the smaller, scruffy or fluffy dogs like the puppies Mr. Martinez was after. Shelters bundle loads of these dogs, known as the “cute and cuddlies” or easy-to-flip “flipper puppers,” with larger, older Labrador or pit bull mixes that are harder to move.

Mr. Damianoff sees sending off animals that locals may want as the only way to save the less desirable animals in his inventory. His shelter has a capacity of around 300 dogs and sometimes gets as many as 150 in a day. “We’re not trying to exclude anyone, but the whole thing is to get the animals out of here alive,” Mr. Damianoff said.

But as with many things that start with good intentions, there have been unsettling consequences, chief among them the recent deaths. Even when the animals arrive safely, they can carry parasites like heartworms and deadly diseases like parvovirus and distemper, which then spread not only in the receiving shelters but also to pets in the communities where the rescues are adopted.

Several states, including Maine, Massachusetts, New Hampshire and Rhode Island, have imposed more stringent entry requirements for rescue animals, like mandatory examinations by a local vet and quarantines. But these regulations are easy to circumvent. It’s not uncommon for rescue groups to take animals to neighboring states to make the handoff or to coordinate adoptions online, animal control officials say, making drops in parking lots in the dead of night.

In addition to relocating animals from less well-off areas of the mainland United States, rescue groups have begun bringing in dogs from China, Egypt, Mexico, South Korea, Thailand and Puerto Rico. United States Customs and Border Protection and the Centers for Disease Control and Prevention have raised security and public health concerns about this trend. In May, the C.D.C. suspended all imports of dogs from Egypt after several rescue dogs arrived with rabies.

The stress of transport not only makes animals susceptible to disease but can also contribute to behavioral problems. The dogs have often been abused, neglected or feral before they land in a crowded and cacophonous shelter. And then they get loaded onto a truck or airplane and transported hundreds or thousands of miles to another shelter or foster home before they are eventually adopted. A loving home at the end of the line sometimes isn’t enough to make up for all that trauma.

“As the years have gone by with the transport system, I started seeing so many unsocialized dogs that were aggressive or scared of their own shadows,” said Kelley Bollen, an animal behaviorist in Reno, Nev., who consults with shelters and people who have adopted rescue animals. While some animals are resilient, others are not. “It’s heartbreaking to have to explain to people who have just rescued this dog from the South that this animal won’t be a normal pet,” she said. “I tell them, ‘We’re going to work really hard to get this animal comfortable in your house with your family, but it’s going to be a rough road that’s going to take patience, drugs and a lot of understanding.’”

All this has led many animal welfare advocates to question the wisdom of “humane relocation” and whether all the money that goes toward marketing, bundling and ferrying animals might be better spent stemming the flow of dogs into shelters in poor communities. Since up to 80 percent of dogs that end up in shelters are surrendered by their owners or turned in as strays, there has been a growing movement to address what’s preventing people from caring for their pets.

One example is the nonprofit group Emancipet in Austin, Tex., which focuses on providing free or low-cost spaying and neutering and veterinary services. The group also goes door-to-door to answer people’s pet-related questions.

“Ninety-nine percent of people have pets because they love them and will do right by them if given education and the opportunity,” said Myles Chadwick, the group’s vice president of consulting and training. Emancipet treats some 100,000 animals per year and has contributed to a significant decline in Austin’s shelter population.

The influential pet charity Maddie’s Fund has recently invested millions in similar programs. It is also working to reduce barriers to adoption, at a time when many rescue groups require something comparable to an F.B.I. background check and spot home inspections. Mr. Martinez said he was put off by the intrusiveness of the several-page application required by a local rescue group. “I was like, ‘What is this? We’re trying to give a dog a home,’” he said.

Mary Ippoliti-Smith, who serves on the executive leadership team at Maddie’s Fund, said, “There are lots of people in our movement making huge value judgments about where animals should go and who should get what, who think poor people or homeless people shouldn’t have animals, or families with children or people who work all day shouldn’t have animals.” That’s not fair to the dogs or the people who want to give them a home. “We love animals because of the unconditional love they give back,” she added. “Why deny that to anyone? Why would we assume someone’s ability to love an animal would be any less than our own?”