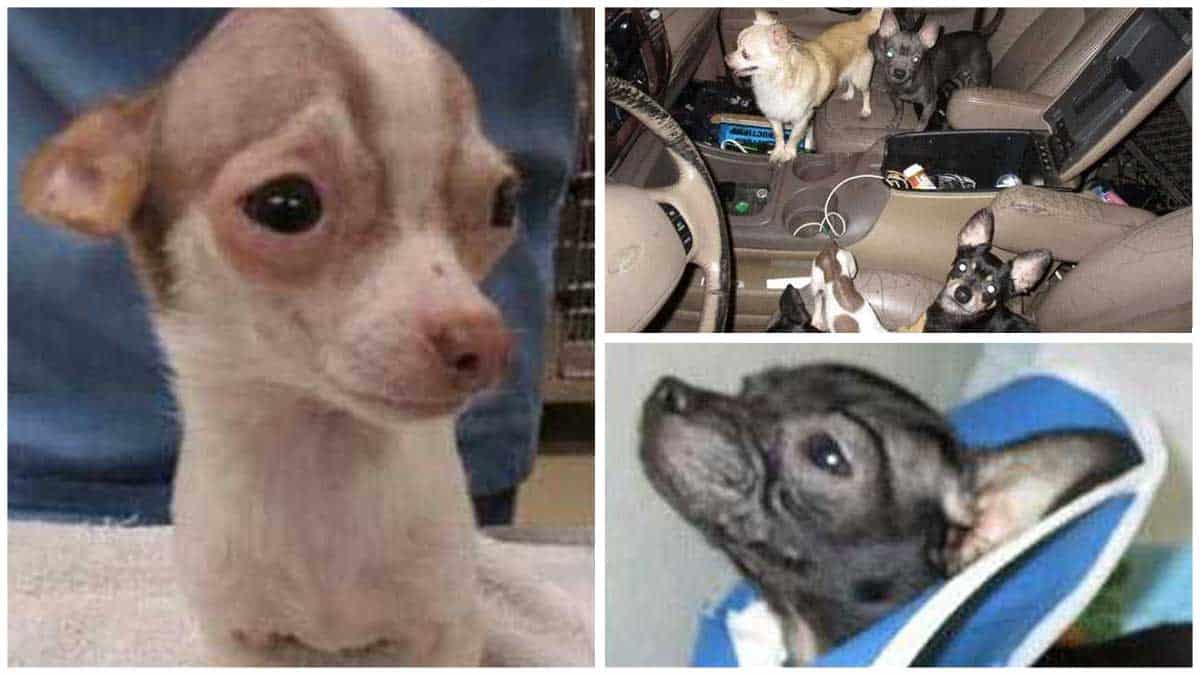 Ex-Owner of 33 Abused Chihuahuas Said They Were Happy

The dogs’ former owner, Javier Enrique Peralta, 41, of Wheaton, Maryland, strongly disputed the cruelty allegations after the dogs were rescued. But, the 33 abused Chihuahuas would say otherwise.

When the animal control investigator first got the call, he didn’t believe it.

“What you’re saying is just not computing,” Jack Breckenridge replied.

What he’d been told, Breckenridge recalled Tuesday, was that 33 abused Chihuahuas had just been pulled from an SUV where they seemed to have been living for days. The Ford Expedition was parked outside an apartment building in Montgomery County, Maryland.

The conversation – last fall – started a lengthy investigation that has the dogs’ former owner facing a July trial on 33 counts of animal cruelty.

“No reasonable person could think that this was okay,” Breckenridge said Tuesday.

The Story of the 33 Abused Chihuahuas

The police seized all 33 abused Chihuahuas. One had to be euthanized despite eight hours of emergency medical care after it was rescued. A necropsy of the 4-month-old puppy showed its stomach full of uncooked rice, plant material, and tin foil, evidence of “foraging behavior consistent with an animal that is ingesting anything it can find,” according to an affidavit Breckenridge submitted in Montgomery County District Court.

The other 32 dogs were in various states of health, according to court records. Eight appeared to be starving and ten were malnourished. Others were dehydrated or had overgrown nails. Three were pregnant. Breckenridge said all 32 were returned to health and transferred to an out-of-state shelter to be adopted.

He said he had raised the brood over the past 10 years and thought about giving some away, but favored keeping them for himself, his wife, and his five children.

They were properly fed in a sunroom, he said, had the run of a fenced backyard, and were bathed twice a week. “The house never smelled,” Peralta said. “My dogs were happy and free.”

On the September day when police found his dogs, Peralta said he had just been evicted from his home. He was moving the dogs to a new residence, he said and had stopped at a friend’s apartment for dinner. “For them to say cruelty,” he said, “it’s just not true.”

Peralta said his children worry about the dogs, asking him: “Are we getting them back? Are they dead?”

A 911 call alerted the county to 20 dogs unattended in a red vehicle.

Police and animal services officers shined flashlights into the SUV. Most dogs seemed excited by the officers’ arrival. There were “more dogs than they could count,” according to court records.

Peralta came out of an apartment and spoke to officers, court records show. As he did, animal services officer Cara Thomas noticed a male puppy on its side in the front passenger seat. She asked Peralta to open the door, and she picked up the puppy.

The tongue of the dog, later identified as “Chihuahua 2” in court records, hung slightly out of its mouth, according to Breckenridge’s arrest affidavit. Officers saw another puppy – designated “Chihuahua 1” – barely moving on the driver’s side.

“Peralta stated that the two dogs were always like this and that there was nothing wrong with them,” officers at the scene reported.

The former owner said as much on Tuesday in an interview. One dog, in particular, ate but could never gain weight, he said.

Chihuahua 1 and Chihuahua 2 were taken to the Metropolitan Emergency Animal Clinic. Chihuahua 1 was treated for eight hours “and his condition continued to deteriorate,” court records state. After he was euthanized, an exam of its remains showed a body condition score of 2 out of 9, with ribs, lumbar vertebrae, and pelvic bones easy visible, according to police.

Chihuahua 2 arrived at the vet center in slightly better condition, but X-rays showed plastic and metal might be in the dog’s stomach and intestines, consistent with foraging. The dog readily began eating food after being taken for medical attention, police said.

Where are the 33 Abused Chihuahuas Now?

Breckenridge, the investigator, said the condition of the SUV led him to believe the dogs had been staying there for days before they were seized. “The primary housing, for these dogs, was inside the SUV,” he said.

Still, there was an adult female dog – Chihuahua 5 – who seemed fine, according to court records. Another 13 dogs, while suffering from ailments including dehydration, overgrown nails, and scratches – showed no signs of malnourishment or starvation, according to the records.

Breckenridge said, “herd dynamics” likely played a role, with the stronger dogs getting to food before the weaker dogs.

“He was free-feeding too many dogs,” Breckenridge said of Peralta.

But Peralta tells a different story. He gave them happy lives, he said, and they were good support for him.

Years ago, he explained, he fell from a ladder while painting and injured his back, leading to surgery.

He still endures pain, he said.

The Chihuahuas comforted him, gathering in groups on his bed.

What, you might wonder, is this vast and expensive team looking for?…

Autumn is bringing us the vast mega bag–handbags. That a chihuahua would…

An investigation is underway after a woman allegedly threw her boyfriend’s dog…
We use cookies on our website to give you the most relevant experience by remembering your preferences and repeat visits. By clicking “Accept”, you consent to the use of ALL the cookies.
Do not sell my personal information.
Cookie SettingsAccept
Manage consent