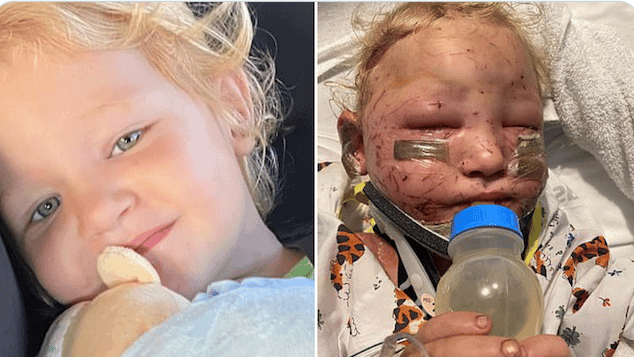 Little Felicity was found unconscious and “possibly missing an eye” on her family’s property earlier in June after being attacked by four 12-week-old pups.

A 2-year-old girl has a long road to recovery after being mauled by a pack attacked of her family’s puppies.

Little Felicity was outside with mom Sierra Michele Peden. Her dad Michael, and her three siblings, Sache, we’re doing a, 13, Daisy, 10, and Daryl, 1, and doing yard work in preparation for a “housewarming party/double birthday bash” earlier in June. Along with the family’s four 12-week-old puppies, according to an update written on GoFundMe.

“We had the puppies for three weeks. And they’d never given us any reason not to allow our children to play with them,” wrote Sierra Michele.

Sierra Michele went inside to shower quickly, leaving her husband with her four kids outside. When she got out, she saw her eldest daughter on the couch with her 1-year-old son and told her to help her dad watch the kids while she and a friend went to the nearest Dollar Tree store in Bakersfield, Calif. About an hour drive from their residence in Onyx – to get presents for the party.

She then called her husband on her way out to tell him she’d be gone for about three hours.

“I told him where the kids were and asked, ‘You have Felicity, right?’ He said, ‘No, I think she followed everyone inside. I don’t see her,” wrote Sierra Michele, adding that she told her friend as they were driving that she had to. “Call Sam because my husband doesn’t have Felicity.”

Her daughter then called her. And though the call was breaking up because of spotty reception, she could make out the words, “Dad…feel… bleeding.. hospital..”

“As we flipped the U-turn, I saw our van racing down the road and my husband waving us to follow. I called him, and he said, ‘I think Felicity’s missing an eye! I found her unconscious, lying under the peach tree! Call 911!’ “Sierra Michele wrote, noting that she had no other information.

“They kept me on the phone the whole way until I got to the hospital, where we concluded that the only thing in the backyard that could have caused that much damage were the puppies,” she continued.

What did Michele say?

In another update posted to GoFundMe. Sierra Michele said the four dogs ate Felicity’s “ear and mutilated her face, neck, and mainly upper body.” Little Felicity was life-flighted to a children’s hospital in Fresno. She underwent three hours of plastic surgery and is “recovering beautifully” but will face numerous operations over time.

Sierra Michele is now hoping her family’s tragic story will spread awareness about the dangers of Littermate Syndrome. A severe behavioral condition in which young dogs bond too tightly can cause fear of people and other dogs. According to West Suburban Humane Society, extreme separation anxiety, issues when encountering new situations when alone, and more.

Additionally, Littermate Syndrome often causes aggression in breeds that are not prone to aggressive behaviors.

The family had learned about Littermate Syndrome after they signed the puppies over to Animal Control, according to GoFundMe.

“Both parents (and every family member) have accepted full responsibility for what happened, and actions have already been taken to eliminate any future occurrences.” Felicity’s grandmother, Linnea, wrote. “They are an incredibly loving and devoted family and always have been.”