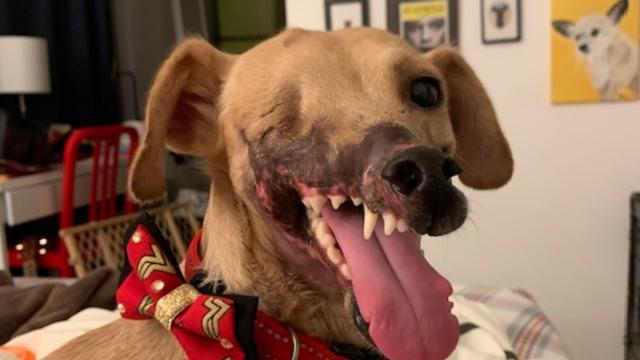 Haddie Lost an Eye and Part of Her Face, But She’s Still Smiling

Despite a rough start as a “bait dog,” she’s a smiley girl. Haddie is not your typical Instagram Chihuahua. She isn’t particularly fluffy. She’s not one of the country’s most popular breeds, and she’s lost an eye and part of her face.

She’s only 2 or 3 years old but has already gone through immense trauma. Mutt Scouts, the organization that rescued her, says she was used as a “bait dog” to train fighting dogs in Mexico.

Poor Haddie sustained nasty injuries to her face, eventually losing much of the skin on the right side of her snout. Surgeons opted to remove her right eye, too. She spent weeks under veterinarians’ intensive care earlier this year.

And yet, after all that, a joyful chihuahua emerged. Haddie loves to run around and play with her new toys and owner Erin Williams, 35, of Los Angeles. The pirate chihuahua was seemingly always smiling and even figured out a way to escape from her crate.

“I think she knows she is living the good life,” Williams says. “… She’s just a total joy.”

Haddie Was Impossible to Ignore

Williams lost her former chihuahua, Elly, in May. She was expecting at least a few more years with the 9-year-old pup before an aggressive brain tumor came along. After Elly’s untimely passing, Williams decided to wait until at least the end of July to look for a new dog.

Browsing shelters and rescues online kept steering her back to Petfinder, the website that shows adoptable pets in your area. There, she kept seeing Haddie.

“This dog so clearly has been through it, but … she just radiates happiness,” Williams says. “You can just see it from her picture.”

But Williams wasn’t looking for a Haddie. She was looking for a dog like Elly, who enjoyed lounging around and had nearly zero interest in treats and toys. But she kept seeing Haddie and would continue checking whether the dog had been adopted. After a couple of days, Williams emailed Mutt Scouts to check and see.

Within days, she completed an interview and led the Mutt Scouts team on a virtual tour of her home. She met their requirements, too: Haddie would be the only dog in the house, and Williams was willing and able to apply medicine to her face.

About a week later—in mid-August—Williams picked up Haddie from her foster home and stopped for a puppuccino on the way back.

“We’ve been a team ever since then,” Williams says.

Williams is hardly a first-time dog owner, but Haddie is so different from Elly that it makes her feel like one. Haddie would play fetch and games all day if she could. She loves running around and looks like a cartoon character clicking their heels when she does.

She expected to coax Haddie out of her shell to get her used to her new life. Nope. If anything, she’s acting like a puppy, the phase of her life she missed while in Mexico.

“She’s getting to enjoy life for the first time, so she gets to be a little bit of a puppy,” Williams says.

Tending to Haddie’s unique needs hasn’t been much trouble either. Men and other dogs understandably make her nervous, so they mostly avoid them, crossing the street on walks if needed.

Williams has had to learn a few tricks, too. Haddie can be surprised if someone approaches her from that side without her right eye. Williams has also perfected the process of applying ointment to Haddie’s face, which is still healing. She quickly uses the medicine and then gives Haddie a treat. That way, Haddie can focus on the tasty morsel and not on rubbing or licking the mixture off.

Even though they’ve only known each other for a month, Williams and Haddie bonded quickly. When Williams was feeling sick recently, Haddie tamped down her usual puppy energy and laid down with Williams for most of the day.

That doesn’t mean she’s still not a little bit of a troublemaker. Williams surfs, and Haddie escaped through a side door in her crate last weekend while Mom was in the water. She even accessed some treats Williams previously thought were out of reach.

Williams documented the little escapade on Haddie’s Instagram page. So far, she has more than 2,400 followers, proof that you don’t have to be a famous Labradoodle or golden retriever to gain fans.

The lost eye does not spoil his smile.

“She always looks like she has a smile,” Williams says. “I find her adorable, and I’m thankful many other people do, too.”