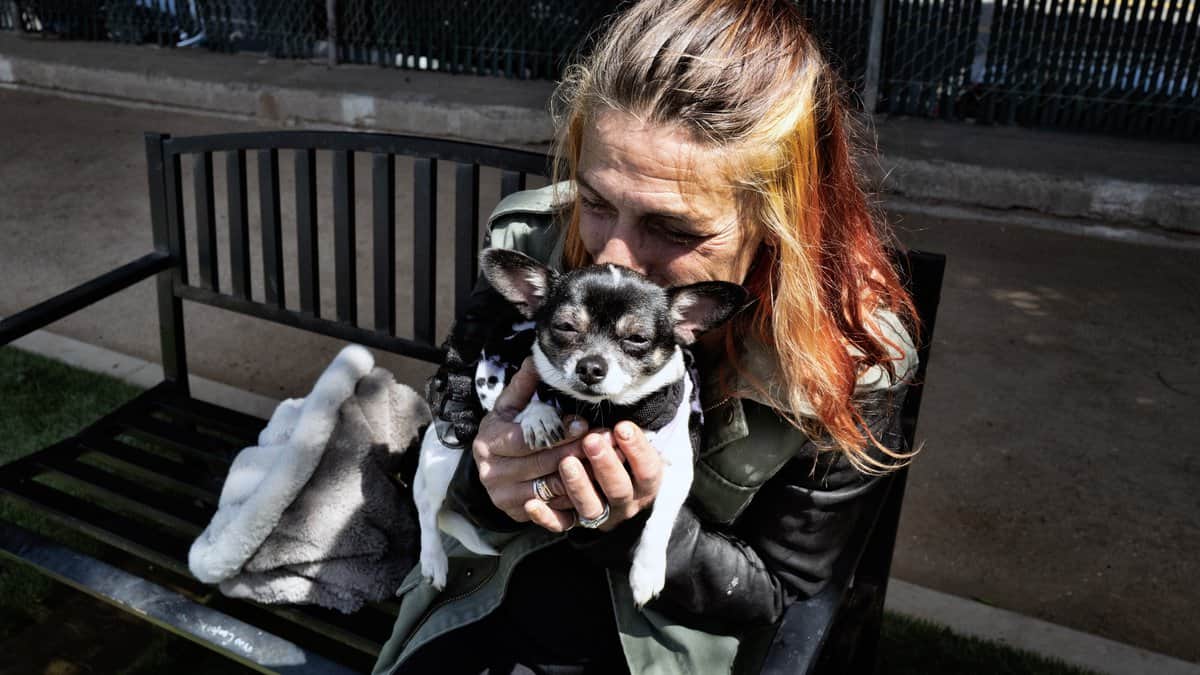 Being homeless in Los Angeles and struggling with addiction is hard enough. But Rachel Niebur couldn’t imagine enduring it without her dog, Petey.

Niebur credits her constant companion, an energetic black and white chihuahua mix, with helping her keep off drugs and giving her a reason to get up in the morning.

“She needs me. She gives me my focus. I have to feed her. I have to walk her. It’s a real relationship,” said Niebur before following Petey to the small. Fenced-in dog park on the grounds of the shelter in the Venice neighborhood where the inseparable pair have lived for about two years.

Traditional homeless shelters have long been off limits to pets, leaving animal owners who want to get off the streets with a difficult choice. But as homelessness surges across the U.S., those working toward a solution increasingly recognize pets’ importance for vulnerable populations. They are looking for ways to keep owners and pets together.

When given a choice between getting shelter or giving up their pet unhoused people will almost always choose to remain on the streets, said Tim Huxford, the associate director of the Venice facility now home to Niebur and Petey.

“We realize that pets are like family to people.”

“So we always want to reduce the number of barriers we have for people in bringing them off the street,” he said. “We realize that pets are like family to people.”

The Venice shelter operated by the nonprofit People Assisting the Homeless, or PATH, was the first of its kind in Los Angeles County to allow residents to bring animal companions, Huxford said.

Thanks to a state grant, PATH has a budget for food, crates, toys, and veterinary services under an initiative called the Pet Assistance and Support program. In 2019, the pilot program provided $5 million to nonprofits and local jurisdictions, and that amount was doubled the following year. Now pending legislation would make the grant program permanent while expanding it across the state.

State Sen. Robert Hertzberg, who wrote the bill that would expand the program, estimates that about 10% of homeless Californians have pets. Many shelters don’t accept animals. Because they don’t have the resources to care for them, said Hertzberg, a dog owner.

He called pets “our comfort” and cited research that found animals provide companionship and a sense of purpose to people who don’t have housing.

The Democrat from Los Angeles said it’s just “raging common sense” to give nonprofits and other caregivers the budgets they need to feed and house pets, especially considering how much California already allocates to address the statewide homelessness crisis.

The money would come from the state’s general fund

“We’re spending a billion dollars to get people off the street. Why can’t we spend a few dollars over there to combine veterinary services, dog food, and crates? These are grants of between $100,000 and $200,000. So, it’s not a ton of money in the grand scheme of things,” Hertzberg said.

Hertzberg said the money would come from the state’s general fund, so it’s not cutting into any existing funding. The measure, SB513, unanimously passed the state Senate in January and now awaits consideration in the Assembly.

The California law is part of a more significant national recognition of the issue.