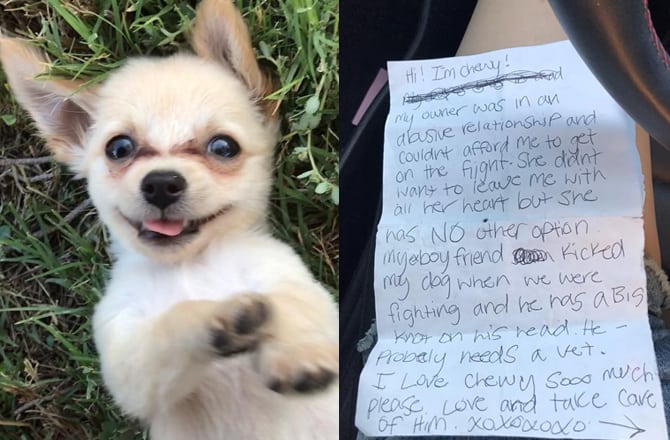 It’s a gut-wrenching decision that pet parents should never have to make—ensuring the safety of a beloved dog or cat by giving him or her up. That is, tragically, the case for many victims of domestic abuse who can no longer take care of their pets due to their harrowing circumstances.

It’s exactly what happened when an unidentified woman left her 3-month-old Chihuahua puppy named Chewy in the bathroom of the McCarran Airport in Las Vegas, Nevada in early July.

Chewy was left with a heartbreaking note that read: “Hi! I’m Chewy! My owner was in an abusive relationship and couldn’t afford me to get on the flight. She didn’t want to leave me with all her heart, but she has no other option. My ex-boyfriend kicked my dog when we were fighting and he has a big knot on his head. He probably needs a vet. I love Chewy so much – please love and take care of him.”

The pup was discovered by a traveler at the airport, who turned Chewy over to the proper authorities. From there, Chewy was taken to local non-profit shelter, Connor & Millie’s Dog Rescue, where he has been since the incident.

Since his arrival, the rescue has been posting on their Facebook page with updates about Chewy and how he’s doing. The tiny dog has sparked plenty of interest, and Connor & Millie’s say they’ve received “thousands” of requests from people who want to make him part of their family.

The rescue also notes that there have been requests from concerned people in hopes of reuniting Chewy with his dog mom. In a post from July 6, the rescue writes, “Chewy is hale and hearty recovered from his injuries and will be available for adoption in 4 weeks if his Mom has not made contact.”

“We will absolutely reunite should she come forward and wants him and is in the position to care for him safely,” the post continues. “Her safety is a major concern and she may not be able to risk coming forward and CMDR asks that you respect her decision as it is hers and hers alone to make.”

Darlene Blair of CMDR tells petMD that Chewy is a happy, healthy puppy. “His owner took very good care of him in spite of her bad situation,” she says. She also tells us that, for the time being, Chewy is in a safe and secure foster home until the adoption vetting process is over.

Chewy’s story has clearly touched a nerve with many, but tragically, the story of him and his mother is all too common. Diane Balkin, a senior staff attorney for the Animal Legal Defense Fund explains to petMD, “Animal cruelty is quite prevalent in the context of domestic violence.”

In fact, according to the Animal Welfare Institute, 49-71 percent of battered women reported that their pets had been threatened, harmed, and or killed by their partners.

In cases of domestic abuse where pets are involved, there are options and resources for those trying to get themselves and their animals into a safe environment. “The best suggestion—time and circumstance permitting— is for them to attempt to plan to flee the abusive situation with their pet.  There are increasing numbers of shelters that will house the victim with their pets,” Balkin says. (The Animal Welfare Institute has information about “safe havens” for domestic abuse victims and their pets in need.)

In Nevada, where Chewy and his mom resided, Balkin explains that animal cruelty is a crime and because the note left with Chewy indicated violence against the puppy, charges could be filed against the abuser. But, “it would require the victim to testify,” says Balkin.

As Chewy’s story continues to gain attention, Balkin hopes that individuals, and society as a whole, will take an even stronger stand against domestic violence. “We need to recognize that domestic violence whether against an adult, a child, an elder, an at-risk person, or an animal has reached epic proportions,” she says. “We need to be observant, be willing to intervene, and to provide resources to the victims. We must break the cycle of domestic violence in order to improve the welfare of humans and animals.”