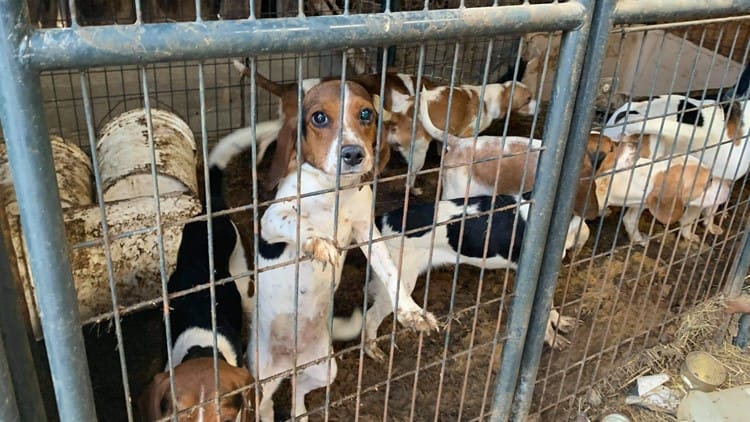 She was a timid thing, a tiny Chihuahua whose swollen belly was packed with five pups waiting to enter the world. Resulting from a puppy mill bust, this sweet baby had gone through it. Cradling this fragile, trembling mom-to-be in my arms, I carried her around the well-lit yet somewhat cramped quarters known as the “back wing” of the Humane Society of Skagit Valley adoption center.

A rare uncovered window positioned at eye level sparked a sudden idea—I’d brighten her day with a glimpse of the outside world. But the pup failed to show excitement. She registered nothing at all. At that moment, I embraced the stark truth: An unwitting rescue from a life of darkness, and unspeakable cruelty, this dog—estimated to be three years old—had no idea what a window was, nor was it likely that she had ever set foot outdoors.

The petite Chihuahua and her two-dozen shelter mates were among hundreds of dogs seized in January from an alleged puppy mill bust. The rest were farmed out to other shelters and foster homes. Malnourished and suffering from an infection, almost all required immediate medical attention. Some didn’t survive.

Like others moved by such news accounts, I broke my streak of avoiding animal shelters’ dismal atmosphere. I put on my big-girl pants and volunteered as a caretaker. I needed to do more, know more, and tell what I learned.

The scope was astounding. Animal care costs for the two counties where the operation was located—Skagit and Snohomish—skyrocketed within a week, reaching tens of thousands of dollars. Already underfunded, overworked shelters found themselves deluged. Legal ownership of most of the dogs remained, with defendants facing multiple counts of felony animal abuse.

Nonetheless, they refused to surrender their “property,” turning the dogs into de facto state wards. They decided to run up tabs with county coffers and nonprofit rescue agencies that would otherwise adopt them out.

The refugees I saw were, I suspect, the cream of the crop—the healthiest and least traumatized of the bunch. They’d been bathed, groomed, and treated to manicures, bringing their nails down to a manageable length. Nonetheless, visible signs of their plight were heartbreaking. Most cowered at the approach of caring humans who wanted only to help them. Some less timid dogs, starved for attention and desperate to be held, charged workers entering their pens. None was socialized correctly.

This is the world of breeding for bucks, an insidious industry in which jaw-dropping sums of money are made through trafficking. They use adult dogs as procreative vessels. They pawn puppies to pet shops and resellers who position themselves as small-time “hobby” breeders. Proprietors of these canine factories operate on the sly, primarily in remote areas hidden from the prying eyes of law enforcement officials.

Doing the Right Thing with the Puppy Mill Bust

Friends’ eyes are a different story. Brandon Hatch never thought he’d turn in his lifelong buddy to child welfare officials. But, after walking in on a gruesome scene, he faces a moral dilemma. Hatch knew his friend was involved in breeding dogs. But what he saw on his last visit tormented him.

One hundred sixty dogs stacked up in cages caked with feces and dripping with urine. The stench was overwhelming, Hatch told me. But, the excrement on a nearby bed left him no choice but to summon authorities.

“I knew there were children sometimes sleeping there,” he said. “In all honesty? It hurt to do what I did. But it was the right thing to do.”

Agents inspected, then promptly called law enforcement. An ensuing puppy mill bust led to searches of three residences in two counties. And the seizure of almost 600 malnourished, diseased dogs with a wide range of medical ailments.

What Hatch uncovered was an unlicensed, primarily unattended, large-scale breeding operation. Emily Diaz, an animal control officer in Skagit County, has seen her share of horror. Most of her cases are smaller in scale and “walk the fence,” as she puts it. This was between behavior in need of adjustment and actionable abuse. I asked Diaz to recount her emotions as she processed the dogs removed from that property.

Her answer was understandable. “What I was feeling, I probably shouldn’t say.” It’s essential not to let emotions overtake your ability to work effectively. But she never disconnects entirely. “The moment I quit caring is when I have to quit my job.”

Don’t look for Diaz to quit her job. She is a warrior working on behalf of the voiceless by attempting to educate rather than impound. She hopes that one tip from a witness or complainant is willing to go on the record as a source so she can build a seizure case when necessary.

Taking a Legal Approach from the Puppy Mill Bust

As news of the raids sparked a groundswell of outrage and protests in the Seattle area and beyond, Washington state legislators were busy revisiting bills left over from an abbreviated 2008 session that would place stricter controls on breeding operations and permit inspections by animal welfare officials who have reason to suspect noncompliance.

While it sounds aggressive, Washington’s legislation is dwarfed by a new Virginia law that mandates inspections of licensed kennel operations. It forbids retailers from selling pets acquired from breeders not authorized by the USDA and is subject to that agency’s basic standards of care.

Washington State Sen. Jeanne Kohl-Welles, sponsor of Senate Bill 5651, would love to see even stronger legislation passed. But in an economic downturn, few have the appetite to force rural, fiscally struggling counties to perform scheduled inspections. At a minimum, this bill will put breeders on notice: Cross the line into greed-induced, abusive practices and you will be held to account. (At press time, the Senate’s version had passed, but not unanimously.)

Opponents in the legislature worry about over-regulating responsible breeders and kennel owners, one of whom testified before a Senate committee that unannounced inspections were tantamount to violating her constitutional rights. Supporters rejected that contention, citing existing laws subjecting food establishments to mandatory, random checks. Kohl-Welles emphasizes the consumer-protection aspect of her bill.

By Sydney Cicourel’s measure, the sum is $800. That represents a one-day spay and dental surgery for a five-year-old Papillon named Butter, whom she adopted after authorities seized 111 dogs from an Eastern Washington operation in February.

Cicourel, a lifelong animal lover involved in pet-shop protests and dog rescues, knew the expenses of bringing Butter home would be enormous. Her beloved three-year-old Maltese/Poodle mix, Polly, came from a puppy mill, though that fact only surfaced after she’d spent $4,000 in veterinary bills and discovered that another $3,000 would be necessary to correct orthopedic problems in Polly’s hind legs. As Cicourel has learned, very few survivors of puppy mill environments escape genetic defects.

It’s a hard pill to swallow, considering that operators of these warehouses can take in a staggering amount of revenue. Prosecutors in the Skagit County case allege that its ringleader has netted several million dollars over the last decade.

Like many of those who purchase dogs through newspaper or Internet ads, Cicourel was duped by a seemingly scrupulous breeder. Her goal is to warn off future victims, both human and canine. She urges patience through education.

The Future of the Puppy Mill Bust Case

A degree of understanding even toward perpetrators is encouraged by Officer Diaz. They believe that a few people start with the intent of inflicting devastating harm on animals. They are deprived of feeling pain, misery, and fear.

Cicourel hopes the high-profile stories in Washington and elsewhere fuel support for continued activism that will eventually stop unnecessary suffering. People who buy or adopt animals as pets are searching for well-tempered companions. Though dogs from puppy mills may become these companions through extreme care and socialization, many fall devastatingly short.

My heart sank listening to Cicourel’s passionate tale. In the shelter, I’d cared for a select group of relatively fortunate victims snatched from the confines of mass breeders. But it wasn’t hard to get to the place she hinted at—a world of despair she likened to concentration camps.

“They all have this spiritless persona. They’re like ghosts; they look right through you,”. “They’re empty and broken. It’s one of the most gut-wrenching things I’ve ever seen.”