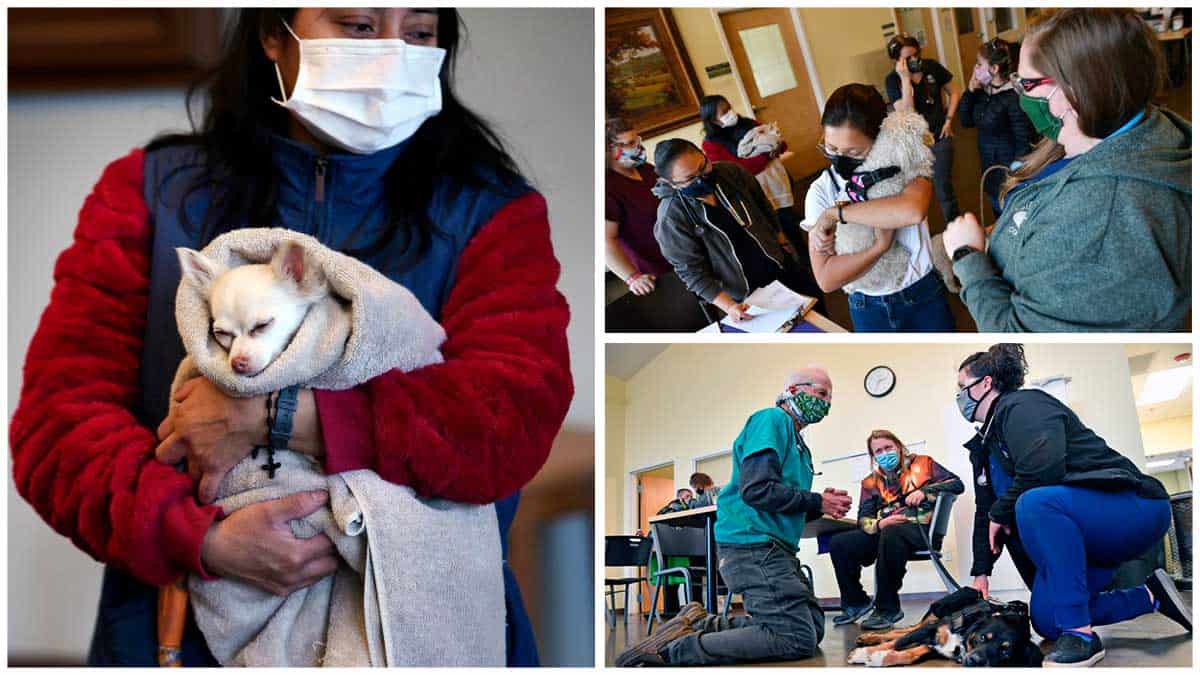 Our spotlight today is on the Street Dog Coalition. The Fort Collins-based charity partners with CSU veterinary and social work students. They aim to provide holistic care to people and their pets.

FORT COLLINS — Nevermind that George Jakovac lost his job because of an injury. Or that he’s crashing at a friend’s apartment because he has nowhere else to live. Or that he suffers from multiple health problems, including fibromyalgia and depression.

“He’s very, very important to me,” Jakovac said. “Seeing him limp around the past few days has been killing me.”

The Charity and its Activities

With no money for a traditional veterinary appointment, Jakovac brought Buster to the Street Dog Coalition’s weekly free veterinary clinic in Fort Collins. There, two students from Colorado State University’s College of Veterinary Medicine examined Buster, squeezing his paw, leg, and spine while telling the dog he was a good boy.

Dr. Jon Geller, a Fort Collins veterinarian, founded The Street Dog Coalition in 2015 and since then the program has expanded to more than 40 cities in the United States. In 2019, Street Dog partnered with Colorado State University’s Inclusive Health Collaborative to add medical and social work students to the weekly clinics to work alongside Geller and the university’s veterinary students. In Fort Collins, Street Dog operates at the Murphy Center, a one-stop-shop for people experiencing homelessness.

At the Dec. 1 clinic, Geller and his staff hauled in more than a dozen plastic bins and within 30 minutes set up a small-scale veterinary clinic with medicines, syringes, gauze and bandages, a microscope, and a scale. Before people and their pets arrived, Geller met with the day’s volunteer students to explain how the clinic works and the expectations of working with people who don’t have homes for themselves and their pets.

They may be living on their own on the streets. It’s them and their pet against the world.”

The students were to keep their ears open for people who mentioned other problems besides a sick dog. If they said they had an illness or were experiencing physical pain, the vet students were to grab a doctor — volunteers from the University of Colorado School of Medicine. If they talked about having nowhere to sleep, call over a social worker, Geller said.

“We are using the pet as the entry point into the conversation,” he said.

For the students, it’s an opportunity to take a lead role in treating an animal and talking about treatment options with concerned owners, Dr. Janelle Scott, a CSU veterinary school faculty member, said. The clinic also challenges students to be creative in finding treatment outside the university’s Veterinary Teaching Hospital where they have access to the state-of-the-art equipment, she said.

“At the Teaching Hospital you have all the bells and whistles,” Scott said. “It helps with thinking outside the box. If I don’t have the best, what can I do to help the patient?”

Maddie Aghamalian, who will graduate from the veterinary school in the spring, said it felt good to figure out what was bothering Buster and, in turn, help Jakovac.

“It’s nice to be able to help people who don’t have a lot,” she said.

Sabrina Martinez and Carol Anziano walked into the clinic with their Chihuahua mix puppy, Daisee, wrapped in a blanket. The women were worried because Daisee ate a hair tie and as far as they knew, it was still in the dog’s digestive system.

“We’ve been calling anywhere and everywhere to see if we can get her in,” Anziano said. “But when we explain our situation they say, ‘Sorry.’”

Martinez was laid off from her job as a cook and Anziano’s Burger King paycheck doesn’t provide enough money for emergency vet visits.

But Geller assured the worried dog moms that Daisee likely would be OK.

“Hair ties can stay there for months,” he said. “I don’t want you to worry about it every day.”

Instead, he told them signs to look for that Daisee’s digestive system was in trouble. And if that happens, he gave them a referral to a clinic that works with The Street Dog Coalition that will accept them.

Along with advice on swallowed hair ties, Daisee received a round of vaccinations. And Martinez and Anziano found peace of mind.

“This whole COVID thing has definitely been a struggle for me,” Martinez, whose job loss triggered a bout with depression, said. “She’s my everything. She’s the reason why I get up.”

How to Help the Street Dog Coalition

As for Jakovac and Buster, the vets concluded the dog tore a ligament in the rear right leg, based on how it felt and Buster’s reaction to pressure. They prescribed a canine version of Aleve for the swelling and pain along with bed rest for Buster. They know the surgery would fix the tear, but a torn knee ligament can cost up to $4,000 and Jakovac cannot afford it. Geller and Scott huddled and discussed options. They agreed to start looking for a surgeon who will perform the operation for a free or a reduced cost or for a donor who will cover the cost through The Street Dog Coalition.

They also gave Buster vaccinations against rabies, distemper, and parvovirus. And the dog left with his first license tag hanging from his color – a fancy one with blinking lights so people can see Buster, who has a black coat, in the dark.

“No matter what I’ll be here for him,” Jakovac said. “I haven’t been able to afford this and being able to get this stuff done is great.”

Then he leaned to kiss Buster’s head and whispered, “It’s needed, huh, buddy.”

To donate to The Street Dog Coalition, visit thestreetdogcoalition.org