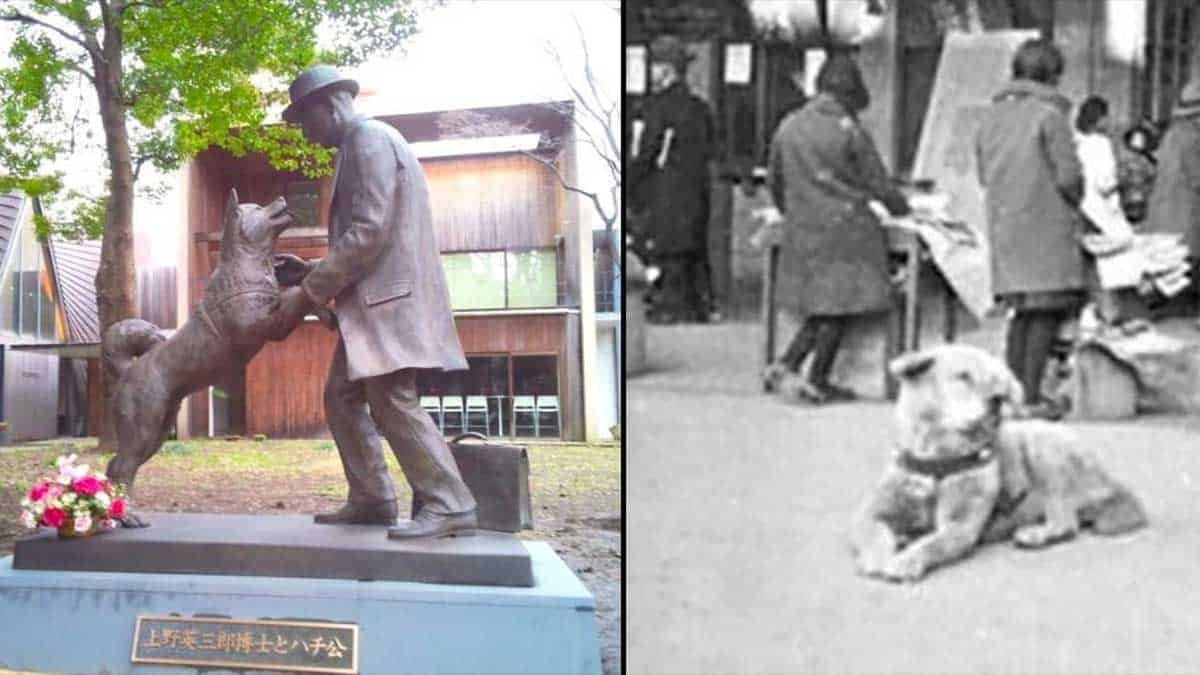 The True Story Of Hachiko, A Loyal Dog That Waited Over 9 Years At The Train Station For His Deceased Owner

Man and his dog – it’s a friendship as old as time. And one of the most well-remembered stories is the story of the Akita named Hachiko, and his owner, Hidesaburo Ueno. In fact, the dog lived over 100 years ago in Tokyo, Japan, yet his presence is still very much integrated into the city.

Perhaps the reason that the story has stood the test of time, is that it’s an example of unconditional love and loyalty.

Hachiko the dog was born on a farm in 1923 and was later adopted by a professor of agriculture at the University of Tokyo – Hidesaburo Ueno.

The two fell into a daily routine where Ueno and Hachi would walk together to the Shibuya train station, where Ueno would pet Hachiko goodbye before getting on the train to work.

Hachi would then spend the day waiting for Ueno to come back. In the meantime, local shopkeepers and station workers would keep an eye on him and often give him treats while he held his vigil for Ueno.

This routine continued for several years until one day, tragedy ensued. Ueno never came home from work as he suffered a brain hemorrhage and died. Of course, Hachi had no idea that this, so the loyal dog continued to wait for his owner’s return. Every day like clockwork, when the train would appear, so would Hachi – searching for Ueno.

Hachi never gave up home and continued to wait for over 9 years, when Hachiko was found on the morning of March 8, 1935 – deceased due to natural causes. His body was taken to the train station’s baggage room – a place that had been one of his favorite hangouts. He was then photographed, surrounded by Ueno’s wife, Yaeko, as well as staff members at the station. Yoshizo Osawa, one of the staff members, gifted the photo to one of his daughters. She recalled that her dad loved dogs and would often tell her about Hachi and how he’d come daily to the station where staff would happily share their lunches with him.

Hachiko’s body was preserved and then kept at the National Science Museum of Japan in Tokyo.

A bronze statue of Hachiko was erected outside the Shibuya Station as a tribute to the dog, however, the statue got destroyed in World War II. A new one replaced it in the same exact spot at the end of the war in 1948, and it remains there to this day. The spot has become a popular and beloved neighborhood park.

The memorial continued in that the station entrance closest to the statue was renamed, “Hachikō-guchi”, or “The Hachikō Entrance/Exit” in Japanese. Furthermore, one of the train lines was also called the Hachiko Line.

And rare photos of Hachi are still being discovered to this day.

In honor of the 80th year of Hachiko’s passing, and the 90th anniversary of Ueno’s death, a bronze statue of Hachiko reuniting with Ueno, was also unveiled on March 8, 2015. The statue was placed outside the University of Tokyo’s agriculture department, where Ueno was a professor.

The story of the loyal Hachiko continues to be remembered and beloved by people everywhere.