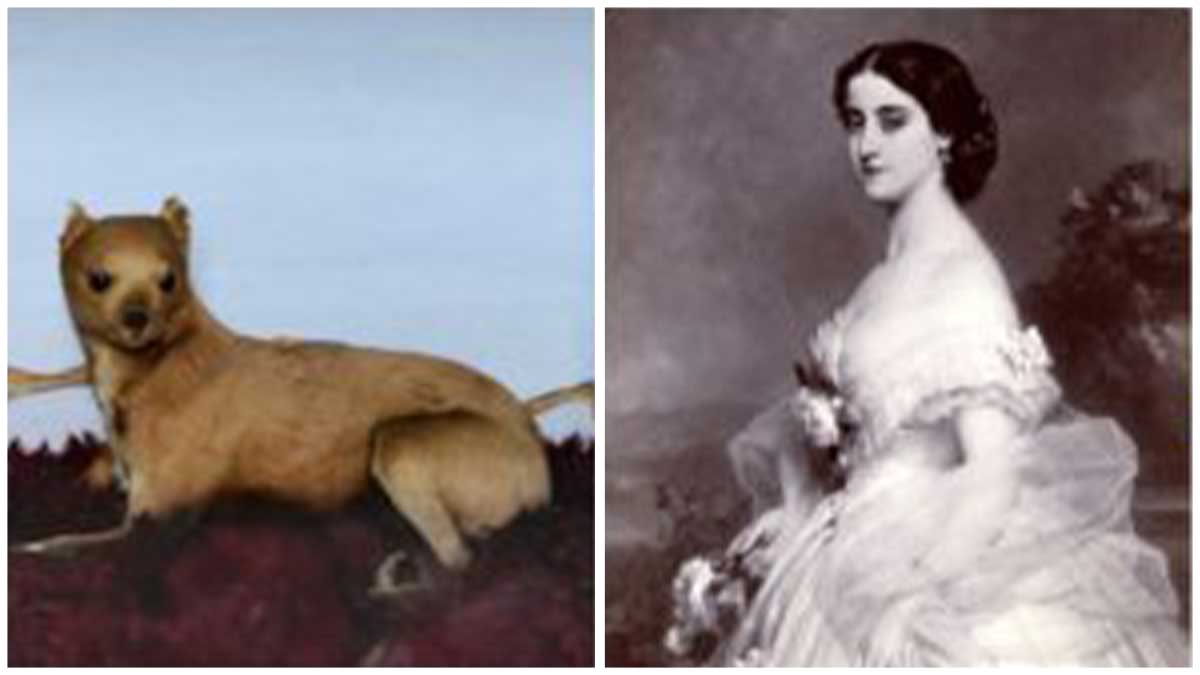 This series by Diana Burgwyn will focus on the relationship between opera’s most iconic stars and their opera dogs. The creation of this series and all research necessary for each piece was conducted solely by Diana.

Adelina Patti, the reigning opera diva of the 19th century, came to Mexico for a tour in 1887, creating so much excitement that some of the gentries pawned their jewelry to pay for the wildly-priced tickets. At her first performance, the nation’s president, Porfirio Díaz, presented Patti with a solid gold crown, ruby and diamond earrings, and a golden locket containing his portrait.

But his best gift was something less expensive and more precious.

On her arrival in Mexico City, Díaz handed Patti a large bouquet of flowers, out of which suddenly popped a tiny Chihuahua puppy, the native breed of his country.  She fell in love with the black and tan dog instantly, named him Bonito, and introduced him to a life of royalty. Everywhere Patti went Bonito was with her, wreathed in silken shawls.

When, during a later American tour, Patti’s beloved Bonito departed this life, she was inconsolable—until, that is, the evening of performance as Lucia in “Lucia di Lammermoor,” one of her most popular operatic roles.

Appearing on stage after the final curtain, they greeted her with much joy. Bouquets of flowers rained down upon her. Its outer case sprang open, revealing a silk pillow upon which reposed another fawn-colored Chihuahua. The delighted audience kept calling Patti back to the stage fondling her new treasure, which she named Ricci.

A Historic Career With Untraditional Tastes

Born in Madrid in 1843, the soprano made her operatic debut at the age of sixteen. She performed in public for an amazing 63 years.

Internationally adored, the raven-haired, black-eyed singer took on the most important coloratura roles including Violetta, Rosina, Lucia, Gilda, Lakmé, Adina, and Marguerite, among others. Her delicate and pure voice of extensive range, produced with amazing accuracy and an impeccable trill, brought international audiences to their feet, begging for encore after encore, which usually ended with “Home, Sweet Home.”

Fellow artists were less taken with the lady, who could be very imperious. She refused to rehearse before a performance, sang only the operas she chose, and demanded that her name appear one-third larger in size than anyone else’s on posters. She claimed that a rival soprano had the “evil eye” and would cause an earthquake, refusing to travel on the same train with her.

Adelina Patti was extremely wealthy. She favored Parisian gowns and precious jewels, in one performance wearing 3,700 diamonds onstage, which today would be worth about $20 million.  “She blazed when she walked,” noted one admirer.  Patti traveled in her private $65,000 railroad car with walls of embossed leather and lavish gold embroidery. And her fees were astronomical, evidently reaching $5,000 per performance.

Parrots, dogs, even monkeys, were not unusual as traveling companions for famous singers. But Patti’s tastes were decidedly untraditional. Rumors flew that she had become deathly ill. Several ticket holders convinced that she had already expired, showed up at the box office demanding a return of their money.

A local reporter did an interview with the clearly breathing lady, who was not at all bothered by the incident. Yes, there had been an entire family of “nice fat little fellows” in her room, for whom she spread bonbons on the carpet. Yes, one ingrate in the mouse family had bitten her. From then on, no more bonbons, she said.

Patti married three times and had no offspring, despite reportedly loving children.  Her first husband, the Marquis de Caux, equerry to Emperor Napoleon III of France, was a fast-living, cynical, and abusive man with an inflated ego, 17 years her senior. During the marriage, Patti became involved with a handsome French tenor, Ernesto Nicolini, which caused much tongue-wagging.

After divorcing the Marquis, Patti married Nicolini in Swansea, South Wales. There, she created a magnificent Neogothic castle called Craig Y Nos (“Rock of the Night”). It had a theater, banquet hall, ballroom, and an ascending/descending floor.

Among Patti’s canines, Ricci was clearly her favorite. As the smallest of the so-called “toy” dogs, Chihuahuas generally weigh from three to six pounds; they are intelligent, full of moxie, and loyal (sometimes to just one person).  It was largely thanks to Patti that the breed came into prominence in the United States.

Chihuahuas are surprisingly hardy, but Patti’s treatment of her dogs was hardly typical.  They treated Ricci not as a dog but as a miniature human being. When his mistress traveled, she designated a separate trunk for Ricci’s belongings. The rigors of such travel would have been difficult for any dog, let alone a tiny creature who probably yearned for nothing more than a peaceful home with a bone to chew on and an outdoor space to roam in.

The director of a Pennsylvania museum that in 1927 showcased various Patti memorabilia, including Ricci’s wardrobe, mused over the meaning of dogs in Adelina Patti’s life.

These Batches of Opera Dogs

“Like most childless women,” he wrote, “Patti had to have some living thing on which to lavish her affections and in this case, it was a dog….I do not know what breed this dog is, but I have heard that his career was not a long one and this is not surprising when we consider the artificial life of such a toy dog.”

Indeed, Ricci became seriously ill in 1892, causing newspaper reporters to sniff around for information on his worsening condition.  One article, in particular, entitled “Sing to him, Nicolini,” appeared all over the United States.

As Ricci came closer to death, reported the newspapers, Patti, her husband,  Nicolini, and a valet were in the parlor of the Windsor Hotel in New York.

“There was a sort of painful expectancy brooding over the scene.  The hairless dog, wrapped in blankets, had been placed near the fire. Chicken and porterhouse steaks had been offered him during the day to tempt his appetite, but he turned from them with a look that plainly showed that he was thinking of things ethereal.”

Patti had exhausted herself singing to Ricci, so she turned to her husband.

“Sing to him, Nicolini,” she begged.  The equally fatigued tenor “lifted his rich voice in song, breaking the stillness of the death chamber.” But Ricci did not respond.

Rather, “the hairless dog cast a reproachful look at his fair owner, glanced at the door, uttered a low cry of pain, shivered and then lay still….for he was a dead dog.”

Patti broke into tears, and Nicolini looked rather guilty—had his singing killed the dog? Adelina Patti was inconsolable that day and “there was nothing but mute grief in her apartments.”

An article in the Los Angeles Times recalled Ricci’s voice and described it in such a way that the reader might well have thought it was referring to Patti herself.

“The deceased possessed a high, well-cultivated soprano voice of light, elastic, and delicately colored timbre.  The deceased sang with the facility and many charming ‘barcarolles’ and was much given to begging for bouquets and applause.”

In a more cynical vein, an operatic fragment was composed called “Patti’s Perished Pup,” which contained recitative and take-off of “Home Sweet Home.”

Nicolini and Patti supposedly had a happy marriage but clearly, something went wrong because Nicolini suddenly removed Patti’s name from his will (she had been the sole beneficiary). Whether that had anything to do with his being required to sing to a dying dog is unknown, but Patti divorced him and soon married a Swedish baron half her age, who, evidently providing the total devotion that she sought, became her sole heir.

Despite the shortness of his life, the adored Ricci would not be forgotten; Patti saw to that by having him embalmed.

Today he can be seen in the collection of the Brecknock Museum (now known as Y Gaer) in Powys, Wales, where he is referred to as Rigi, causing some confusion among Patti fans. Photographs taken of the dog by the museum are not altogether flattering. This is not surprising; after all, Ricci is now well over 200 years of age.  Visitors to that part of Wales often choose to stay at a hotel that was created on the first floor of Patti’s castle, complete with tours and tales of the diva. The hotel welcomes dogs and even offers them dog beds.