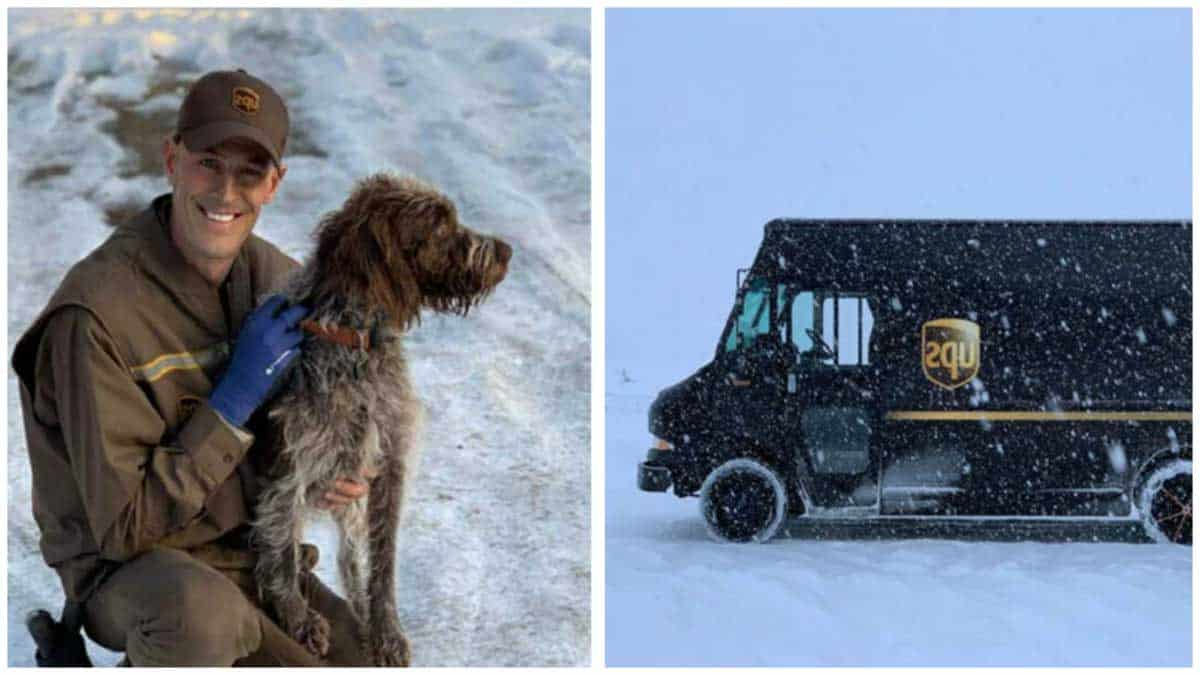 Delivery people and dogs usually are not pairs that get well together with each other. We have seen countless cases where the dogs shout to the mailman because they believe they are trespassers or how chase a FedEx truck down the road. But, this UPS driver proved us all wrong.

But despite that myth mailmen and pets most of the time have a great relationship together, most mail carriers adore the dogs they meet during their job.

One UPS driver truly went beyond and above he even stopped his deliveries to save a poor dog that was drowning in icy cold water.

The UPS Driver and his Story

A UPS driver from Bozeman, Montata called Ryan Arens last December shortly before Christmas he was on the job and made an unforgettable delivery that wasn’t scheduled.

Ryan was driving past an icy pond delivering a package when he heard a dog screaming frantically.

“This dog was screaming and crying and going crazy,” he told the Great Falls Tribune. “I could see the dog trapped about 10-15 feet off of shore, with ice all around it.”

He immediately stopped what he was doing and ran to save the poor animal in need.

When Ryan arrived at the scene he encountered an old man there trying to reach the pooch with a rowboat, then Ryan decided to get into the ice with that boat.

“I slid the boat out onto the ice, using it to distribute my weight,” Ryan said. “I shimmed out to where the ice was thin.”

The kind man crashed through the ice into the terribly cold water and at that point, he decided to swim for the canine instead.

The rescue resulted successfully and just at the right time: “She was starting to go under,” he told the Great Falls Tribune.

“I didn’t think—I just knew what I had to do,” Ryan told PETA. “The veterinarian said that 2 degrees colder and Sadie would have gone into cardiac arrest. The timing was perfect.”

He and the dog went to the row boat’s owner’s home and they both warmed up with a hot shower.

As the story broke Ryan was hailed as a hero. PETA honored him with a Compassionate Action Award for his bravery.

But to Ryan, he wasn’t a hero he simply did what every animal lover would do.

“I personally feel that a majority of my coworkers and people that I surround myself with would have done the same thing I did if the situation presented itself to them,” he wrote on Facebook. “I am glad I did what I did no matter the danger.”

The kind man adores dogs, he himself owns a 15-year-old Malamute and was so happy that he helped a dog in need.

“Animals are my weakness,” he told the Great Falls Tribune. “It was the highlight of my 14-year UPS career.”

He reunited with the dog that he saved that is now named Sadie, he was happy to see that she was safe and doing okay.

“This dog had a whole lot of life left in her, and I’m really glad I was able to act when I did,” Ryan said. “She’s a sweetheart.”

What a true hero indeed.