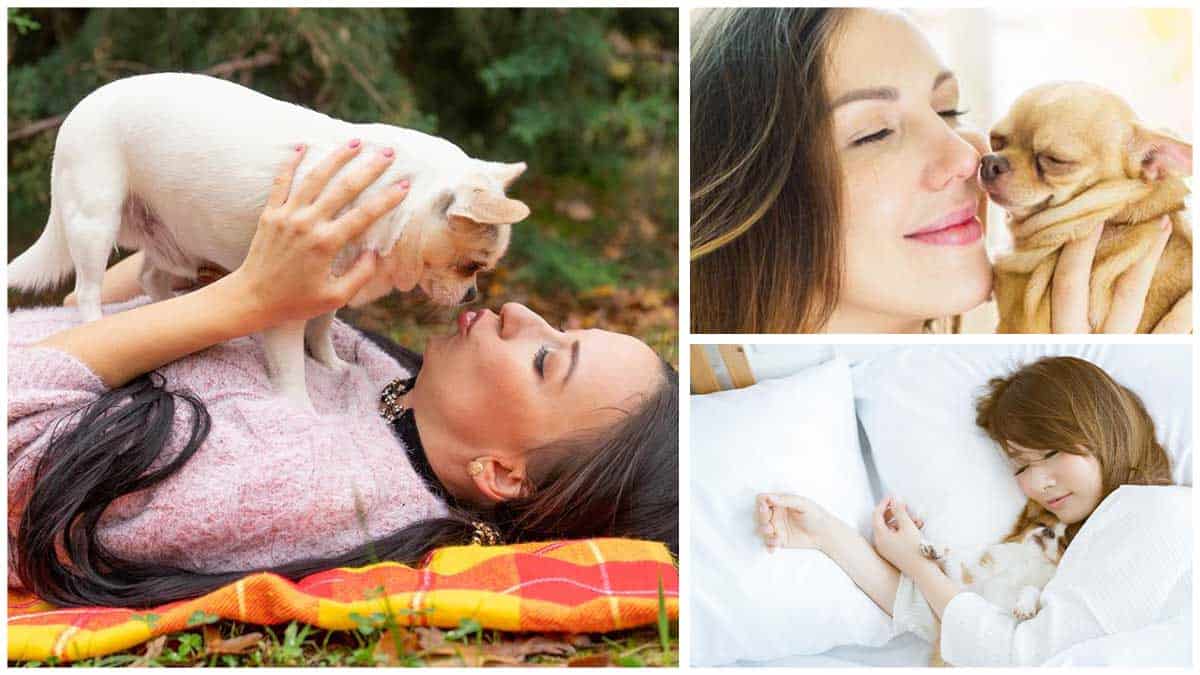 Why Do Chihuahuas Attach to One Person

Chihuahuas are one of the smallest and most popular dog breeds. But, have you ever asked yourself why do Chihuahuas attach to one person?

Chihuahuas are rumored to be descended from the Aztecs and the Toltecs. Other sources claim that dogs similar to Chihuahuas have been featured in European paintings from as early as the 15th century.

Whichever is the case, the Chihuahua has become highly fashionable. In recent years. the tiny dogs are noted for being both loyal and adorable. But, as with other toy breeds, Chihuahuas may become possessive of their owner to a fault. This makes them aggressive or distrustful of other people or dogs.

Why Do Chihuahuas Attach to One Person?

The AKC has recognized Chihuahuas in the United States since 1904. Despite the many variances in size and color, there are only two varieties: the smooth and long-coat. Teacup Chihuahuas are another reason Chihuahuas have become popular and fashionable.

Chihuahuas behave like many other terriers and small dogs. They have high energy, bravery, curiosity, and confidence—sometimes aggressively. It’s not unheard of for a Chihuahua to chase away or intimidate dogs much larger than themselves.

For all their sass, most Chihuahuas enjoy an abundance of lap time. They do not enjoy spending too much time outdoors. Chihuahuas are widely known to gravitate toward one person and reject new people. But, that may be because dogs are more inclined to like those more in sync with their personality.

For example, high-energy dogs are more likely to bond with a high energy person.

Poorly trained and un-socialized toy dogs may be more prone to aggressive behaviors than the breeds often accused of being aggressive, such as Pit Bulls, Rottweilers, and Dobermans. The difference is that Chihuahua bites, while not enjoyable, do less damage than larger dogs. Perhaps that’s why some people dismiss aggressive Chihuahuas as harmless.

Chihuahuas, just like every other breed, require a steady routine and plenty of training in their early development. They do well with consistency and discipline. They can be trained just like any other dog, and in fact, they are much happier and more accepting of other people and pets when trained well.

You can limit your dog’s possessiveness and tendency to cling to one person by starting training early, as early as possible. Even during the puppy stages, you can begin exposing your dog to new people and pets when you have to be cautious around other puppies and public spaces.

Have a friend or family member come to your house with their (fully vaccinated and healthy) pet. The more experiences your dog has early in life, the more likely they will accept new things later in life. Encourage other people to pet your dog, introduce not only other dogs, but children, cats, and other small animals.

Ask your vet and a professional trainer for advice on exposing and introducing people and animals to your dog safely. If your dog is mistrustful of a specific family member (or members), there are plenty of ways you can encourage the bond between them.

For starters, have your dog spend plenty of active time, whether it’s playtime with toys or walks around the block, with the family member your dog dislikes. You can also let your family member feed or give your dog treats. Food is a great motivator for dogs. Just be careful to give your dog the right size and amount of food and treats, since small dogs are more susceptible to obesity.

So, Why Do Chihuahuas Attach to One Person? What Can I Do?

It’s always important to remember that all dogs are enormous responsibilities, not merely fashion accessories. As a pet owner, you’re not only responsible for feeding and housing your pup.

But, you’re also required to put in plenty of effort in training and socializing. Poorly socialized dogs may fear new situations, people, and places. Those kinds of dogs become aggressive toward others and overly protective of their favorite person.

Just because Chihuahuas are cute and fit in your purse doesn’t mean that they don’t need the same kind of attention and effort that all other breeds require. You can’t keep your dog isolated forever, and not exposing them to other things is doing them—and everyone around them—a disservice.

It may be difficult to teach an old dog new tricks, but it isn’t impossible. If you have a Chihuahua who doesn’t like other people or animals, you can help them become more social with the right training, patience, and practice. Every dog can overcome its stereotypes as long as you’re willing to put in the effort.