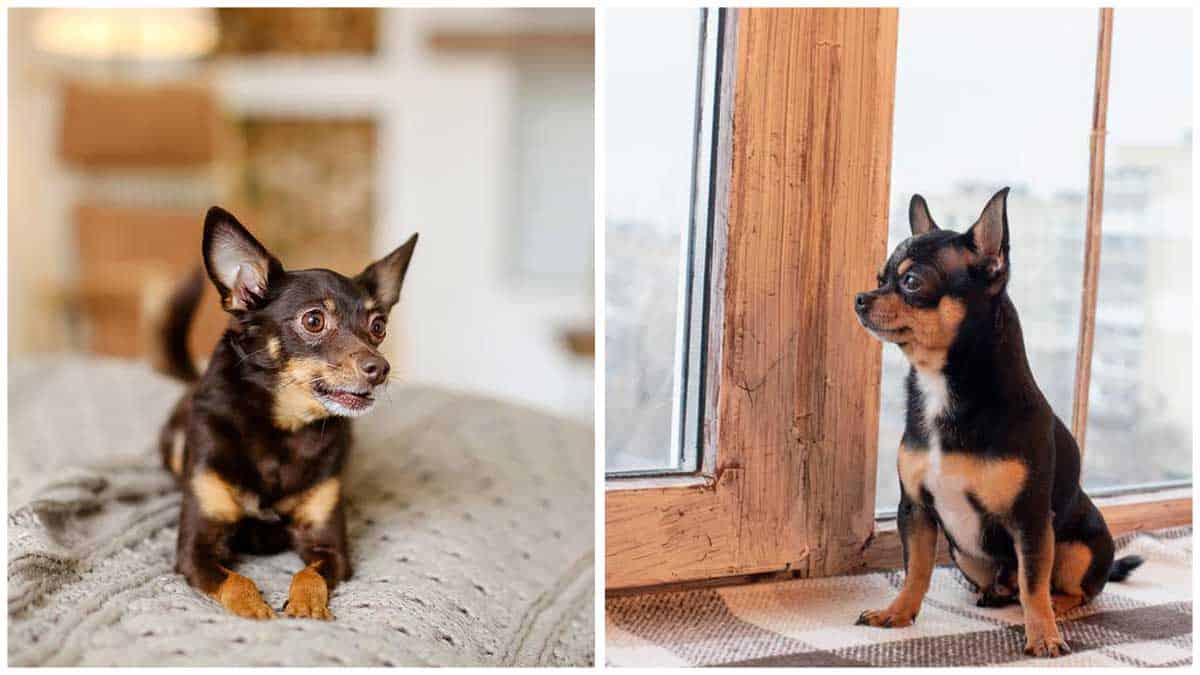 Why Is My Adult Chihuahua Peeing in the House?

If you’ve had an adult dog, you probably asked yourself “why is my adult chihuahua peeing?” at least once.

Dear Bark: Toby is an eight-year-old Corgi/Chihuahua mix we adopted when he was a year old. He was quickly housetrained and never had an accident. About three years ago, we adopted an elderly dog, Coco, who turned out to be completely incontinent. We put down puppy pads and dealt with it. She was a sweet thing, and we knew she wouldn’t be around forever.

A few weeks ago, Coco passed and now, Toby’s peeing in the house. I can’t catch him in the act; he only does it when we aren’t home. He’s not left alone all day, and when we’re home, he’ll ask to go out. Can I retrain a middle-aged dog?

It is very unsettling to suddenly realize that an adult dog seems to have lost the excellent housetraining skills you’ve taken for granted for years. But basically, adult dogs don’t start peeing in the house for no reason.

Though it’s possible he simply needs a refresher course in where to eliminate. But, I suspect something else may be going on here. The first priority is to check for a medical issue, so an appointment with your veterinarian is in order. Sometimes, there’s a physical cause for a dog peeing in the house. A urinary tract infection is just one possibility. A medical problem may make him need to go pee more frequently or with increased urgency. This may be why he can’t hold it as long as usual. And, why there’s no problem if you’re there to let him out. It’s worth keeping track of how often he asks to go out when you’re home to see if he is going more frequently than normal.

Assuming physical reasons can be ruled out, there are other potential causes. As you say, it’s possible he had this issue before, but it was masked by the natural belief that any urine inside was from Coco. It could also be a reaction to the loss of Coco; dogs grieve, too, and he may be missing her. Or separation anxiety may have come into play. For three years, he had Coco for the company when you were gone. Now he’s truly alone in your absence, no matter how short those absences are.

Clearly, Toby needs to relearn to pee outside (and outside only!) rather than inside, but if separation anxiety or physical issues are diagnosed, those need to be treated before he’ll be able to succeed. Then, it’s time to work on the house training aspect. In all cases, I advise the following to make it easier for him to eliminate where you want him to.

How To Housetrain A Dog

Clean thoroughly. How you clean up after an accident is important. What matters most is removing the odor that acts like a neon sign flashing the words “pee here!” Household cleaners may smell fresh and clean to humans, but not to dogs. Many contain ammonia, and ammonia gives off an odor that attracts dogs as if it were urine. Use an enzymatic cleaner designed to chemically neutralize the urine instead. Baking soda or club soda can do this, though not as effectively.

Temporarily give less freedom in the house. Dogs are less likely to eliminate in areas in which they spend time, so keep your dog in just one or two rooms for a while. Spending time in those areas will increase the likelihood that he won’t want to pee in them. But don’t isolate him; choose the rooms that you also spend the most time in. The idea is to make those rooms his home, and that won’t work as well if you’re not there, too. With the scent of the whole family all around, he’s more likely to want to keep that area clean. With success, add rooms to his “home area.” Being on the floor with him will add your scent, which also makes it easier for him to grasp that these areas are out of bounds for elimination.

Go Back To Housetraining 101

While your dog is relearning his housetraining skills, it is important that he be in one of only three situations.

1. Outside with you. If he’s outside, he has the opportunity to eliminate in the proper place. Since you’re with him, you’ll know if he’s actually gone or just sniffed around, watched the birds, or chewed on a toy. If he does go pee, you’re right there to reinforce him with a treat so he learns that he’s done the right thing.

2. Inside under your constant supervision, watching for signs that he needs to go out. Watching a dog every second is a lot of work, but it’s the best way to be alerted to his need to potty. Many dogs circle, sniff, head to the back door, pace, whine, head to an area they have soiled before, seem distracted or refuse a favorite treat or toy when they need to potty.

Since your dog lets you know when he needs to go out when you’re home, this may not be necessary. However, it’s also possible that he’s gone in the house while you were home but you didn’t notice right away and assumed it happened when you were out. I’ve heard this many times from people who didn’t realize their dogs had eliminated inside until they started keeping a closer eye on them.

3. When you can’t watch him, confined to a small space that he’s unlikely to soil. A crate, the laundry room, or a bathroom—any place he’s comfortable—are all options. Many dogs don’t like to be in soiled areas and are less likely to eliminate in a small space, especially if they sleep or rest there regularly. This won’t keep a dog who can’t hold it any longer from going or a dog who is peeing in the house because of stress, but it can encourage many dogs to hold it for a little while. Additionally, if a dog does eliminate in this area, clean-up is at least confined to a spot that is (ideally) easier to clean than other areas of the house.

In the early stages of housetraining a dog, you should not put your dog in any other situation. Once your dog has progressed and is better at peeing only where you want him to, you can consider relaxing these rules.

A final piece of advice: Do not, under any circumstance, punish your dog if he pees inside the house. That can be scary or upsetting to him and can damage both your relationship and the housetraining progress itself.