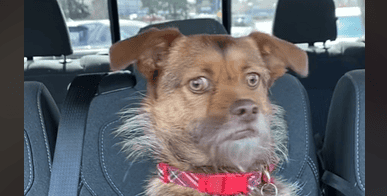 The sweet thing about our pets is that they love us so darn much. And no one is happier to see you when you walk in the door than your dog, especially for pups with separation anxiety. Look at one poor pup on TikTok, who was stressing in the car when his dad took too long at the store. Don’t worry, little guy. Dad will be back soon!

The whole situation was captured and shared in a video on TikTok (@triggeringhappiness). The footage shows the adorably anxious Mr. Pickles sitting on his hind legs, with the most intense look of stress on his face you’ve ever seen. “POV: You’re waiting for your dad, but he is taking too long,” the video’s on-screen text reads. Wait until you see how the pup reacts to a dad taking too long.

Look, despite how worried Mr. Pickles was, admittedly, the video is pretty darn hilarious. “Good luck, Dad’s going to get an ear full,” joked @alycetaylor6. “Now, he said he will be back in a minute. It has been at least 5 minutes now!!! Come on, I am ready to go,” added @gorgeous1954. While a third commenter could relate.“Oh my!! He is so precious. Our dog freaks out when daddy leaves …,” chimed in @orchidtania.

Other people commented on Mr. Pickles’ distinctive facial features. “That dog looks like he orders his whiskey neat,” mused @Thoughtfilledgorilla. “Human dog!!! Looks like he’s ready to yell at some kids for walking on his lawn!” wrote @reereerockschgo. “He looks like he IS the dad,” another commenter, @kellie_henry, joked.

Thankfully for Mr. Pickles, it’s a safe bet that his dad returned shortly after the video was taken. But we’ll always have the memory of his tense, little face. “He was so distraught,” his owner wrote in the caption.

Therefore, don’t be late when you go to the store; someone is waiting for you.