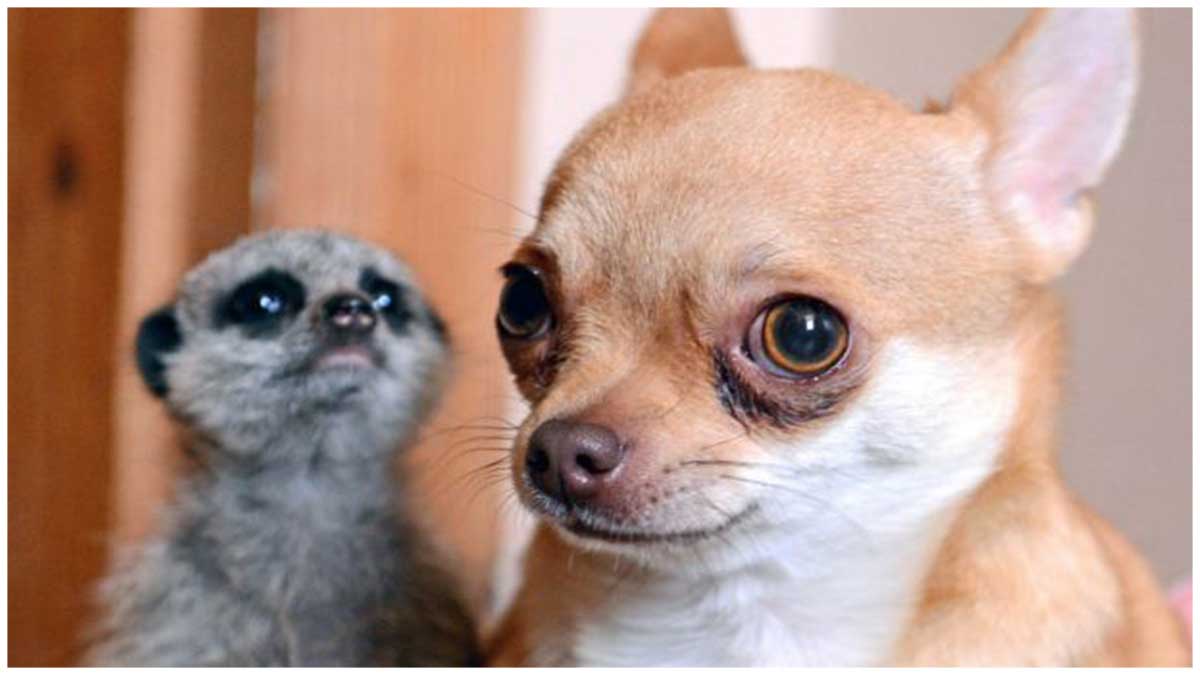 A baby meerkat that was expected to die after being abandoned. But, he is now being reared by an unusual adoptive mother – a pet Chihuahua.

Tiny Wilson was born on January 20. He was immediately shunned by his real mother as the runt of the litter.

Dennis Drew, 30, owner of Mablethorpe Seal and animal Sanctuary, in Lincolnshire had the idea of introducing him to his colleague’s pet Chihuahua Kimi. She was going through a phantom pregnancy at the time. She has reared him as her own ever since.

The Baby Meerkat and Chihuahua Mix

Close: Within days Wilson became bigger and stronger. And, Kimi took over as his mother believing the meerkat was her own puppy

Mr. Drew had the idea after overhearing a staff member talk about Kimi. She was going through a phantom pregnancy at the time.

He introduced the baby meerkat to the dog. She was lactating as part of her phantom pregnancy – and was amazed when the meerkat fed from her.

Within days Wilson became bigger and stronger. And, Kimi took over as his mother believing the meerkat was her own puppy.

After nearly two months together, the pair have forged an inseparable bond. Wilson now follows 18-month-old Kimi around wherever she goes. He also hitches a ride on her back. And, the cute pair are often in a dog basket together.

Mr. Drew said it was an ‘incredible’ moment when Kimi began feeding Wilson.

‘It was touch and go because I only know one other place who has successfully hand-reared meerkats,’ he said.

‘He took to the milk, and within a few days, Kimi had taken over as mother. He started to become bigger and stronger, and now he is doing fantastic. The two are pretty much inseparable now. And, Wilson follows Kimi wherever she goes, and [they] curl up in the basket together.

‘Kimi even gets very protective and will growl if anybody goes near Wilson – I have worked with animals for over five years and I have never seen anything like this before.’

He said the meerkat is on solids now and that he was looking to reintroduce Wilson back to the family who rejected him.

Ms Clark said Wilson had even begun to show signs of acting like a dog. ‘He craves human attention and will sit on the sofa for a stroke and watch TV,’ she said.

‘It’s something you wouldn’t be able to do with any other meerkats at the sanctuary. When the doorbell goes and Kimi barks at the door – he will sit between her legs and do the same.