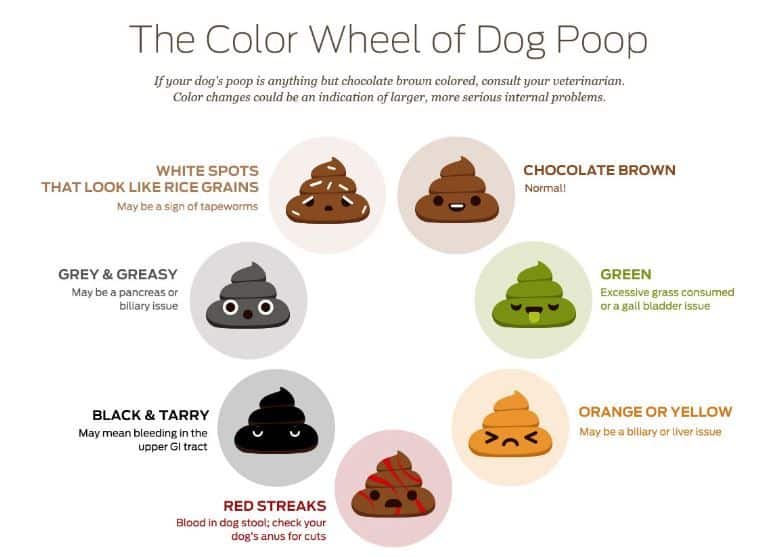 Here’s a fun fact. In the good old days, kings had servants known as the “Groom of the Stool”. Part of the servant’s responsibilities was to monitor the king’s health by observing his bowel movements. Much like the Groom of the Stool, you can also observe the consistency, shape, and color of your dog’s stool to identify potential health issues and concerns.

The following chart provides a quick summary of the different types of dog poop and what each may suggest about your dog’s health.

Yellow or orange dog stools may indicate that the food is passing too quickly through the dog’s entire gastrointestinal tract. The time it takes for food to pass is referred to as the GI transit time.

A quick GI transit time doesn’t give the intestinal tract enough time to reabsorb some of the fluid from the feces. That’s why you often see yellow or orange dog poop appear in the form of diarrhea.

Yellow or orange dog poop could be caused by an infection or irritation in the dog’s intestines, giardia (an intestinal parasite), and the consumption of non-food items.

White dog stools may indicate there’s too much calcium in your dog’s diet. This is more common among dogs that are fed a raw diet (e.g. their meal includes a good mix of grounded bones). While there are certain benefits to feeding your dog a raw diet, too much of it may lead to constipation.

There are two things you can do if your dog is suffering from constipation. One is to pick a raw food meal that has a lower calcium concentration. The other is to integrate food like pumpkin in the dog’s diet. The high fiber content of pumpkins could help soften the stool.

Dog stools with white specks or white polka dots may indicate a more serious health issue. It may indicate the presence of parasites (such as tapeworm) in your dog’s intestinal system. The white specks could be the remains of an adult parasite’s segment.

You should get your dog checked immediately by the vet if you start to notice white specks in the dog stool, especially if the dog shows other concerning symptoms like a change in appetite or vomiting.

Healthy dog poop has a chocolate brown color. Anything darker may suggest the presence of blood in the stool. You would think that the stool would have a red color if it does contain blood but that isn’t always the case. When blood is digested, the iron in the blood gets oxygenated and turns a black, tarry color.

Blood can get into the stool due to a number of reasons. Common causes include the ingestion of blood, internal bleeding, and the development of hemorrhagic disease.

Like black feces, red dog poop would also suggest the presence of blood. The consistency of the poop could provide a hint of where exactly the blood is coming from.

For example, dog stools would a normal consistency and shape, but with a red coating, may indicate there’s some form of bleeding lower down in the intestinal tract.

Red poop in the form of diarrhea, on the other hand, may suggest the bleeding is coming from somewhere higher up in the intestinal tract.

A grey dog stool may indicate a bile duct or pancreatic problem. Poop gets its brown color from a digestive fluid called bile. If the bile duct gets blocked or if the liver gets infected then that may cause the dog poop to have a clay-like color.

Green poop isn’t always a cause for major concern. It could be a result of a dog eating too much grass or leafy greens. Some of the chlorophyll, the green pigment, from the grass will pass through the digestive system and give the feces the green color.

If your dog hasn’t been consuming a lot of grass then the green stool could indicate a more serious problem. It could indicate the presence of a parasite like giardia, the ingestion of harmful chemicals or toxins, or it could indicate that there’s too much fat in your dog’s diet.

Unless your dog is showing other concerning symptoms, you may want to wait another day to see if the dog poop goes back to normal. Otherwise, take your dog to the vet immediately and get him checked up for potential health problems.