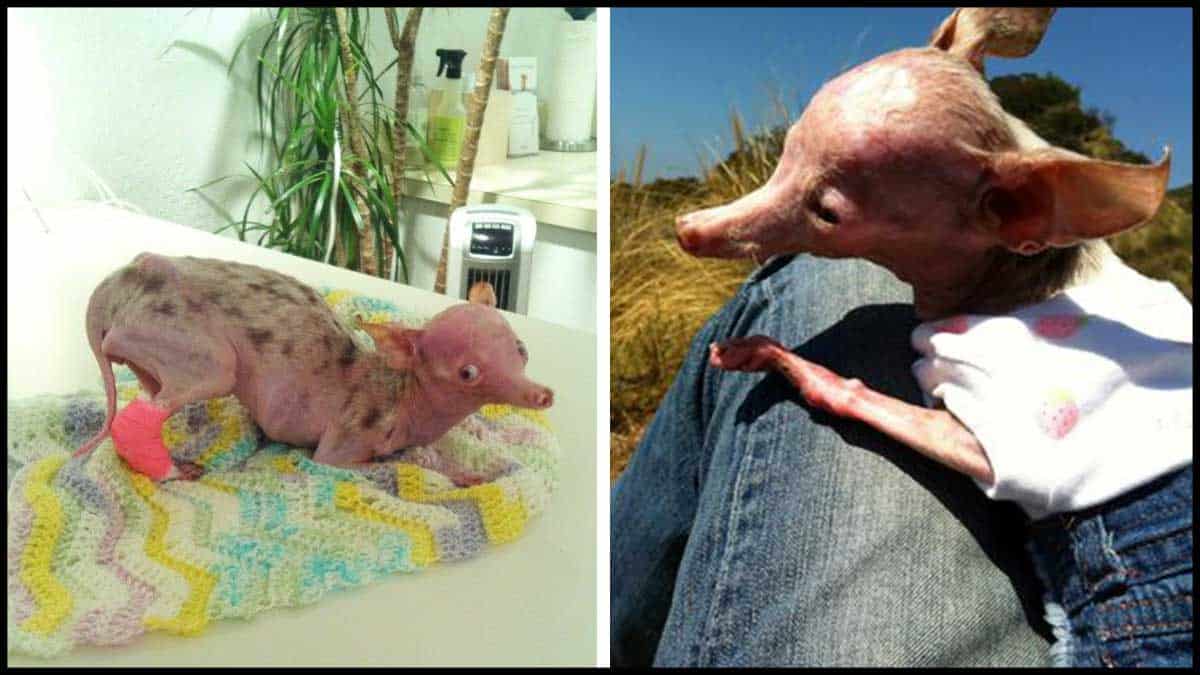 I’m a Survivor: How Rosie the Chihuahua Overcame the Horrors of Backyard Breeding

Last year, when Cinnamon Muhlbauer learned of an abandoned home in which backyard breeding and hoarding had taken place, she went there to see what she could do for the dogs that remained, and what she found was startling. There were dogs all over being inbred and neglected. When she found Rosie, her level of mistreatment (and disfigurement) was hard to absorb:

“She looked like a rat or an anteater. It was hard to figure out. So when you see that at first, it’s hard to comprehend that that’s a dog.”

After a thorough vet exam, Muhlbauer says that in addition to her visible issues, Rosie also suffered from a skin disease. Her teeth were so oversized and crooked that she could not close her mouth. Here are some more of her physical problems:

“To eat she had to scoop food backward into her mouth and roll it back and forth because her tongue was trapped in the back part of her mouth – there was no room for it to stretch out beyond her teeth in that crowded little mouth and there was no way to chew. When she was a few months old, her front leg bones stopped growing and fused where they met to compensate. She learned to walk on the first third of her front legs rather than on her footpads. Her feet are twisted and her toes curve onto one another but it is unclear if they were always like this or if the malformations are caused by the way she scoots them ahead of her as she moves. It is also unclear if her scoliosis was present at birth or developed as she learned to walk. Inadequate nutrition and dirty living conditions brought on a case of Demodex mange that robbed her of most of her fur.”

Initial medical costs ran about $9,000. Despite her congenital deformities, Dr. Lupo, the vet who is treating Rosie says she will “pretty much have a normal life since receiving life-saving treatment.

Rosie’s deformities are congenital as a direct result of backyard breeding, a method in which people carelessly inbreed dogs for profit in their own house to avoid overhead costs. The home in which Rosie lived was also a hoarder’s home and she was believed to have been living under the same coach for two years, never having access to sunlight or fresh air. Even Rosie’s eyes were severely affected because they were not exposed to light so even a normally lit room was painful to her.

Now Rosie is becoming the face of the horrors of backyard breeding and has her own Facebook page and website, Everything Rosie. Since seeing Rosie and hearing her story, many people have been inspired to adopt older dogs and dogs with medical conditions who really need love and support. Rosie’s website has 35 rescue stories and countless donations inspired by Rosie and Muhlbauer.

It’s people like Cinnamon Muhlbauer and pups like Rosie that make you believe in the goodness and caring spirit in our world. Thank God for them both.

Lissa (my long-haired Chihuahua mix) had watery eyes all the time. So,…
%d bloggers like this:
We use cookies to ensure that we give you the best experience on our website. If you continue to use this site we will assume that you are happy with it.I AgreePrivacy policy