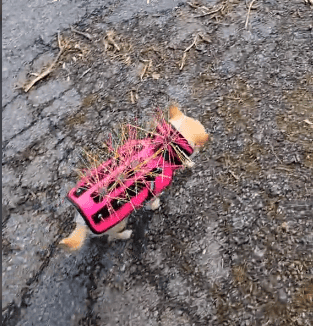 Mom’s Plan to Keep Hawks Away From Her Chihuahua

As Karen showed in the recent footage, she was just a bit nervous about letting her dog go out. Her biggest fear is hawks. So, she needed a plan to keep hawks away from her Chi.

A video on TikTok is the epitome of #LittleDogProblems and dog owners everywhere can probably relate. All @technical_difficulty (or Karen) wanted was to keep her Chihuahua safe while out on walks, but the solution she came up with looks just a tad unusual. Of course, the internet had a LOT to say about it, even going as far as to dub the pup a “hedge-dog” (that’s hedgehog + dog FYI).

People in the comments section couldn’t help but tease the dog mom about her dog’s unique jacket. “He’s opening for Metallica in a half-hour, this is his warm-up walk,” @vulgar_display_of_power_ wrote. “Seagulls took my wife and children back in 2015,” @nath_suth joked. “It’s a hedge-dog,” @tazo_razzel wrote. “Looking real Mad Max right now,” @fosterflailing mused.

While other people thought the spiky jacket was brilliant. “Great idea! I am going to keep it in mind for my small dogs,” @christinaladas235 commented. “Did you just turn your dog into a porcupine? Genius!” @amanda__deschamps agreed. “I love this so much. That baby is gonna be safe from that mean ‘ole bird,” @leeleegirl1985 wrote.

Sadly, precautions like this are sort of necessary. As one commenter, @junosplace, later shared, “After my dog was attacked at a dog event a friend ordered this for me.”

So while it might seem silly, making sure your dog is safe is always a good look.