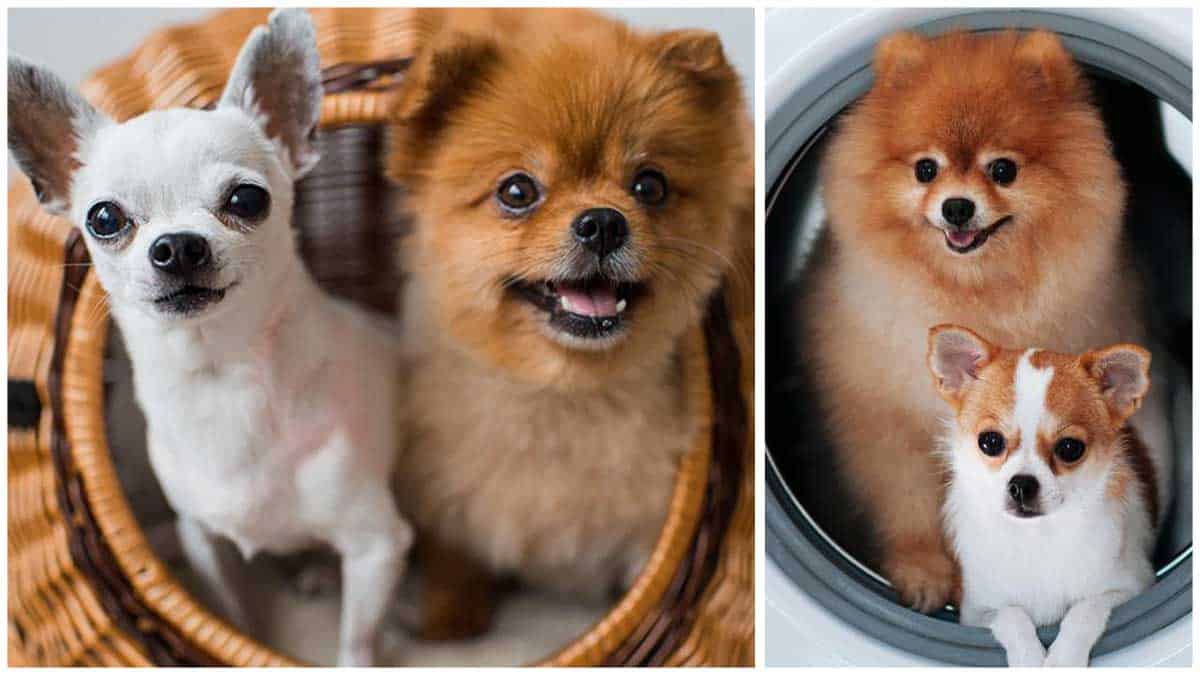 Pomeranian vs. Chihuahua: Which is Better For Families?

When people think about getting a dog, they often wonder, which breed is the best, but there is no such thing as the best dog. What you should be asking is, what breed is the best breed for you? In many cases, the question falls back to pomeranian vs. chihuahua.

The Pomeranian and the Chihuahua are very similar dogs, and it is a very difficult decision to make when deciding which one is better for your family.

They are both very friendly, energetic pups who will provide you with hours of fun, and equally fit perfectly in laps for an afternoon of cuddles. The Pomeranian is a newer breed in America, and as such he is currently a slightly more popular breed, but with that comes a higher price tag. However, the Chihuahua is still popular, and many like his original handbag dog charm.

The Chihuahua tends to live slightly longer, and the Pomeranian is said to be a bit barkier. Though, for the majority of people, this decision solely comes down to their appearance and what they prefer.

So, the most crucial question is, why do you want a dog? Many people with a young family would like a dog to teach their children how to look after an animal.

Sometimes they want a lively puppy who will give their family hours of laughter and fun. Whereas many families would like a guard dog to protect their estate and family. Whatever the reason, there is a dog out there for you!

The Chihuahua and the Pomeranian are very similar pups who find themselves in the toy group. However, in the name of good research, it is essential that you identify the reason why you want a dog to ensure that these dogs are the right ones for you.

Both the Pomeranian and the Chihuahua are part of the toy group. The toy group is recognized for its tiny stature, but they are certainly not small in personality! These guys are suited to apartment life and are popular with city dwellers due to their small size and adaptability.

There are 21 toy dogs to choose from in this group, and many other small dogs in the non-sporting group that are similar to the Pomeranian and the Chihuahua in size and personality.

If you are confident that these guys have the final cut, let us look at them in finer detail.

The Chihuahua and the Pomeranian, despite their small stature, are both medium-energy dogs requiring at least 30 minutes of exercise. These two dogs are amongst the most energetic breeds in the toy group.

It is important to consider this factor because many people who seek toy pups are seeking a lap dog who does not need much exercise and will happily be an all-day-long lap dog, but this is certainly not the case for these two. Two 15-minute walks during the daytime will suffice, and be sure to keep them entertained throughout the day with interactive games or puzzle toys. Despite their small size, they have been known to wreak havoc with their destructive behavior if they become bored.

Overall, both the Pomeranian and the Chihuahua need similar amounts of exercise. Be mindful that they are both little pocket rockets and need more exercise than the average toy dog.

The Pomeranian and the Chihuahua are, again, similar in their trainability in that they are independent and stubborn, so you should not expect the most obedient of pups straight away, if ever. And even once they have learned their commands, they will often have days where they wake up on the wrong side of the crate, and they will simply not listen to their owner. For this reason, they are not well suited to owners who desire consistently obedient dogs.

That said, consistent positive reinforcement training is the best way to train these guys. You must also ensure that you begin their training straight away. The earlier you start your workout, the better your chances are of having a well-behaved pooch.

Overall, both the Pomeranian and the Chihuahua are similar in their trainability. They are both independent and stubborn. So, you must understand that neither of them will be 100% obedient all the time.

Family Interaction Between the Two

The Chihuahua and the Pomeranian are small dogs who, despite their aggressive personality, are more delicate than most people think. Many people say that you should not house these guys with small children as small children can often injure them simply because they are not taught how to handle animals appropriately.

However, if children are taught how to handle them properly and behave around them, this should not be an issue. Both the Pomeranian and Chihuahua enjoy the company of children, so they make great family pets for this reason.

As long as both breeds are socialized early and mixed with dogs of all shapes and sizes, they can get along with other dogs. However, they are both known to bark a lot at other dogs if they are not.

If you are buying either of these breeds as a puppy and already have other household pets, then this early exposure should mean that they will be okay with other pets. As with most things dog-related, it all comes down to early and efficient training.

Overall, as long as young children are taught how to handle these small pups, and the puppies are socialized well with other dogs and pets from a young age, they both make good companions for children and other pets.

The Pomeranian and the Chihuahua have similar temperaments. They are both bold, and not much that they are scared of. Sometimes this can be to their detriment!

They are both sociable, and they love to be the center of attention. They both make equally great companion canines, and they crave human companionship so much that they rarely like to be left alone, and as such, they are both known to suffer from separation anxiety.

Many owners comment that the Pomeranian barks a lot more than the Chihuahua. So, if you live somewhere with noise level restrictions or are not a fan of a noisy pup, then the Chihuahua may be a better option for you. Overall, they both make great companionship dogs and are very sociable creatures that human interaction.

Overall, the Pomeranian and the Chihuahua are healthy dogs who enjoy a long lifespan, but the Chihuahua is slightly more resilient as he tends to live longer.

However, if you have a long-haired Chihuahua, then he is similar to the Pomeranian in that you have to invest more time into grooming him and brushing him several times a week, if not most days. This ensures that any dirt is removed from their coat and that their long hair is kept tangle-free.

Generally, the Pomeranian, with his thick and luxurious locks, will require a bit more tending to than the long-haired Chihuahua, as he has thicker hair.

Neither the Pomeranian nor the Chihuahua is on our list of hypoallergenic dogs, so if any of the family members living in your house has dog allergies, then it is advised that neither of these breeds would suit your family.

They both have double coats, and as such, they shed, particularly during shedding season. If you are seeking a hypoallergenic dog, thoroughly research which dog breed is best for your family.

They will both eat, on average, between ½ and 1 ½ cups of food daily, which is entirely dependent on how big and active they are. Generally, the Pomeranian will eat slightly more than the Chihuahua, but this will not be a significant difference.

The Pomeranian and the Chihuahua puppy price is significantly different. The price of a Pomeranian starts at $1,000, whereas the average cost of a Chihuahua begins from around $500 and up. Undoubtedly, this is because, being a newer breed, the Pomeranian is currently more popular, and the demand is higher.

When it comes to the Pomeranian, they all look the same except for their colorations, so once you have decided on a color that you like, all you have to do is find the pup. However, there are a few more decisions to make regarding the appearance of the Chihuahua.

Firstly, you will have to decide between a long-haired and a short-haired Chihuahua; of course, they both have different grooming needs. Secondly, Chihuahuas also have different-shaped heads. Some Chihuahuas have apple-shaped charges and some have deer-shaped heads, with the other heads comes slightly different health issues.

Overall, there are a few more decisions to make regarding the appearance of a Chihuahua, some of which may have other questions or implications. This is something to research into.

If you still can’t decide!

If you still can’t decide between the Pomeranian and the Chihuahua, then why not combine them both and have the best of both worlds in one dog?

The Pomeranian and chihuahua have become a more popular crossbreed, also known as the Pomchi, is a relatively new designer dog, that generally looks like a Chihuahua but with the Pomeranian’s fluffy and luxurious coat.

Arguably, the Chihuahua and the Pomeranian are so similar that they could be brothers from another mother! Generally, every factor that prospective families may consider is very similar to one another.

Ultimately, it might just come down to their appearance and who you prefer the look of. They are roughly the same size, they are equally as stubborn, they are both great fun and they both get on well with children and other pets.

So, whether it is a fluffball pooch or a slick pup that you are after, know that you are getting a well-loved and popular pup for your whole family.