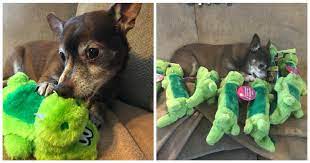 Dogs are funny when it comes to toys. On the one hand, they’re known for tearing up anything they can get their teeth into. But on the other hand, they often attach to one plaything, even something as simple as a cheap squeaky toy or old doll.

You don’t want to lose those toys. Dogs can fixate on a particular one that can be hard to replace if it vanishes. And leaving your dog sad and you scrambling around town like Parker Posey in Best in Show:

That was the case for one dog owner who was shocked to hear her old dog’s favorite toy was discontinued and impossible to find… until the Internet rallied to track it down.

Kelli Brown adopted her rescue chihuahua Jaxon in 2014. After arriving in his new home, a green plush alligator was one of his first pet toys.

For whatever reason, the dog became attached to the toy. Which became known as “Greenie,” and he never parted with it.

“We have tons of toys in the house, but he only has eyes for his Greenie.-Kelli told The Dodo

Dogs play rough with their toys, even their favorite ones, so Greenie should occasionally replace them with an identical model.

But in 2018, when Jaxon was getting old at age 12, the dog tore through one Greenie too many. Kelli went to the pet supply store and discovered that the store no longer had the gator toys. The store had unfortunately discontinued them.

Searching to no avail, Kelli decided to turn to the Internet for leads.

The tweet spread and people wrote in suggesting similar-looking toys… but according to Kelli, Jaxon would accept no substitutes.

But soon, her plea reached just the right person.

A PetSmart team member named Kendyl Kercho reached out, offering to search the store for any remaining Greenies they may have in stock.

“I figured if anyone could help, it was me because I work at PetSmart, where the toy comes from,” Kendyl told The Dodo.

By some miracle, Kendyl could find not just one but several of the green gators hidden away in the clearance section of her store. She got excited.

“I squeaked audibly when I found the clearance toy bin in the back where they tucked them away,” she said. “I immediately told my manager, ‘These are the toys I’ve been looking for for my Chihuahua friend in Kentucky!’”

Not only did the employees send Kelli & Jaxon the remaining Greenies, but they also made it a complete care package full of his favorite treats, along with a note.

Jaxon was very excited to have his favorite toy back.

“Happy to say the power of the internet came through BIG TIME,” Kelli wrote. “He is so happy right now.”

Kelli posted a video of the overjoyed dog frolicking in eight Greenies but said she would dole them out once so they could last the rest of his life.

“When I saw that [Jaxon] had received [the toys], I teared up a little,” she told The Dodo. “He’s a very good boy who deserves the world.”

The Internet can be a scary place sometimes, but this story shows how it can use to bring strangers together for a great cause. Thanks to everyone who made this happen and reunited this old dog with his favorite toy!