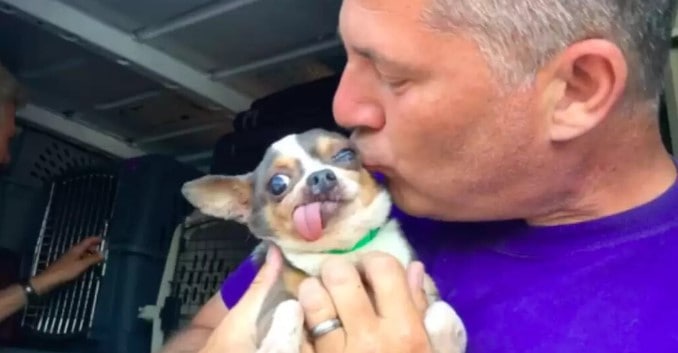 For the past nine years, Freddie the Chihuahua’s only home has been the four walls of a cramped wire cage.

Locked away his entire life to be used for breeding, Freddie rarely ever went outside and never knew what it was like to have a family of his own. He fathered hundreds of puppies he never met year after year until his owner wanted to get rid of him because he was too old to breed anymore.

Last weekend, National Mill Dog Rescue (NMDR) took in Freddie and 34 other dogs from a puppy mill in the Midwest, where many of the United States notorious large-scale breeding operations are located.

Like most dogs rescued from mills, Freddie was initially timid — but it wasn’t long before he welcomed cuddles and kisses from his rescuers.

“Life in a cage takes a heavy toll on dogs, physically and emotionally.” Theresa Strader, the founder of NMDR, told The Dodo. “Many of our dogs require extensive rehabilitation before they are ready to become family members, [but] Freddie certainly has a resilient spirit, and he is a spunky little guy.”

His radiant personality shone through when Strader gave him his first bed. A symbolic moment for many rescued mill dogs that marks the start of the many “firsts” to come.

It’s bittersweet, especially for senior dogs like Freddie, who has been stuck at the mills their whole lives while their puppies are sold to unsuspecting buyers online or at pet shops?

“It’s heartbreaking to realize they have been denied the basics until now,” Strader said.

When she first stepped into Freddie’s pen at the rescue center. Strader placed the bed on the floor, and the dog looked at it.

His tail was tucked between his legs.

But he was wagging simultaneously. She placed Freddie into the bed, and he instantly started jumping around and snuggling into it.

Due to a lack of dental care throughout his life, Freddie is missing all of his teeth, making his first attempt at chewing his new bed much more adorable.

“Freddie loved his bed immediately,” Strader said. “Other dogs can be more cautious and have no idea what a soft bed is for, but they learn very quickly. Freddie snuggled in from the beginning like he knew this was just one of many perks he will experience [now].”

Freddie’s next step in his new life is finding a home, but the staff can tell it won’t be long. Since the rescue shared the video of him enjoying his new bed, people have already begun applying to adopt him.

But until then, you can find Freddie happily nestled in his little bed. Flashing that sweet toothless grin at anyone he meets.