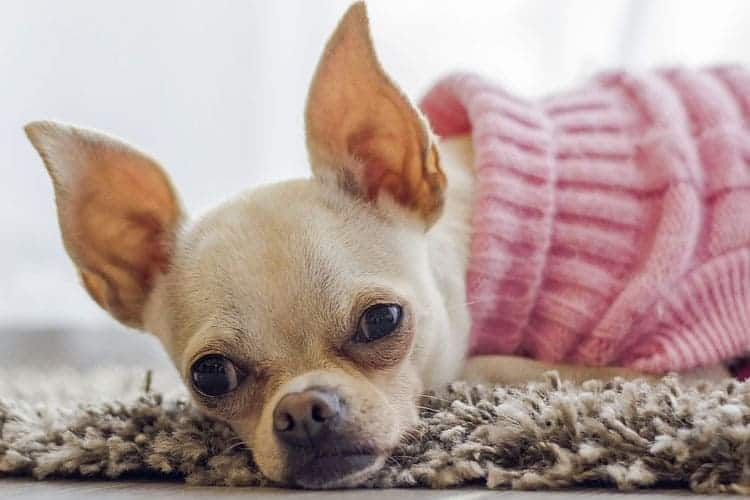 How to Discipline a Chihuahua Puppy?

Do you have a Chihuahua but you don’t know how to discipline him? Here are 7 Alternative Punishments.

Chihuahuas pick up on signals from their owners and learn a lot from how we react to them. If you put the hard work in with them early on, the way you train and raise them should lead to positive behavior for the remainder of their lives. However, that doesn’t mean you don’t need to take a disciplined approach at times. Chihuahuas can be very stubborn and have a character that can naturally lead them into trouble!

Good training and discipline should never be confused with physical punishment and loud shouting. No dog reacts well to aggressive behavior, and in fact, can mirror back anger with barking and possibly even biting.

But don’t think you can’t punish your Chihuahua puppy. You can punish a Chihuahua, but not in the way you think. Instead, you use disciplinary methods without doing anything that will hurt or scare them.

And this is exactly what I will explain today, with a guide that shows you how to discipline a Chihuahua, leading to a well-behaved and happy dog. There is no physical punishment involved, as it never should be with dogs.

How do you discipline a Chihuahua puppy without punishment?

As you know, Chihuahuas are stubborn little characters meaning it can be a struggle to get them to behave well at the right moments. But, with patience, perseverance, and a consistent approach to discipline it is possible to reduce unwanted behavior,

You will need to:

Use the following tips with your Chihuahua and you should never need to physically punish them. Not that you should ever hit a dog anyway!

1. Discipline them at the time of the offense

Chihuahuas don’t like being left alone and can become destructive due to separation anxiety. You might come home to find paperwork shredded, furniture torn, and shoes chewed up.

Whilst the temptation to shout might be your first response, your Chihuahua won’t understand that and correlate the angry owner with the shoe he destroyed earlier that day.

Chihuahuas do have good memories, but no dog will be able to reconcile you punishing them for something that they did earlier that day. Their brains aren’t wired to work that way.

The bottom line is unless you catch your Chihuahua being naughty in the act, there’s no point meeting out punishment once that bad behavior has already happened. Instead, you need to act at the moment and discipline your Chihuahua at the time with firm words and body language which are described in tip 2.

2. Use firm body language and tone of voice

Dogs will pick up on the most subtle of changes in your body language and voice. My recommended Chihuahua punishment method is to use a combination of the two; a firm “no” command with your finger raised and changing your face to frown from a smile.

Disciplining your Chihuahua in this way will help to cement your position in the household as the alpha dog and pack leader. If you end up shouting and hitting all you are doing is becoming a threat to the dog, making them more anxious. This can only exacerbate the behavioral problems you wanted to eliminate.

3. Stay consistent with the discipline and training

It’s easy for dogs to get confused so keep the way you act consistent and simple when disciplining your Chihuahua.

To give you a real-world example, let’s say you slap your thighs to get them to jump up to you on Friday to give them love. Then on Saturday your Chihuahua jumps up to a stranger and puts dirty paws all over them… and you then tell the puppy off.

Your Chihuahua is getting mixed messages here.

This mixed approach to training is one of the biggest mistakes you can make with your Chihuahua. When our dog was a puppy I would gently play fight with him in our lounge, encouraging him to nip at my hands. It was a fun game and didn’t hurt as he was so young. I should never have started this game though…

When my puppy got to 5 months old, the teeth were sharper and his jaw a lot stronger. But he still wanted to play the same game, but it was now a problem as you can imagine. I was telling him to stop, and he couldn’t understand why as it’s something I’d previously encouraged him to do.

You need to be very consistent with any Chihuahua discipline. If you stick to the same approach each time, results will come to a lot quicker.

After you have disciplined your Chihuahua and are heading towards the behavior you desire, always reward them with positive reinforcement when they do well.

Dogs can be trained to respond to a treat or the promise of a treat. Dogs also respond well to just words of encouragement and praise each time they get something right.

If you’re training your dog to come back to you when off the leash, treats can work wonders. Withholding treats is a way of punishing a Chihuahua by showing them they didn’t quite hit the high standards you demand of them!

5. Take breaks and give them a timeout

You can also teach your Chihuahua good behavior by using verbal hints and time-outs.

Let’s say you are playing with your Chihuahua and he nips at your hands. You can respond with a firm “ouch” sound, turn around with your back to your Chihuahua, then walk out of the room.

What you’ve done here is stop the very thing your Chihuahua wanted to do which was to have fun and play with you. The loud “ouch” also tells your Chihuahua they hurt you; dogs will yelp when hurt, so we assume they correlate the sound to meaning pain.

After doing this a few times, you can teach your Chihuahua that if they bite you or do something naught during play, then the fun stops. Time outs are brilliant ways to punish Chihuahuas; 5 minutes probably feels like 5 hours!

Some Chihuahua owners use a water pistol to discourage bad behavior. It’s not something I’ve ever tried with my own dog, but many people say it’s a punishment and disciplining method.

All you do is give your Chihuahua a little squirt of water when he or she misbehaves, and use that firm “no” command and body language at the same time.

As a last resort, you can use distraction to stop a Chihuahua from doing something bad. For example, my dog loves sticks. If I say the word “stick” he will drop everything he’s doing and run straight toward me.

When we’re out this can be really helpful. I used it last week when we were at our local park and my dog went to steal a sandwich from a young couple having a picnic. Before he get himself into too much trouble, I used the “stick” distraction and he bounded back to me.

It’s a classic distraction method and any type of distraction can work very well if the discipline isn’t working or you don’t have time.

How you should NOT discipline your Chihuahua

To bring things full circle I wanted to reiterate all the ways you should not punish a Chihuahua.

Many Chihuahua owners will know how hard this breed can be to train. But if you stick with it, it will be worth it in the long run and save you a lot of problems in the future.

Just remember that Chihuahuas don’t connect the punishment you mete out, with the thing they have just done. That can make it harder to get them to rectify any bad behavior, instead making them scared when shouting and hitting are used.

Instead, use timely discipline and positive reinforcement. This is the best way to discipline a Chihuahua puppy and will result in a very happy dog… and owner!