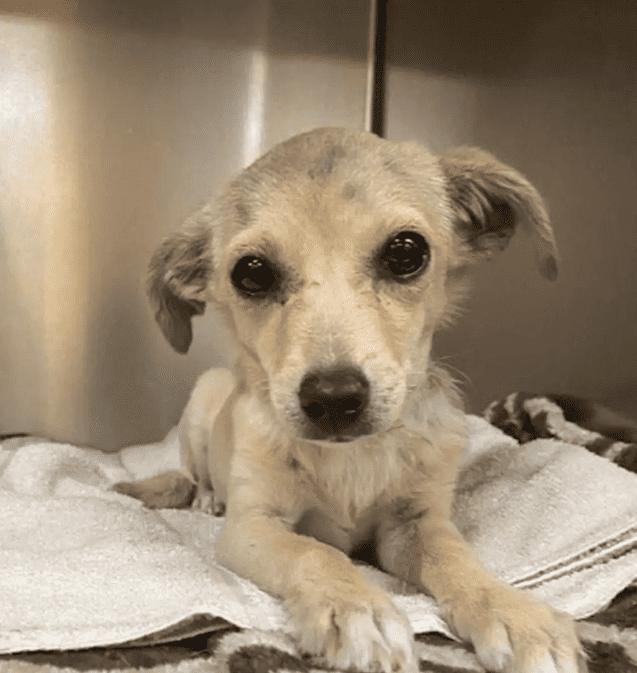 Chihuahua Survives After Being Shot in the Neck by an Arrow

“For someone to willfully shoot this poor pup with an arrow is disgusting,” Riverside County Department of Animal Services Director Erin Gettis said in a statement.

A 4-month-old chihuahua is expected to pull through after being pierced in the neck with an arrow in California.

Police received a call from a woman who found an injured chihuahua in Desert Hot Springs. She told police that she was awakened to the tan chihuahua “screaming.”

A deputy was able to rescue the dog before meeting Animal Services officer Matthew Perez at a nearby intersection to deliver the pup. Officer Perez took it to the Coachella Valley Animal Campus for treatment.

“He held the dog and comforted it,” Animal Services said of Officer Perez. The release added that the dog received treatment. And they “expected him to survive,” noting that the arrow didn’t hit any “vital arteries.”

This happened today — and our team saved the dog’s life. Thank you so much to ⁦@RSO⁩ for major assistance! Terrible act! ⁦@RivCoNow⁩ #Chihuahua #veterinarycare #animalcruelty pic.twitter.com/04R5CLgnkU

They save the dog

“Ivan did such an amazing job to save this dog’s life,” said Veterinary technician Emily Ellison, who helped Herrera treat the pup, per the news release. “It’s amazing to see her affection, despite what occurred. She is such a sweet puppy, and I cannot imagine why anyone would do something terrible to such an innocent creature. It’s very sick.”

“For someone to willfully shoot this poor pup with an arrow is disgusting,” Animal Services Director Erin Gettis said in a statement on the website. “We are shocked, and we hope someone can provide us any information as to who did this. Meanwhile, we’ll continue to treat this puppy and work on finding her a suitable home.”

The Riverside County Department of Animal Services did not immediately respond to PEOPLE’s request for comment.

On Monday, the animal protection group shared a photo of Officer Perez holding the chihuahua, writing, “This happened today — and our team saved the dog’s life. Thank you so much to ⁦@RSO⁩ for your major assistance! Terrible act!”

It later added a series of photos of the dog and wrote, “Sweet baby, recovering after arrow shot in her….@RivCoNow.”