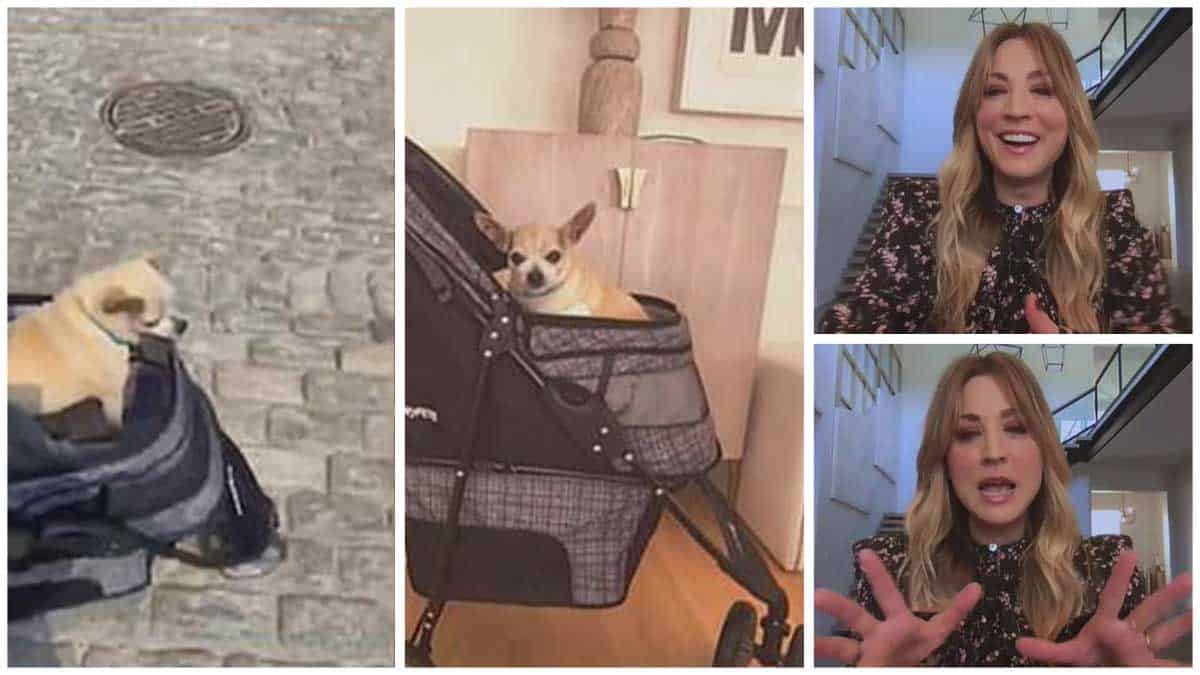 Kaley Cuoco joked that she was jealous of her elderly chihuahua Sir Dump Truck. That was on Monday during an appearance on Late Night With Seth Meyers on NBC.

According to the 34-year-old actress, the dog has been stealing her press attention.

While walking the 10-year-old canine outside her Tribeca home recently, she was annoyed to see the paparazzi. But she soon realized who the cameras were there for.

‘Every time I’d come down early in the morning to take Dumpy out to the bathroom, there were paparazzi,’ Kaley said. ‘And I’m thinking, ”Oh, my god. They just won’t leave me alone”. Well, an article came out a few days later that my girlfriend sent me. And said, ”Dump Truck goes to the bathroom with the blonde owner.” Had nothing to do with me!

‘I was pretty p***ed, let me tell you,’ she continued. ‘The narcissist inside me thought everyone wanted to see me, but I was sorely mistaken.’

Kaley and her husband Karl Cook, took in the sweet dog this past spring. They quarantining due to the coronavirus pandemic.

She said they had spent their quarantine ‘surrounded by a lot of dogs and a lot of alcohol’. But she’d fallen in love and had to adopt Sir Dump Truck, aka ‘Dumpy.’

Kaley described Dumpy’s old life as ‘very traumatic,’ admitting that she couldn’t help fall for him.

Kaley grimaced as Seth showed a video of her pushing her dog in a stroller, and admitted, ‘I didn’t want to be that person you know. We have multiple dogs, none of which have strollers.’

While shooting her new HBO Max miniseries, The Flight Attendant, in New York City, Kaley put Dumpy in a stroller so that he could get around more easily.

‘In the stroller, he has this bravery and self-assurance,’ the former Big Bang Theory actress marveled. ‘As you can see, he barks. He becomes completely aggressive in the stroller. I don’t know what comes over in his brain.’

Kaley told Seth about what it was like to film and executive-produce The Flight Attendant, which will begin airing on November 26.

‘It rides a wave of adventure and sadness,’ she said. ‘There’s a brutal murder, but since I can’t help but be a little funny here and there, it was definitely written in my voice.’

The show was shot in Thailand and Italy, right at the end of January ‘right before things started shutting down,’ Kaley remembered. After a few months off, the cast went back to Italy to shoot what were supposed to be winter scenes in New York.

‘It was beautiful and summer and everyone in the background was wearing masks,’ she said, laughing. ‘So it was a very strange— when we looked at dailies we were like, ‘Oh, my God, that guy’s got a mask on.’

Making matters worse, she said, the show had just six extras that they used for two-and-a-half months.

‘We kept putting them in different wigs, different outfits, kind of mixing and matching them, on the plane, too. ‘Cause, we had to have them enter the plane. These people look like they take a lot of flights if anybody notices. But it was the only way we could do it,’ Kaley said.

Kaley founded her production company Yes, Norman Productions in 2017 and named it after her dog Norman.