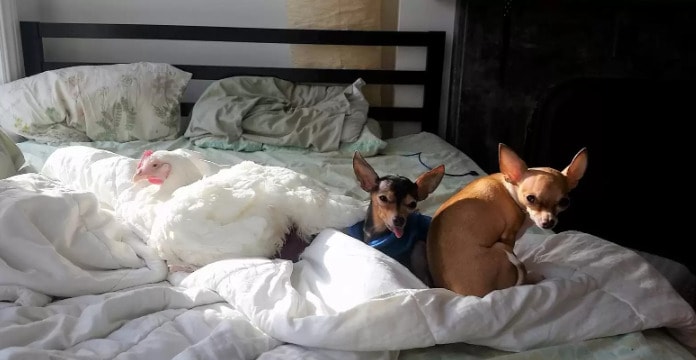 “Rose, the rescued chicken… will walk right up to the Chihuahuas and make a point of lying next to them.”

Of all the excuses for not making the bed, Rocky Schwartz and Jay Shooster may have the best.

The couple, from Brooklyn, New York, has four.

And, of course, there’s Rose.

Together, they make a family – three Chihuahuas and a chicken. And all of them join forces, making it near impossible for Schwartz to get fresh sheets on the bed.

But they all share one reason for cherishing the warmth of their favorite humans’ bed.

Each one of them came from a cold, hard place.

“Bambi and Ginger were abandoned together on the New York City subway last spring,” Schwartz tells The Dodo.

And Biscuit, the Chihuahua with the dangling tongue, was dumped at a grocery store with a broken leg.

“They all passed through,” Schwartz says. “I’m completely smitten with them.”

It didn’t take long for these dogs to discover that home is where the bed is.

“Chihuahuas are kind of renowned for sleeping a lot,” Schwartz explains. “They’re kind of like the cats of the dog world. They sleep for like at least 12 hours a day.

They’re very adamant about being under blankets,” she adds. “So as soon as you put any piece of fabric down – on the floor or the bed – they immediately run up to it and get under it.”

Bambi is particularly picky about not being disturbed when she’s swaddled in blankets.

And then there’s Rose, the chicken on her way to a very different ending before Schwartz found her.

She’s a refugee from kapparot, an ultra-orthodox rite that involves swinging chickens in the air before brutally slaughtering them.

“In Brooklyn, they kill about 50,000 right out on the street,” Schwartz says.

While protesting the ritual over the summer, Schwartz convinced one of the participants to forgo the slaughter. Instead of brutal death that day, Rose came home with Schwartz – and a beautiful life truly began.

Like her new furry siblings, Rose revealed a taste for the soft life.

But for complicated reasons. Outside, a chicken will often give herself a dust bath, flapping her wings on the ground and whipping up a dirt storm.

“She’ll have the indoor version of a dust bath on the bed,” Schwartz says. “She likes to do it right on the bed’s fabric.”

It’s not just the fabric that lures Rose to those linen folds – but also the feeling of family.

“And they all cuddle together. Rose kind of sits in with all the Chihuahuas. They’ll all be at the door when I get home. She also will walk right up to the Chihuahuas and make a point of lying right next to them.”