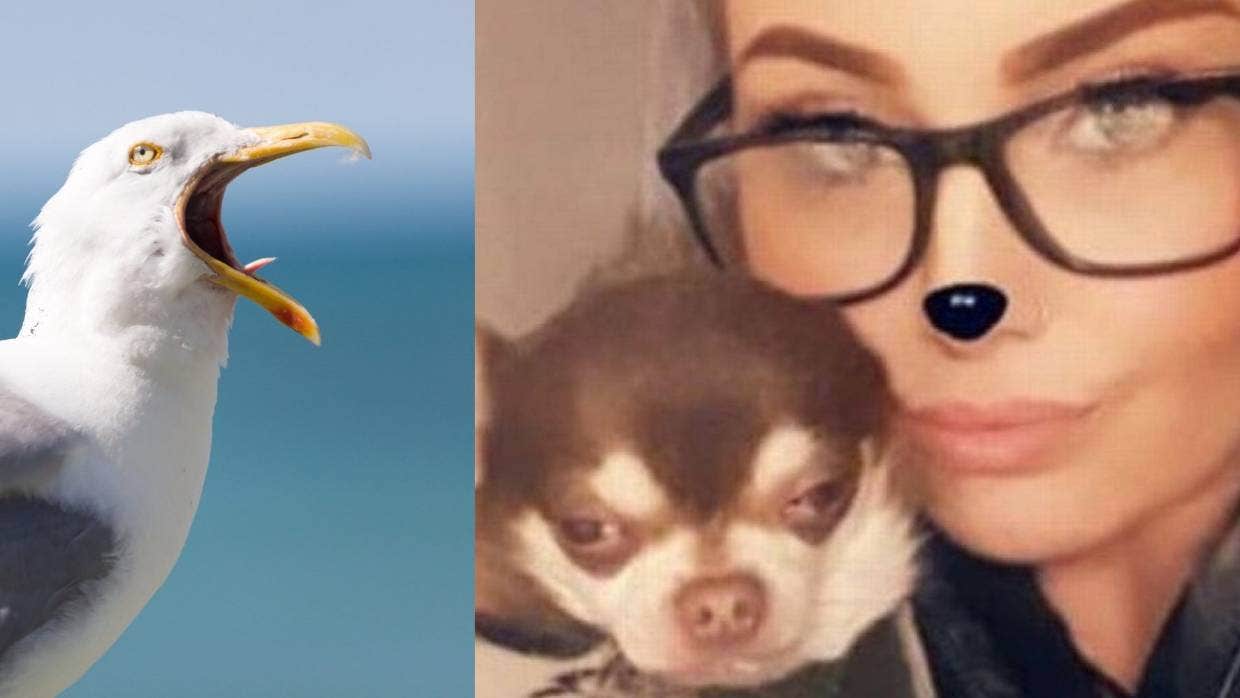 Revolting discoveries have been reported after panic erupted over a suspected dog-eating seagull in England.

Devon woman Becca Hill’s chihuahua Gizmo was allegedly snatched last week. And British and Irish media have been awash with horror stories ever since.

The seagull saga has even inspired British MP John Woodcock to call for seagulls to be given contraceptives.

“It all happened so quickly. One minute he was in the garden, and then there was a yelp,” Hill told British tabloid The Sun, which has put up a £5000 ($9200) reward to find Gizmo.

The next thing Hill remembered, her partner Ashley saw the seagull making off with Gizmo. But now, the same bird has been fingered as a suspect in the abduction and killing of a rabbit and a pigeon.

What did the experts say?

Experts reportedly examined a leg bone discovered on a roof 10km from the abduction scene.

“We had to get someone out to remove a chicken’s head not long ago, as well as the body of a gull that had been cannibalized,” resident Natalie Williams told The Sun on Sunday.

“…I found what can only be described as a mammal’s leg on a fire escape at the back. I immediately thought of Gizmo as it looks like it belongs to a dog.”

The bone was now thought to be from a rabbit – but there was still no trace of Gizmo.

This week, a ravenous giant seagull was seen eating a pigeon. This happened just a few meters from where the chihuahua was abducted.

The southwest of England is known to travelers for its beaches, surfing, and pirate-related tourist attractions. It is also fabled for its bellicose seabirds.

But stories of dog-eating seagulls are not simply urban myths. In 2015, Niki Wayne of Devon lost her chihuahua Bella to voracious seabirds.

“Tragedy struck when her owner was in the shower, and Bella managed to nudge open a slightly ajar door and was killed by the seagulls,” the Daily Mirror reported.

Who was “the phenomenon”

Meanwhile, seagulls in some English coastal regions have reportedly been drunk on beer dregs, hallucinating after eating flying ants, and passing out and vomiting.

The “phenomenon” was first reported when firefighters in Devon were called to rescue one seagull and found it reeking of beer and too drunk to fly. It then “threw up all over them,” Cornwall Live reported.

In New Zealand, the native black-billed gull has been described as “the most threatened gull on the planet“

The Department of Conservation (DOC) has classified the black-billed gull as nationally critical.

The bird’s population was down to only 60,000 breeding adults and expected to decline by up to 70 percent over ten years or three generations.