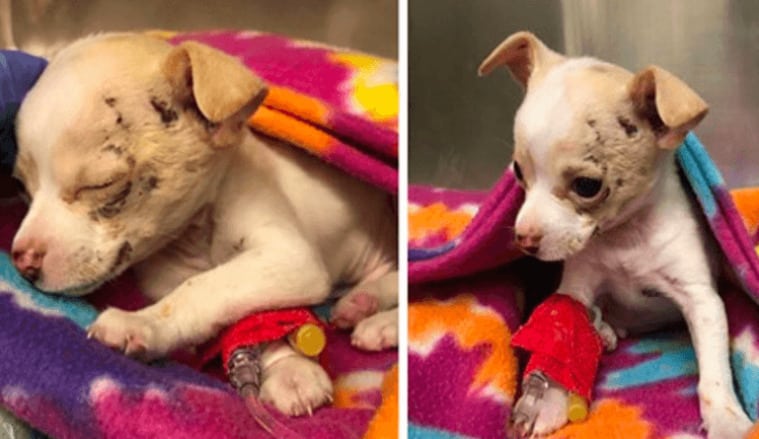 This is one of the most miraculous stories ever. It is about a 6-week-old pup who survived a horrible incident. The story began when a group of construction workers heard the urgent cries of the tiny puppy after having a busy day. So, they directly knew that they had to do something now. They started searching and following the sound, but they found nothing, but they still heard the cries, so one of them looked above and realized that the screams were coming from above. It was heartbreaking when they saw a small Chihuahua pup gripped in the talons of a hawk who was circling the sky with it.

They were all completely shocked and didn’t know what to do. But the hawk released the Chihuahua, who came careening down. So, the workers ran over directly to check on the pup, and they could not believe what they saw. Fortunately, it hurt the dog, but it wasn’t that bad. Let the workers scoop him and brought him to the nearest veterinarian. And where he was examined and known that he would be fine.

The tiny puppy, which it took to Austin Animal Center (AAC), had several scratches and some bruises and bumps, but keeping in mind that he was thrown from the sky by a hawk, he was in fantastic shape. After the horrible incident with the hawk, he was given IV fluids to build his strength.

Thankfully, the little Chihuahua named Tony Hawk is now recovering and receiving proper nutrition. And he will be available for adoption once he is completely recovered. Share this with your family and friends.https://www.youtube.com/embed/Ey59-qjhuQoOriginally appeared on: The Dodo