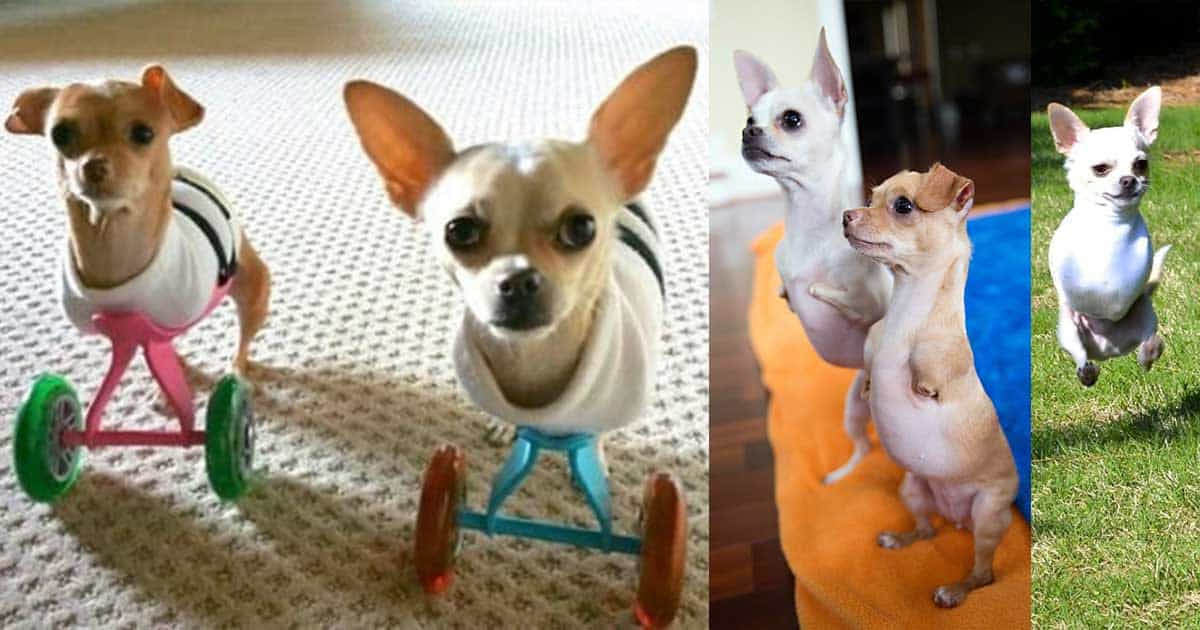 After the death of their beloved dogs of 16 years, Therese Vu and her husband, Duc Tran, never thought they’d get another pooch. But, these two-legged Chihuahua siblings proved them wrong.

It was just too sad for them.

But that was before they met Kanga and Roo.

Kanga and Roo are a brother-and-sister duo of chihuahuas, both of whom happen to be missing their front legs. They were born without them, and the missing limbs are likely the result of overbreeding. Their special needs proved to be too much for their breeder, who ended up surrendering them to Angels Among Us, a rescue organization.

And that’s where Vu and Tran first spotted this different but totally indomitable pair.

“As soon as I saw Kanga and Roo, I just knew they were meant to be ours,” Vu says.

Of course, caring for special needs animals is a little different than your average pet adoption, as dogs like Kanga and Roo face different challenges. Even something as simple as going up the stairs is a huge feat for them.

But Vu and Tran weren’t deterred. They did lots of research, and by the time they met Kanga and Roo, they were smitten. “Within the first few seconds of interacting with them, they captured our hearts, took over our home, and completely changed our world,” Vu says.

The couple adopted Kanga and Roo back, and today, they can’t imagine life without them.

Therese Vu and Duc Tran never thought they’d get another dog after theirs passed away, but they soon found themselves falling in love with Kanga and Roo — a brother-and-sister pair of chihuahuas who, due to overbreeding, were born without front legs.

Today, the dogs are five years old, and they don’t let a little thing — like a few missing limbs — get in the way of living full and happy lives.

Vu and Tran also made sure their home was accessible for them, lining their home with padding so Kanga and Roo could scoot around with ease.

And scoot they certainly can. Since they were born without front legs, they’re very good at getting around, and manage pretty well both indoors and out.

And they certainly have no shortage of energy.

And they love exploring the world. Neither Kanga, the white male, nor Roo, the brown female, seem to mind that they only have hind legs. They’re happy to hang out, play, and cuddle all day.

And as you can see, they’re always ready to make some new friends.

And they never leave each other’s sides.

Of course, the pair does sometimes need help getting around, so Vu and Tran had little wheels made for them. Luckily, the couple is also friends with someone who works in (human) prosthetics, and was able to make tiny sweaters for the dogs from the same material human prosthetic-wearers use to prevent chafing and irritation.

And there are no armholes necessary.

When it comes to getting around with ease, Kanga and Roo each have their own set of wheels.

And when they’re not zipping around on their wheels, they love to snuggle. Kanga apparently likes to use Roo as his personal pillow.

Together, and thanks to their loving humans, this pair will live happy and comfortable lives. However, Vu and Tran also want to make people aware of the dangers of overbreeding and inbreeding in dogs, and make sure that future generations of dogs are as healthy as possible.

You can keep up with Kanga and Roo on Facebook, and consider donating to rescue organizations, like Angels Among Us, to make sure all dogs — no matter what they look like — find happy homes.

Do you love dogs who might look a little different? If so, SHARE Kanga and Roo’s story with everyone you know!