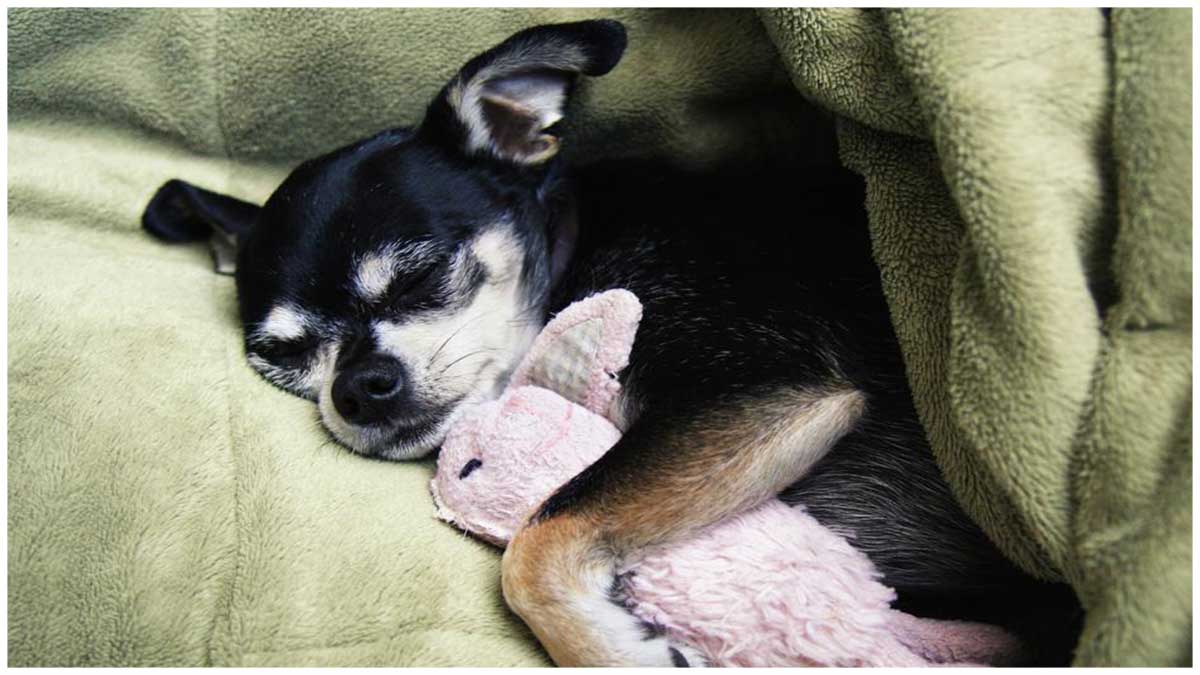 What Do Dogs Dream About?

When Fido’s legs twitch in his sleep, is he really dreaming of chasing rabbits? That begs one simple question. What do dogs dream about?

Probably, researchers say. The “rabbits” part is up for debate, but the scientific evidence strongly suggests that not only do dogs dream, but they likely dream about waking activities, much like humans do.

“Dogs do dream,” said Stanley Coren, a professor emeritus of psychology at the University of British Columbia and the author of “Do Dogs Dream? Nearly Everything Your Dog Wants You to Know” (Norton, 2012).

Dogs sleep more than people do, Coren told Live Science, and they have a particular penchant for catnaps. But the structure of their sleep looks remarkably human: Like humans, dogs cycle through stages of wakefulness, rapid-eye-movement (REM) sleep, and non-rapid-eye-movement sleep. Scientists reporting in the journal Physiological Behavior in 1977 recorded the electrical activity of the brains of six-pointer dogs for 24 hours and found that the dogs spent 44 percent of their time alert, 21 percent drowsy, and 12 percent in REM sleep. They also spent 23 percent of their time in the deepest stage of non-REM sleep, called slow-wave sleep.

People dream in both REM and non-REM sleep, but the dreams that most people remember are REM dreams. In this stage, dreams are memorable and often bizarre. Plus, people are more likely to awaken right after REM sleep than after non-REM sleep, said Matthew Wilson, a cognitive scientist who researches learning and memory at the Massachusetts Institute of Technology. By comparison, non-REM dreams are rather mundane, Wilson told Live Science.

So, What Do Dogs Dream About?

In 2001, Wilson and his colleagues were the first to find that rats dream — or, at least, their brains do the same thing people’s brains do during dreaming, and to similar effect. First, the researchers recorded the activity of multiple neurons in the rats’ brains while they did repetitive maze tasks. Next, they recorded the same neurons during REM sleep.

In 44 percent of REM sleep episodes, the researchers found brain patterns that matched those that the rats had produced during their waking maze runs. The patterns lasted for minutes at a time and “played” at the same rate as they did when the rats were awake. In other words, the animals seemed to be reliving their waking activities in REM sleep, the researchers reported in 2001 in the journal Neuron.

The next year, Wilson’s group reported similar brain activity echoes of daily life in rats’ non-REM sleep. But in non-REM sleep, the brain-wave patterns were shorter and faster, instead of mimicking real-time, and the patterns showed up only in naps right after the real-world activities.

Still, there’s evidence that these non-REM activity bursts are dreamlike for rats, just as similar brain activity is dreamlike (but forgettable) in humans. Wilson and his colleagues found that while these telltale neurons were firing in the hippocampus — the wrinkly blob of the brain at the base of the skull that’s linked to memory and learning — neurons in their visual cortex were firing, too.

“They were ‘seeing’ what the hippocampus was dreaming about,” Wilson said.

The finding that rats dream is a good indication that dreaming is common across mammals. In fact, non-REM sleep is seen in all vertebrates (animals with backbones) and may even extend to some invertebrates, like fruit flies. Thus, even flies may dream in some form, Wilson said.

The reason the dreamy brain patterns of REM and non-REM sleep are so common seems to have something to do with their role in learning and memory. Sleep boosts memory formation, and disrupted sleep can impede memory.

Sleep “adds something” to the process of learning and remembering, Wilson said. Patterns in non-REM sleep seem to suggest a sort of categorizing of the day’s activities. REM sleep, on the other hand, maybe an avenue for the brain to explore in a consequence-free environment.

“The idea is that, in sleep, the brain is trying to find shortcuts or connections between things that you may have experienced but you just hadn’t put them together,” Wilson said. The bizarre sleep imagery of REM dreams could be a manifestation of this deeper process, he said.

But back to those snoozing Saint Bernards and Scottish terriers. Dogs enter REM sleep about 20 minutes into a snooze session and might stay there for 2 or 3 minutes. An observant owner might notice the animal’s breathing become irregular, Coren said. In puppies and very old dogs, the muscles might twitch. In both dogs and humans, part of the brain stem called the pons is responsible for paralyzing the large muscles during sleep, which keeps people and pets alike from acting out their dreams. The pons is underdeveloped in puppies and may not work as efficiently in old dogs, Coren said, which is why these pooches are more likely to twitch than dogs in their middle years. (The same is true of very young and very old humans.)

Studies in which the muscle-paralyzing part of the pons has been temporarily deactivated are the only way to peek into doggy dreams. With the pons offline, dogs start to act out their dreams (in humans, this condition is called REM sleep disorder).

“What we’ve basically found is that dogs dream doggy things,” Coren said. “So, pointers will point at dream birds, and Dobermans will chase dream burglars. The dream pattern in dogs seems to be very similar to the dream pattern in humans.”

Dog sleep is similar to human sleep in other ways. Dogs probably have nightmares, just as humans do, Cohen said. They can also get narcolepsy, a disorder that causes the brain to fall into sudden sleep. In fact, research into a line of narcoleptic dogs at Stanford University unraveled the biochemistry behind the human form of the condition.

But dogs probably escape one common human sleep problem: sleep paralysis. In this condition, consciousness returns before the brain “switches on” the muscles again, so people awaken but can’t move. Sleep paralysis is often the result of sleep deprivation, which is a rare condition for dogs, Coren said.

“You give a dog an opportunity, and he lies down and he closes his eyes,” he said.