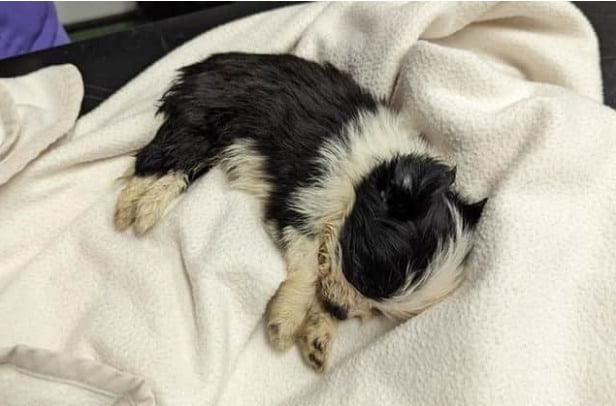 The RSPCA has launched an investigation after a dying puppy was found dumped in two sealed-up plastic bags in a remote spot near Pontefract. The three-week-old chihuahua-cross puppy was found yesterday in Bank Wood Road, Darrington, at 1.30 pm. A female passerby came across the sealed plastic bags and was shocked to see the pet inside.

She initially thought the pet had died as he was cold and unresponsive. However, once in her car, the black and white pup began to warm up and show signs of life. So she rushed him to nearby vets and reported the matter to the RSPCA.

Sadly, despite the best efforts of the veterinary staff – the puppy became unresponsive. And sadly, the vet decided to put the pet to sleep to end his suffering.

RSPCA Animal Rescue Officer Ollie Wilkes, who is investigating, said: “This poor pup was discarded like a piece of rubbish in a sealed-up bag. And it was so lucky he did not suffocate. I am keen to find the callous person who did this. And left him to die alone at the side of the road.

“It was fortunate he was found. But sadly the vet was unable to save the poor puppy. But I take some comfort in the fact he was not alone and was loved in his last moments.

“I have no idea why anyone would do such a vile act – perhaps he was an unwanted puppy in a litter – but to leave him like this is abhorrent.

“It is unfortunate, and I am appealing to anyone who knows someone who had a puppy like this or who may have seen something suspicious in the area around the time it found the puppy to contact the RSPCA appeals line on 0300 123 8018.”