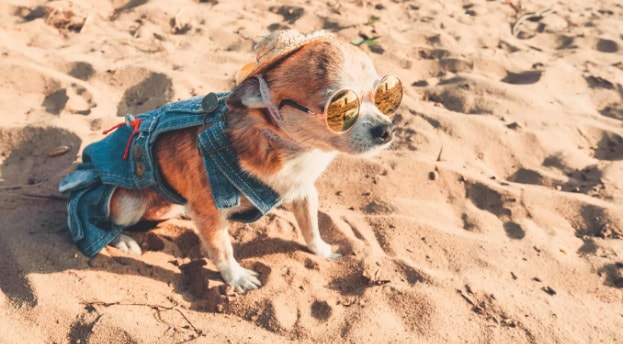 A dog has become an internet sensation for his hilarious trot, capturing the hearts of millions. Pushkin, an elderly Chihuahua cross miniature pincher, has gained the adoration of fans online. And after his owner shared a series of videos showing his unique walk. Uploaded just a day ago, Pushkin is paired with popular TikTok audio: “Tell Jesus that the b***h is back.” The humorous audio soundtracked Pushkin’s hilarious run as he trotted towards the camera to the sound of the upbeat song “212” by Azealia Banks.

Instead of a regular walk, Pushkin “trots” as his whole body bobs from side to side. According to his owner, “he’s just old” and is very much “happy and healthy.”

Pushkin’s owner has gained over 20,000 followers and a combined 3 million likes with her dog’s lovely trot. The most recent video has gained over 1.5 million views and 300,000 likes.

Pushkin trots along in the video as his body bounces from side to side, his tail following in unison.

“My favorite dog ever,” wrote one TikTok user.

“Me on the way to spend my entire check on unnecessary things,” joked another viewer.

“I just adore the swagger,” added another.

Other videos on the account similarly rack up views in the millions, seeing Pushkin sporting Hawaiian shirts or knitted sweaters while running.

Dogs finding internet fame is anything but rare, with canines gaining their very own mass followings online. According to the 2021 Dog Instagram Rich List by ProDog Raw, pet celebrity Loki is the top earner, earning $6,800 per post and making a yearly income of $380,800.

While dogs finding fame for their unique movements is an even more specific niche, it’s not a standalone experience for Pushkin. As reported by Newsweek, Pitbull mix Ivy is also a TikTok celebrity for her entertaining walk.

The dog, known online as @ivyvibing, has over 3.6 million followers and is loved for how she jumps. Looking just like a frog.

Ivy has Short Spine Syndrome, a low condition that causes her to have a normal-sized head fused onto her shoulders, making it appear like she has no neck.

Through the TikTok account, they regularly joke that Ivy was bred with frog DNA, giving her that hunched-over appearance.

“The jokes don’t bother us very much. Misinformation about Ivy and us do, so we tend to avoid most comments on any of our videos that go viral,” they told Newsweek.