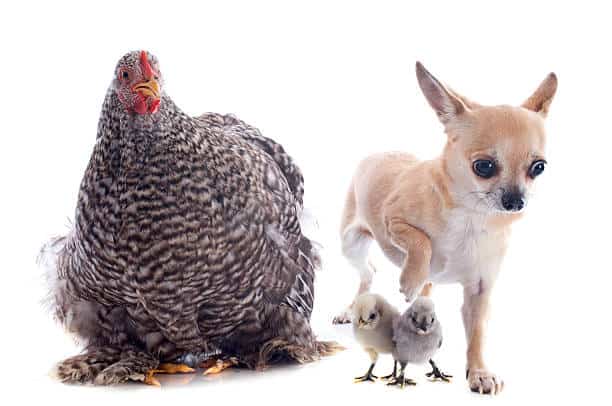 Some life decisions are better than others. This one, made by an over-confident rooster, was not the best. This cranky bird decided that he did not like the presence of this little dog in what he considered ‘his’ yard and soon realized that he had made a mistake!

Roosters are actually male chicken (Gallus gallus domesticus), and we can also see several female chickens in this short clip. They are the domesticated subspecies of the red jungle fowl and are used for meat and eggs all over the world. Although in some areas, roosters are also bred for fighting and they are called gamecocks.

Chickens are very social animals and live as a flock and by looking at the rooster’s role in the flock we can see why he may have behaved the way he did. The roosters are the leaders – they protect the flock and in return, they have the right to mate with all of the female chickens.

They also maintain the pecking order and are involved in deciding which hens have dominance over the others. The roosters use their famous crow to warn the flock that danger is near, and little roosters learn to crow at around four months. When you are a chicken, a Chihuahua is seen as a danger!

This Chihuahua gets the better of the rooster. The little dog snarls, bares its teeth, and growls. They have their tail between their legs in a posture indicating that the dog is uncomfortable. The dog is also backed into a corner, so, to be fair, they have no choice but to defend themselves.

The dog leaps at the rooster, securing the bird in their front legs and bundles the rooster on to the ground. At one point, the pooch looks confused and unsure what to do next. The female chickens also look on in bemusement.

Chihuahuas are a popular breed of a pet dog who have personalities that are so much bigger than their bodies! They can trace their origins back to Mexico and are one of the smallest dog breeds in the world. The one in this clip is not that much bigger than the rooster and is a similar color.

They are loyal and affectionate with their owners but can be very wary (sometimes aggressive) towards strangers. It seems from this clip that they also do not like roosters! 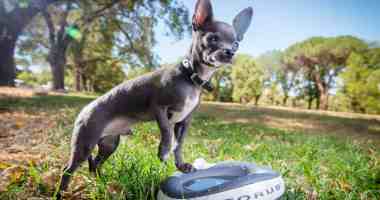 The most important person in a dog’s life is their owner. With…