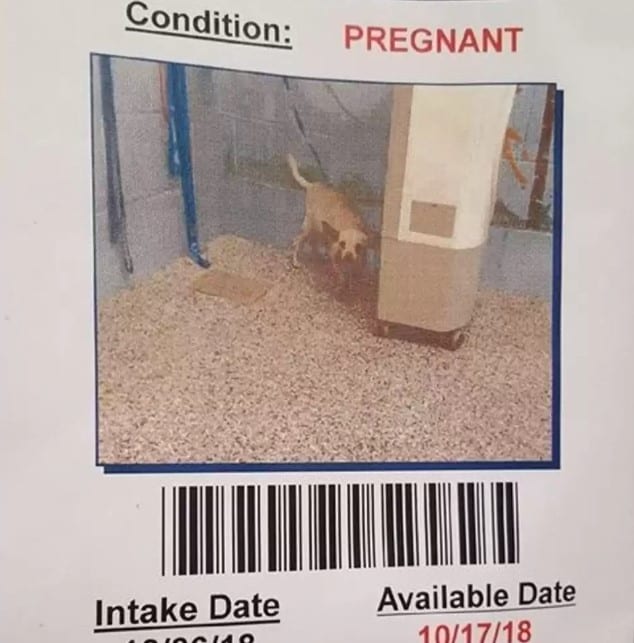 When Kathryn Sinske came across Claire’s photo on Facebook, something in the pregnant Chihuahua’s eyes immediately caught her attention. Whether it was pain or fear in Claire’s expression, Senske stopped scrolling and decided to take action.

“When I saw her on social media, my heart broke for her,” Senske told The Dodo. “She was listed as an older pregnant female ready to give birth any day. And she looked terrified and confused in her shelter picture.”

Animal control had picked up Claire in San Bernardino, California, and her swollen belly made clear that the officers had found her just in time. Days after arriving at the shelter, Claire went into labor alone in the early morning hours. “She was placed in isolation and given a blanket to have her babies,” Senske said. “She had four puppies, but one did not make it.”

As soon as Sinske learned of the puppies’ arrival, she rushed to the shelter to break the little family out of confinement after seeing that the nervous new mother was filthy and covered in ticks.

“They handed her to me in a carrier. And I could tell she was super scared,” Senske said.

“I even had to sign a waiver because she was fearful.”

Sinske promised to do everything in her power to help the little family survive — a job that became more difficult the next day when Claire’s health plummeted. Claire was anemic and suffering from a fever of 105 degrees.
So Senske had to step in as mom for the sick dog and her babies.

After a week of visits to the vet and hand-feeding both Claire and her babies, Senske was delighted to see the little dog’s temperature return to normal. And while Claire has proven to be a picky eater, Senske is happy to indulge her whims.

“After everything she’s been through. I have no problem ensuring she gets what she wants,” Senske said. “She is so sweet, loves to get lots of love and sit in my lap.”

Once the puppies are weaned, Claire is given a clean bill of health. The entire family will begin their search for a forever home.

But after a hard life, Claire is happy to be safe finally and give her babies everything they need, Senske noted: “She’s a great mama.”