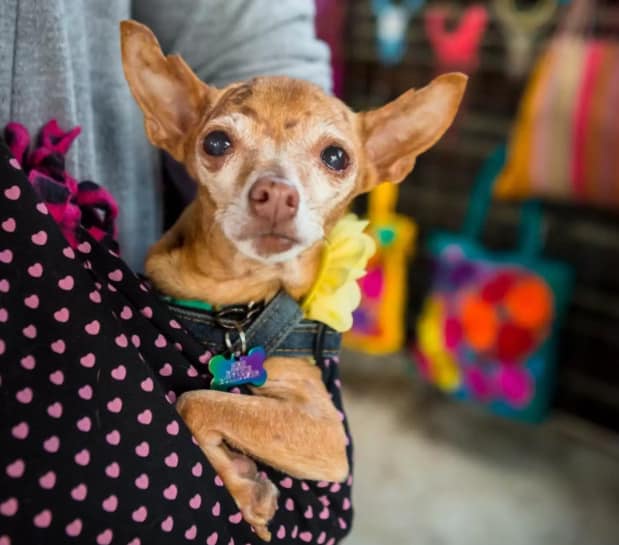 “She’s super spunky now, which is pretty crazy.” Ruthie was found as a stray living on Abilene, Texas streets and taken to a local shelter. The 16-year-old Chihuahua mix was in bad shape when she first arrived. And didn’t seem like she would make it. Ruthie was severely underweight and flea-ridden and suffered from an eye infection, skin infection, and gum disease. The shelter kept her isolated because she had difficulty dealing with shelter life on top of her health issues. And they didn’t want her to be any more stressed out than she already was.

No one seemed to believe that Ruthie would pull through. Until Forgotten Friends Mixed Breed Rescue found out about her and immediately knew she deserved a chance.

After being pulled from the shelter by the rescue, Ruthie got settled into a foster home. Her new friends, on her return, started tackling her many medical issues, including having her rotting teeth pulled. It’s often harder to find homes for senior animals, especially 16-year-old dogs. And yet it wasn’t long before the perfect family found out about Ruthie and fell in love with her.

Jen Ramey and her husband were in the process of planning a birthday party for their dog Buttercup and decided to use the party to raise money for Forgotten Friends Mixed Breed Rescue. The rescue was planning on bringing some of its dogs to the party, including Ruthie, and as soon as the couple met the senior Chihuahua, they knew she was meant to be the newest member of their family.

“I thought she was the sweetest little pup and honestly didn’t think we could handle another dog, but couldn’t stop thinking about her,” Ramey told us. “When my husband suggested adopting her if no one expressed interest by the end of the month. I submitted the online application, and we picked her up the next day!”

Ramey and her husband were aware of Ruthie’s medical issues and were prepared to deal with them and all of the other challenges that come with adopting a senior dog. After all, she’d been through and all she was dealing with medically. And they assumed Ruthie would be the kind of old dog who was incredibly mellow and just wanted to relax all the time. But as soon as she arrived in her new home, Ruthie quickly proved them wrong.

“Right away, she wanted Buttercup to know she was here to stay,” Ramey said. “We expected her to be a chill old lady, but that wasn’t exactly the case.”

From the beginning, Ruthie was full of energy and had no problem keeping up with her much younger sister. She loves being involved in everything her family does and can’t stand being left out. And she likes every person she meets and wants nothing more than to be held, cuddled, and adored by everyone around her.

“She loves eating and stealing the thunder from her sister,” Ramey said. “We thought she’d be tired and chill all the time, but she’s super spunky now, which is pretty crazy considering her age and medical issues.”

Ruthie’s overall condition has improved a lot since she was adopted, but she still has a lot of issues to deal with. She has trouble putting on weight and has suffered from a collapsed trachea. She also has scarred lungs from chronic bronchitis, inflamed airway disease, and an inoperable inguinal hernia. None of this slows her down at all, and she doesn’t seem to know just how much she’s dealing with based on her happy-go-lucky personality.

When Ruthie arrived at the shelter, no one thought the 16-year-old dog would make it. Now she’s practically a puppy again, loving every minute of her new family and her second chance.