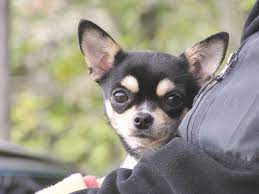 Are Chihuahuas Protective? The Harsh Truth

Are you wondering if Chihuahuas are protective?

Are Chihuahuas protective (of their owners)?

Chihuahuas are protective (of their owners). They guard you and easily stand up to other bigger dogs. But Chihuahuas can be overprotective, too. They do this by showing aggression against other people and pets. They yap, growl, bite and show dominant behavior.

Why are Chihuahuas so protective?

Chihuahuas are so protective because they see you as family. If you treat them well, they will reciprocate by protecting you. However, this may be a result of small dog syndrome. That’s how they compensate for their small size by being aggressive. Or you may have reinforced the behavior.

Five reasons why Chihuahuas are protective

Dogs have always been pack animals. In the wild, dogs in a pack have higher chances of survival. That’s because they could protect each other from other predators.

Hunting was also more accessible because they could hunt larger prey.

They slept in close quarters at night to stay warm and safe. The leader slept at the top and the subordinates at the leader’s feet.

This behavior was passed down to the dogs of today. So you may notice your Chihuahua sleeping on your feet.

That’s because your Chihuahua looks at you as a leader. They recognize you as the one who tells them what to do. You’re the one who feeds them and takes care of their needs.

Their instinct kicks in, hence the need to protect you. Even at the cost of their own life.

You have probably heard of Chihuahuas that saved their owner’s life.

Take Manchas, for example. This Chihuahua from California died protecting a 4-year-old from Pit Bulls.

Another Chihuahua named Fifi died protecting children from a dog in North Salem.

A Chihuahua named Pockets saved her family twice! The first time, she woke up her owner, who had a stroke.

The second time, Pockets shielded her body to protect the owner’s grandchild from a rattlesnake. Unfortunately, the venom killed her.

The same thing happened to a 10-year-old Chihuahua named Cooper. He died saving his owner by wrestling with a venomous snake.

But not all heroic deeds end in death.

For example, a Chihuahua named Chloe saved her family from a house fire. And now, her family looks at her as their hero.

These are just the ‘small’ ways Chihuahuas show their appreciation.

Once your Chihuahua forms an attachment with you, their goal is to protect you. That’s with the help of their sensitive nose. They can smell chemical changes in your body.

What you sow is what you reap. Sometimes you may not be aware of this.

This commercial is a bit exaggerated but true. With just one good act, the dog repaid it in many ways.

They’ll repay you often if you take care of your dog’s needs. Even if it means endangering their own lives. Dogs are selfless that way.

Do you have a good relationship with your Chihuahua?

If yes, then you’ve found a best friend for life.

Are you familiar with the short-man syndrome? Short men show aggressiveness to compensate for their lack of height.

Could this syndrome exist among small dogs?

This has piqued the interest of some researchers. Perhaps the curiosity arose from witnessing confrontations between small and big dogs.

The small dog barks and advances and looks ready to pounce. But the big dog doesn’t do anything to show they’re the boss.

To find out the answers, the University of Sydney conducted a study. They gathered data from 8301 dogs belonging to 80 breeds.

The results showed that small dogs are more aggressive regardless of breed.

They exhibit undesirable behaviors. Like mounting people and objects and being noisy.

The study also noted that ‘the shorter the dogs, the less controllable their behavior is…’

It’s tough taking care of a dog abused by its previous owners.

For some dogs, the trauma made them more aggressive. As such, it will take time for the dog to trust anyone. Especially a new owner.

Bless your good heart if you adopted a dog from an abusive owner. It will be challenging and requires lots of patience.

But keep on treating them well. Sooner or later, they’ll warm up to you. And since dogs are intelligent, they will reciprocate the kindness you show.

The best way to do that is to protect yourself.

As dog owners, it won’t be your intention to encourage destructive behaviors. But sometimes, you commit the mistake without realizing it.

Let’s say you have a Chihuahua and a Labrador.

You know how big a Lab can get compared to a Chihuahua’s tiny size. You’re more likely to scold the Lab and pet the Chihuahua if they fight.

That’s because the Lab is more extensive and can maul the Chihuahua easily.

But why is it not the other way around? Why not scold the Chihuahua and pet the Lab?

The University of Sydney’s study has an interesting take on this. The researchers deemed this unwelcome and dangerous in large dogs.

So you tell the Lab to ‘Stop.’ Meanwhile, you pick up your Chihuahua and stroke its head.

Now let’s say you only have a Chihuahua for a pet. You reinforce destructive behaviors in other ways.

Some friends visit you. Your Chihuahua protects you by pouncing at them. Instead of scolding your Chi, you all end up laughing it off.

You think it’s cute how a tiny dog can be so aggressive.

Another factor here is when you consciously approve of the behavior. Your Chi snaps at your friends, and you let it.

Here’s another way you reinforce the behavior: you let them snap at strangers during your walks. At the dog park, you let your Chi bully the other dogs.

Isn’t it funny seeing how your Chi can send big dogs running? That’s because they’re protecting you, right?

But not reprimanding them sends the wrong message. Your Chihuahua ends up being overindulged.

And that reinforces their bad behavior.

Three tips if your Chihuahua is overprotective

We modify behavior for the following purposes:

There are many techniques to do this. These include habituation, extinction, response substitution, and punishment.

Caution: Don’t use punishment. It could traumatize your Chihuahua and make them fearful or more aggressive.

In truth, these techniques are not complex. But behavior modification requires a lot of time and effort.

You need to keep doing the technique until your Chihuahua learns.

Socialization and training must begin early on. This is to avoid their protective nature from becoming a problem.

They must see it in you if you want them to have calm, protective behavior. And they will respond to what they see in you.

#3: Do not encourage bad behavior

No matter how cute it appears, do not tolerate bad behavior. Whether it is excessive barking, nipping, or biting.

As soon as your Chihuahua displays lousy behavior, address it responsibly. Do not let them snap at strangers. And prevent them from being aggressive toward other family members.