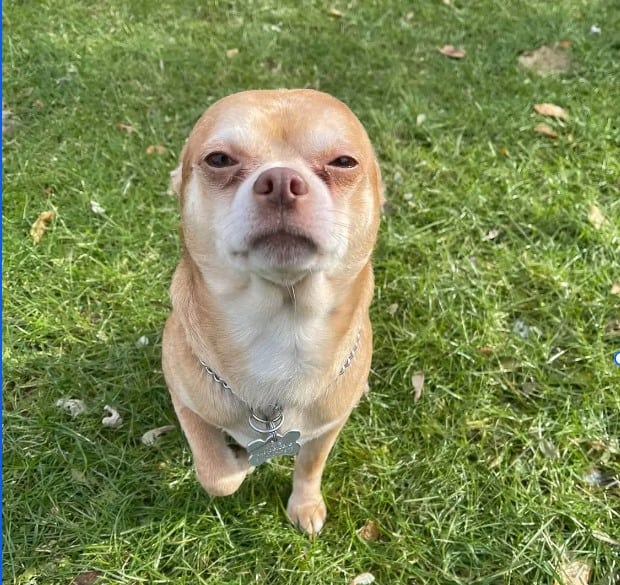 This pup’s adoption ad went viral due to his foster parent’s honest description of the adorable canine. They called Prancer a “Chucky doll in a dog’s body”.

But luckily, Prancer the chihuahua has found his forever home!

In an interview with Today, Davis said she came across the unusual ad posted by Prancer’s foster parent Tyfanee Fortuna.

“I had a dog that I adopted probably about seven years ago, and I raised him from a puppy”. He was a Chihuahua/Jack Russel terrier mix,” said Davis. “He had a lot of the same qualities as Prancer. He was a little neurotic and he barked a lot and he didn’t work well with other people and other animals. I spent a lot of time working with him and understanding his personality and learning about myself through him.”

Why Prancer was the Obvious Choice

After Davis went to rehab for marijuana addiction several years ago, she was forced to surrender her pups. Both of her pups have since been rehomed to new families.

Davis is now three years sober and works at the rehab facility where she stayed. She wanted to welcome another dog into her home. That’s when Prancer came along.

“Reading about Prancer brought back intense memories of the dog I still love so much”. That’s when she wrote in the email to the Second Chance Pet Adoption League. “They were very similar in demeanor. But, looking into Prancer’s eyes in those pictures, I saw the little sh-t Doodle I love so much. I am not looking to replace Doodle. But, I am looking for a companion that I can take proper care of and give a loving home.”

Not long after contacting them, Davis traveled to New Jersey to meet Prancer.

A Hopeful Future for Other Pups

“We got there and we just connected,” Davis told Today. “Prancer took pretty well to me. Eventually, I took Prancer for a walk and he wasn’t nipping at me or biting at my heels. We just got along. With my story and the fact that I didn’t come off as incredibly crazy, everything seemed to go well. He went home with me that day. He was a perfect little gentleman in the car.”

Prancer has now been living in Davis’ home for over a week. He is slowly but surely adjusting comfortably.

“He’s actually really great on walks,” she said. “I’ve walked by people. There have been other animals on the other side of the street. But, he just kind of ignores them. We’re one week into the adoption and he’s really changed my life. We’re both adjusting.”

Before Prancer’s adoption, the adoption center said they were hopeful the Chihuahua’s story would have a happy ending like this.

“We are hoping the extra interest sparked by Prancer’s surprising media craze will translate not only into him finding his perfect person but also into some of our other tougher little frenemies finding that as well,” the League wrote on Facebook. “Prancer would be so angry if he knew how much good he can accomplish!”